After listening to her EP constantly, seeing Maren at C2C and watching her C2C introducing concert, I was looking forward to her debut album. I was not disappointed.

The album opens with Sugar.  It is a very modern country pop song. It has a recurring run down that is very catchy. The song builds to a powerful chorus, which really shows of Maren’s voice. The plot of the song is a simple love song in which the partner is referred to as sugar.

Rich is a song I think everyone can relate to. We’ve all been in that situation when we have thought or said ” if I had a pound for every time I’ve…” This song takes that idea, and details Maren’s experiences with love, both good and bad. I like the fact that the song has a rock underlay but it still sits firmly in the country genre.

A personal favourite of mine is My Church  –  a song I can relate to. It tells of how Maren’s antidote to the problems of the world is to put the car in drive and have the radio on at full blast. This is a really good song with a good music video.

The mood of the album is turned down a notch with I Could Use a Love Song. The premise of the song is Maren wants to escape to a world where things go right, and this is best  demonstrated in a love song. This track shows off Maren’s sensitive side in both melody and lyric. It proves that Maren is a diverse writer, which is good to see.

The pace picks up again with 80s Mercedes I think this will be a real crowd favourite, during which the crowd can rock with Maren. The song also possibly gives us an insight into Maren’s personality, when she claims to be a 90s baby in an 80s Mercedes. Listening to her music it is possible to hear traces of yesteryear in her sound. So there could well be some truth in that sentiment.

Drunk Girls Don’t Cry is pretty self explanatory. It is a song that girls who have had their hearts broken can sing along to and try to heal in the process.

How It’s Done is a typical modern country love song. However the song is unique in its sound because Maren’s sound is original. The song is about dating someone in the early stages of the relationship.

In contrast Just Another Thing is about that itch you shouldn’t scratch but can’t help yourself in a love context. At this point in the album I felt that I had familiarised myself with Maren’s sound, and this song is firmly in her style.

Listening to I Wish I Was , I got the feeling that this was a song for the slow dance at the end of the night. However listening to the lyrics it is a song of longing for someone you can’t be with. I imagine this song would go down very well in a film scene that describes that very situation.

Second Wind is another pick yourself up song. The song makes me think of a phoenix rising from the ashes. Maren states that the more you put me down, the stronger I will be second time around. I like how Maren delivers that sentiment.

The album ends on a slow number titled Once. I think the theme of the song is best described by the title lyric “don’t forget when it’s all said and done, you loved me once”. It is arguably not the happiest subject to end an album on, but in country music mellow songs are common. 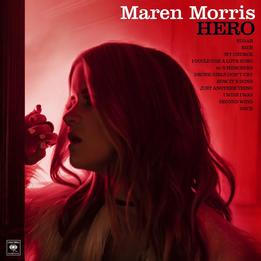 I really enjoyed listening to this album and reviewing it. I like the fact that Maren’s sound is contemporary country pop but it has a unique sound to it, at the same time. Maren’s subject matter is very current and I think will appeal to a younger audience. Maren’s roots are clearly country but it can be heard in her songs that she has other influences in her music too. I think this really helps Maren create such a unique sound. I really hope she returns to the UK soon to perform some of these songs.