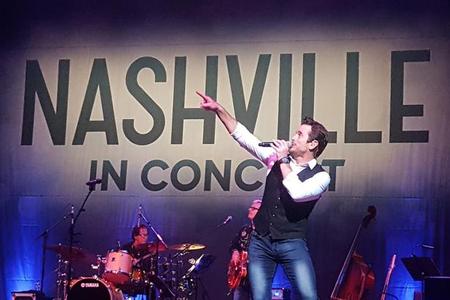 seemed that things were just going from strength to strength for the then ABC drama. A worldwide tour surely meant that the global appeal of the show made it an almost un-droppable part of their programming roster… then they dropped it. In the weeks leading to the show it seemed that the tour may turn into a somewhat sombre goodbye from the cast and not the celebration it should have been, however, days before the cast boarded their plane the producers Lionsgate and CMT/Hulu announced that they had come to an agreement to pick up the show for Season 5. The party was back on!

Thanks to the ever reliable traffic on the M62 and a two and a half hour drive from Leeds to Manchester I arrived at The Bridgewater Hall at 7:45pm having missed the first song (I’m told it was Chris Carmack ‘It’s On Tonight). On a side note I always find it incredibly frustrating that venues don’t communicate more on what time things are set to start. If I’d not checked on Twitter where someone had asked the question I’d probably have intended on arriving between 8 and 8:30. Lucky really. Just a little on the venue, I’ve never been a huge fan of The Bridgewater Hall, it’s quite a spacious venue that doesn’t really lend well to intimacy. It’s usually used for classical music and opera etc so it was a little disappointing to see when the show was arranged there. It turns out that I was misled with that feeling and it was  the perfect place for the show.

The atmosphere on the night was fantastic. The fans were all absolutely pumped to see their favourite actors/characters in person. Sometimes it gets a little annoying being a man of 28 in the middle of a bunch of screaming young women but, hey, they were enjoying themselves. The stars and musicians themselves were also having a brilliant time and took the time to chat to the crowd in between songs. Englishman Sam Palladio (Gunnar Scott) received a rapturous reception when he hit the stage and, of course, Mr Charles Esten’s (Deacon Claybourne) first appearance brought the roof of the joint.

The stage on the night was almost a revolving door with the stars all taking turns in performing and throwing some duets in there. Each time someone returned to the stage they were greeted with all the enthusiasm as if it was the first time.

My biggest highlight on the night was Chris Carmack (Will Lexington). As well as performing great versions of his songs from the show including I’m On It he also showcased some of the material from his brilliant solo EP Pieces of You. His performance of the title track (played on a guitar that his Twitter followers will recognise that he built himself!) was outstanding. He played all of his own guitar solo’s and even popped up on the saxophone to help out Clare Bowen (Scarlett O’Connor). Chris explained how he honed his musical chops playing the blues in empty bars and he showed what a great effect that had had on him here with some brilliant playing.

The biggest surprise for me was perhaps that the cast didn’t play more songs from the show itself. I have no issue with it as I love the fact that these talented musicians get the chance to showcase their work on such a big stage but, looking at a crowd which was predominantly made of young fans, I couldn’t help but feel some of them would be disappointed by not seeing more ‘in-character’ moments from the actors. Of course, we did see a lot of the songs from the show and they went down an absolute storm.

Clare Bowen offered one of the more tender moments of the show when she dedicated a song to her brother who is currently undergoing cancer treatment and for whom she recently donated bone marrow. The song was followed with a very loud and extended applause. Joined on stage by her fiancé on guitar Bowen showed that she’s not a million miles from her eccentric and loveable character on the show.

The show was split into two halves with an interval in the middle which worked quite nicely. When they came back out we had more of the same. As the show reached it’s conclusion Charles Esten picked things up with a cover of Elvis joined by Clare Bowen and his own rocky He Ain’t Me. The set was finished with all four stars on stage (including Sam Palladio on drums) for one of Esten’s own songs about being on the road. The lights went down and they all left the stage with a thunderous applause from the crowd bringing them back out for a song which Charles Esten described as being like “the show’s signature song” A Life That’s Good. The song was dedicated to those who lost their lives in the senseless tragedy that occurred in Orlando last weekend – poignant considering the Will Lexington gay storyline in the show.

It was interesting to look around the crowd on this night as it was a real cross section. We had the usual types who’d stuck on their Stetson and boots, some in their C2C t-shirts (there are always a few at every UK country show these days!) and some that seemed like fans of the show but maybe not your average country music fan. This just shows what a great thing Nashville and it’s cast are doing for country music and especially country music in Britain. People who once expected Dolly Parton and nothing more are now realising that the clichéd rhinestone covered side of country isn’t all it has to offer. There is great song writing on offer and even better musicianship. The band that supported the stars on this night, which was led by ‘the man behind Deacon’s guitar Colin Linden, were as tight a Nashville country band as you will find and laid the foundations for this great show.

All in all this was a fantastic show from four of Nashville’s brightest stars and turned a venue which can be a little impersonal into their own front room. The cast were clearly as happy as anyone to be there and the fans let them know how much they were loving it every step of the way. Now the show has been picked up by CMT and lives to fight another day hopefully we will see more from these fantastic musicians on our shores (selfishly I want Jonathan Jackson over here!). Not only did this night prove that Nashville is alive and well it proved that these ‘actors’ are some of the most talented performers on the circuit today! 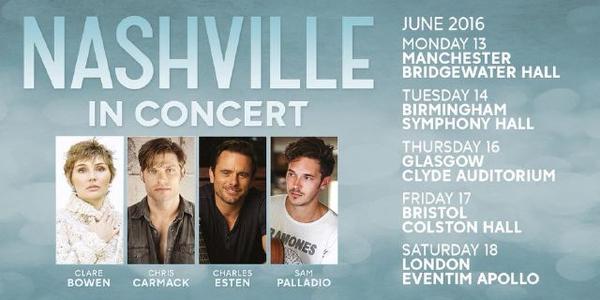