It’s hard to believe that, having just released their debut album Meat And Candy, Old Dominion have been together as a band for eight years. In various guises the band have written songs for The Band Perry (Chainsaw/Better Dig Two), Chris Young (Neon), Dierks Bentley (Say You Do) and more.  Last years release of the single Break Up With Him began putting the band on the map and, along with an extended touring including stadium shows with Kenny Chesney, the anticipation for this debut album was high. They got esteemed Nashville songwriter Shane McAnally on board to produce and what we have is Meat And Candy.

The album kicks off with the infectious Snapback. The song bounces along nicely and along with it’s catchy ‘Woah-oh-oh-oh’s’ this is bound to be a big hit at the bands live shows. Lyrically it’s a little more modern thinking than the rest of the current country songs about girls.

Next up is the laid back Half Empty. Again, it’s a song about watching a woman but done in the lyrically poetic way that Old Dominion seem to manage with lines like “Is your glass half full or is it half empty? Are you only having one or one two many? Are you drinking alone or having one more with me?” It’s a song with a great vibe that doesn’t necessarily grab you at first listen.

Wrong Turns is a song that starts off quite subdued but then builds into an epic chorus. It’s a decent country rock song. Much like the songs before it it’s a song that deals with subjects that are very familiar in the country genre but Old Dominion manage to put their own slant on this.

Much like Snapback the next track Said Nobody uses a modern phrase and, admittedly in this case, I was a little hesitant to take it seriously. The song itself is great however. It’s witty lyrics and almost reggae infused guitars make for an infectious tune. “Don’t come any closer don’t give me a kiss, ‘cos I don’t wanna taste your lips, said nobody ever” show off the bands wit in their lyrics.

Crazy Beautiful Sexy follows this, which is an ode to how meeting the right person can make you change your views. It’s funky guitars throughout and chorus of “Crazy, beautiful, sexy, unusual, innocent, provocative, so classy, you’re rockin it” is a sure fire to get the crowds going at a live show. Once again this song highlights the lack of fear that the band have far using modern language and musical styles that pull from all sorts of genres.

The next song mellows the tone out a little in the acoustic driven Nowhere Fast. This song changes perspective to looking back on the times that you’ve had. It almost feels that lyrically this could be the follow up to Wrong Turns. By this point in the record it is definitely a welcome change of pace and fits nicely.

The band clearly shows that they aren’t worried to poke a little fun at themselves with the fun Beer Can In A Truck Bed. I can’t help but think that the song title and the line “crush this town like a beer can in a truck bed” are said with a little irony. Either way it’s a fun song without too much depth.

Next up is the song that was the break out single for Old Dominion. Break Up With Him is a laid back song about trying to convince someone to end their relationship so that you can be together. As always with Old Dominion the lyrics are light hearted and witty and the song is just catchy as Hell. If the opening line of “hey girl… what’s up” doesn’t give you a little smile then nothing will.

Song for Another Time is the perfect example of how clever the guys in Old Dominion are as songwriters. It references songs from Elton John to Marina Del Ray in its lyrics. It’s a big and catch song and the chorus of “let’s be brown eyed girl, sweet caroline, freefalling, small town Saturday night, before you lose that loving feeling, let’s go dancing on the ceiling” almost acts as an ode to the amount on influences the band have which have made it through onto the record.

Til It’s Over is another song where the band present their laid back look on life. Lead singer Matt sings “It is what it is, til it was what it was, let it do what it does til it’s over”. It’s a catchy song about not worrying too much in life and just taking it as it comes.

The final track on the album is my personal favourite. Co-written by the great Shane McAnally We Got It Right is a sad and haunting look back on an ended relationship. The slide guitar and simple acoustic throughout help this song chug along to the memories of times gone by. It’s a sad song and not one to listen during a break up unless you want a good cry. 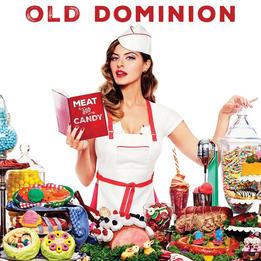 All in all this debut record from Old Dominion is a breath of fresh air. It’s mix of clever lyrics and pop grooves make it a great listen. Some of the songs perhaps lack a little bit of depth and this is where the album can fall down but still make for great easy listening. When the band have spoken about the album title they said they had sat down and realised they had the ‘candy’ in songs like Snapback and Beer Can In A Truck Bed so needed to add the ‘meat’. I have to say that without the likes of Nowhere Fast and We Got It Right I wouldn’t rate the album nearly as highly. It’s a great debut record from a band that are clearly incredibly talented songwriters and musicians. My biggest criticism is that I’d like a little more ‘meat’ with my ‘candy’.
Recommended Tracks

Snapback, Said Nobody, We Got It Right 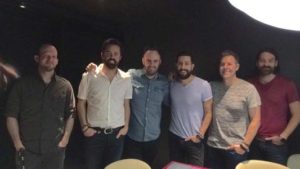 Check out our interview with Old Dominion here!