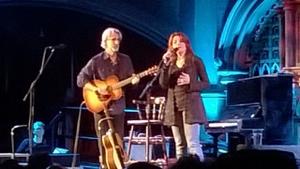 Chapel in Islington is as a music venue. Having only just returned from our first visit to Nashville, I was reminded of course

of The Ryman Auditorium, the Mother Church of Country Music, as it’s more fondly known and although we were sitting in

slightly uncomfortable pews, we had a great view of the stage.

gigs over the years. Dean Owens describes his music as Celtic Americana from Leith via Nashville, drawing both from his

Scottish roots as well as his American heroes. His latest album, Into the Sea was recorded in Nashville and his half hour set

was made up mostly of songs from this latest release. He said at the beginning that his songs were very melancholy,

apologising in advance if he was too miserable but I found him a confident performer, with a soulful voice and I enjoyed the mix of songs he chose to sing with only his guitar to accompany him.

My favourite song was Valentine’s Day in New York, a romantic song he wrote about being alone on Valentine’s Day in the Big Apple and surrounded by couples. This was his first release from the new album and is a good song to listen to first if you don’t already know his music. I would recommend you to check out his new album, especially songs like Virginia Street and the very poignant The Only One. He finished with a beautifully wistful song recorded some time ago with his five-piece Whiskey Hearts band called Raining In Glasgow and used by the BBC to promote the Celtic Connections festival.

Although we’d bought tickets for this gig because we know and love Rosanne Cash’s current album, The River and The Thread really well, we found ourselves familiar with many of the songs she sang at this gig and there were clearly many lifelong fans in the audience. From the minute Rosanne walked onto the stage with her husband, John Leventhal, both carrying just their guitars, we knew we were in the presence of country music royalty. Really. They both had such presence and kept us all entertained for ninety minutes without a pause.

Rosanne began by playing five songs in a row from the new album and with each song, she told us the story behind how it came to be written. She said that they had gone on a road trip back to the south where she’d grown up and that the river of the title was the Mississippi and the thread came from a quote from the lady who makes the beautiful coats she wears on stage. ‘You’ve got to learn to love the thread, Rosanne,’ she told her when Rosanne was struggling to sew just like her. This became the fabulous A Feather’s Not A Bird and was one of many evocative stories she told about her time writing this album.

Each song took on an even deeper appreciation for us once she explained the meaning behind it, including Etta’s Tune, one of my personal favourites and written about Etta Grant, the wife of Marshall Grant, Johnny Cash’s original bassist. She told us how every morning on waking for the sixty-five years that they were married, she would say to her husband ‘What’s the temperature, darlin?’

She then sang a few songs from some of her other albums, including three from The List, an album released in 2009. The 12 songs on the album were originally from a list of 100 classic country songs that her father, Johnny Cash had told her about when she was 18, recommending that she get to know them to expand her knowledge of country music. To my husband’s delight, she finished this set of three songs by singing Sea of Heartbreak, a cover of the Don Gibson song, which she recorded with none other than Bruce Springsteen. There are other guest performers on this album, such as Elvis Costello and Rufus Wainwright, making it definitely worth a listen if you’ve not already had the pleasure. John Leventhal produced this album and he slipped easily back into the guitar and vocal accompaniment on these songs just as much as on the newer ones. His virtuoso guitar playing was as much a star of the show as Rosanne’s singing.

Rosanne went back to her wonderful storytelling after this, telling us how they had stood on the Tallahatchie bridge, located just outside the town of Money, Mississippi. This led on to an unassuming rendition of Bobbie Gentry’s famous song, Ode to Billie Joe, just as powerful a song now as it was when it was first released and so well-suited to Rosanne’s lyrical voice.

After another couple of wonderful choices from the latest album, including the majestic song about the Civil War When the Master Calls the Roll, Rosanne asked for requests from the audience. This was truly a sweet moment when some requests elicited groans from her and complaints to her husband that ‘I don’t remember the words to that one any more, honey’ and others clearly delighted her because the fans remembered songs from so long ago. She sang a beautiful song The Way We Make a Broken Heart written by John Hiatt, which she recorded back in 1987, which went straight to number one. This was followed by another song from the King’s Record Shop album, Tennessee Flat Top Box, one of her father’s old songs, although maybe not one that most of us would know but a traditional country classic.

After another song from The List and her very first hit from the album of the same name, Seven Year Ache, she went back to her current album to finish with the song, Money Road. At this point, she had been on the stage for over one and a half hours but it hadn’t felt like it to us – the time simply flew by. She told us about the history surrounding the town of Money, mentioning the tragic death of Emmett Till and the subsequent impact on the growing Civil Rights Movement and linking everything back to the famous Tallahatchie bridge. As I said, we really felt like we had been in the presence of the best that country music has to offer.