I have to start by saying this venue is a dive!  Hadn’t been here before & I will not be in a rush to go back!  The room was

above the pub, the pub itself was ok, but the hall – your feet stuck to the floor, there was only a very limited bar service – ie beer on tap downstairs, only in bottles upstairs, so if you wanted a proper pint you had to go downstairs which involved 2 doors which were push on the way down, but pull on the way back, not easy when carrying 2 or more drinks.  There were no seats at all & there was nowhere to put your drink, you had to keep hold of it, pretty tricky taking photos!

Fortunately these issues did not make any difference to the music!  First to take to the stage were Southern Junction.  For me & 2 other friends this was the 3rd time in a week we had seen these guys perform.  We saw them at FSA Fest on 30th July, we then attended their EP launch party on 4th August & now we were seeing them again!  Uber fans or super stalkers?  Either way, Katie Jayne and Carlos Heath appreciate our support!  They were joined this evening by Chris Payne on keys.  This is the last time Southern Junction will be performing together for quite some time as Katie returned to her native Australia on Monday.  Having seen them perform in such quick succession & having spent some time with Katie, I now feel like a friend is leaving, so goodness knows how Carlos feels!

They did a quick sound check & decided that the 1st song would be a proper sound check & they went into Lady Antebellum’s Need You Now.  Sounded great to me!  Katie then explained that she was having to return home, to which Carlos called her an immigrant & then shouted “Go home”!!  Don’t think he really meant it!

They then sang Inescapable.  Katie explained they had just launched their debut EP Running Out of Time, and they would be performing it in it’s entirety tonight.  She then tipped a wink to myself and my 2 friends saying it was lovely to see some familiar faces in the audience.  Crazy was next, which is apparently Carlos’ favourite track on the EP.  I Want To, which is the 1st song they wrote together followed, for this Chris played guitar rather than keys.  Katie then said that Chris had another gig to go to so was telling them to hurry up & stop talking inbetween so much.  Carlos’ guitar chose this moment to decide it needed some fine tuning!  Chris really did not look impressed!!  Funnily enough next up was Running Out of Time, the title track of the EP!!

Carlos then went to put his guitar down, trouble was Glen had pinched his guitar stand!  As a result Carlos had to precariously 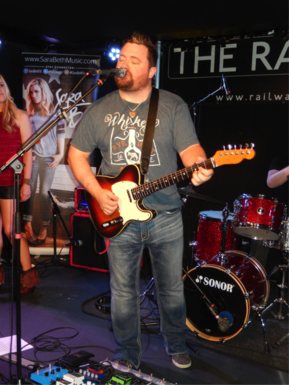 balance his guitar on the edge of the stage while they sang the last track on the CD, Song 5.  Katie said she had come up with a title for this song, but Carlos hadn’t liked it.  Someone from the audience shouted “Well Blur have Song 2!”

This ended Southern Junction’s set.  Hopefully the EP will sell well and we will see Katie back on these shores in the not to distant future.  I really hope Carlos stays with the Country theme too (he was originally more of a rocker).  It is obviously going to be difficult for them both to re-adjust again now, but the future is bright.

Next was the turn of Glen Mitchell.  I am fairly certain most people will know of Glen, if you don’t, where have you been hiding?

Glen’s family hale from Essex, although Glen has been calling Nashville home for many years now.  He and SaraBeth are both performers in their own right, but they also play together a lot.  This was my 1st time of seeing them both perform and I was quite excited!  They had a full band with them this time, which apparently is the 1st time they have done this in the UK.  On guitar was Christen Cole (who is beautiful & has a voice to go with her looks!) On drums was her husband Michael Ball (Not to be confused with the Aspects of Love Michael Ball!) and on Bass was Darren, who is actually French Canadian!  The band members have come across from Nashville with Glen and SaraBeth for this tour & none of them have ever been to the UK before! 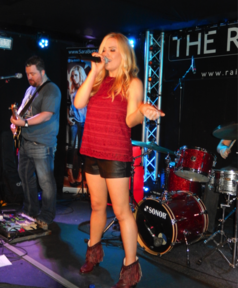 He then said he went on tour with Darius Rucker and he had 2 weeks writing with him.  The next song came from that period, but wasn’t written with Darius.  Amazing Again is a beautiful track, apparently it was written on a beach in Malibu, can think of worse places to write a song!!

A fun track, My Car is Waiting Outside was next, which I found rather funny as Glen had literally just taken his car key out of his jeans pocket & thrown it to the side of the stage!  I am not sure he even realised the timing of that gesture, but as I say, it amused me!  He then took a couple of moments to tune his guitar and went into 2 lines of Free Falling before going back to My Car.

He then sang a mash up of Robbie Williams Angels, The Beatles Hey Jude and Oasis Don’t’ Look Back in Anger and back to Angels.  Very clever!