Friend of Six Shooter Sasha McVeigh is one of the underrated talents of UK country music. Whilst people have made a fuss of The Shires thanks to the big PR budget of their record label Sasha has been grafting hard on the road and working towards the release of this debut album. The title I Stand Alone speaks volumes of Sasha’s independence and drive to succeed.

The opening track on the album is Mr Brown Eyes which is a mellow acoustic love song. It showcases Sasha’s smooth vocals and doesn’t overcomplicate things with the acoustic guitar and pedal steel blending nicely together. It’s a nice upbeat love song to kick things off.

Stupid Girl is a little more hard hitting and in your face with it’s electric guitars and regretful lyrics. Again the quality of Sasha’s vocals is brilliant. You can hear the Nashville influences in the music and it’s easy to see why Sasha has been so well received in Music City.

The latest single from the album is the summery Someone To Break My Heart. Accompanied by it’s lighthearted music video the song is a fun twist on looking for someone to love. It’s a great song to enjoy sitting outside on a hot day.

The title track on the album I Stand Alone kicks off with a banjo, just another example of the rootsy country influence that Sasha has in her sound. Lyrically the song is quite similar the Hunter Hayes Invisible in that it’s about feeling like an outsider but embracing the fact. The song boasts a superb guitar solo and builds into a really epic number.

You Only Live Once is a sweeping number about making the most of life. There is a wonderful pedal steel guitar that adds superb atmosphere to the song. It’s a mellow and almost dreamy song that fits well with the positive mood of the album as a whole.

Hot Mess gets things rocking a little more with some heavy guitar riffs and leads. Sasha’s smooth vocals fit nicely over the top of the harder edged music but could at times do with a little more bite. Again the song is a great example of the quality of musicians Sasha has got together for this record. Lyrically it’s in a similar vein to a lot of the Nashville music about going out and letting loose.

Time of My Life moves things back in a more folky direction. It’s a pretty and summery song that seems to be in Sasha’s wheelhouse where she feels most comfortable of happy acoustic numbers.

Crooked Road has some wonderful slide guitar in its intro. Lyrically it’s quite similar to Rascal Flatts God Bless The Broken Road – in fact it’s very similar in it’s tale of life’s ups and downs that lead us to where we will end up. It’s one of my highlights on the album and really is a beautiful song. Sasha’s vocals are perfect and the backing vocals compliment this perfectly. It would have been easy to over do the production on this number and ruin it but it’s pleasing to see that Sasha has stayed away from this.

No Strings Attached Romance has a Santana esque guitar intro sounding like it’s been lifted from Smooth. The song itself is definitely a little more bluesy that others on the record and this is a good thing. The vocals have a real attitude as Sasha sings about romance in the City of Sin and make for a song with a slightly more seedy edge (in a good way!).

Two Ships rounds off the album by going back to the upbeat folk roots that Sasha seems to love. It’s another easy listening song which ends the album in a nice relaxed way.

After this we have an acoustic version of Stupid Girl and a ‘work tape’ version of You Only Live Once which both add a little meat to the end of the album. 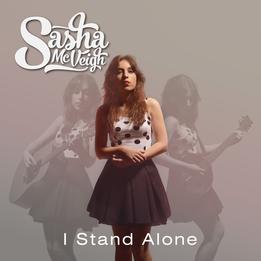 3. Someone To Break My Heart

5. You Only Live Once

12. You Only Live Ones (Work Tape)
Overall

This is a very strong debut from Sasha McVeigh. She enters the world of UK country at a time where The Shires and Ward Thomas have already dropped debuts that have made waves but this record feels different. There’s something altogether more genuine about this album – now I’m not having a dig at the other two but there is a real passion behind what Sasha does. If you’ve ever met her you will know that she is a kind-hearted woman with practically no ego at all and that comes across in the music. She clearly loves country, folk and acoustic music and this comes across in the song writing. There is a little bit of everything and some outstanding musical performances. My only criticism is that the vocals could do with a bit more bite and power on some songs but this may be something that develops in time. All in all I’m excited to see how Sasha’s career continues – for me she is one of the real spearheads of UK country.