When I first heard that Aerosmith’s front man Steven Tyler was due to release a country album, I was both sceptical and intrigued, most people know Steven for his high pitched screams, funky vibes and rock music, not to mention his eccentric personality. For over 40 years Steven has lead the rock band Aerosmith, producing classics such as ‘I don’t want to miss a thing’ and ‘Walk this way’, so to now hear that his debut solo album would be in the country genre, I was excited to take a listen. If you’re a fan of the show ‘Nashville’, you would have seen him appear on the show singing a version of the song ‘Crazy’, made popular Patsy Cline. This gave us a slight insight on how Steven would fit into the Country music scene by combining his appreciation for Country music and his well-established history in rock music, in order to produce his new solo album ‘We’re all somebody from somewhere’.

The album kicks off with the song ‘My Own Worst Enemy’, where Steven sings about how he could blame numerous things or people for his own faults; however, he knows deep down that he is his own worst enemy… “I could blame goodbye even though I said it”. I believe it is a song about ruining things for yourself before anyone else can. The theme is very country with the mention of Whiskey and the loss of love; the instruments used to make the music are in great correlation with the lyrics as they are both dark and moody to help express the true theme of the song. There is also a great instrumental at the end which shows similarities to his roots in rock music.

The title track of the album ‘We’re All Somebody From Somewhere’ is next up, the song opens by showing a little bit of Steven’s personality and we continue to hear more throughout the song. It has a very funky beat that has a country twang to it which makes you want to dance along with it. I love the message this song sends by saying we’re all from somewhere different, no one is really the same, however that is the one thing we all have in common… ‘Some left, some in the middle, some white, yellow, black or red’.

Hold On (Won’t Let Go) is one of my favourite’s music wise, I love the rustic and gritty feel, as well as the descriptions used in the lyrics… ‘In the dust, catch my footprints, summer heat’ Steven’s voice compliments the music and lyrics perfectly with this tune. The song paints a picture of a proper country cowboy who is a nomad and does not reply on anyone but himself. The song massively resembles the theme song for the series ‘Sons of Anarchy’ musically, if you have seen the show, you would see that Steven’s song would fit in perfectly with the scenery and the tough exterior of it.

The next song on the album is ‘It Ain’t Easy’, things slow down a bit more here where we see a more sentimental side to the record. Steven sings about how difficult it is to find love… ‘It ain’t easy, when you’re out there searchin’, Tryin’ to find the one’. This song if quite repetitive, however the lyrics are likely to be very relatable for a lot of people. The country sound continues with the instruments used to accompany the lyrics.

The lead single from this album was ‘Love is Your Name’ and rightly so, this is a fun, energetic and catchy song. It very much resembles ‘Mumford and Sons’ with the folksy sound. ‘Tell me all your stories, leave some open for me. Write your name into this song’ in this song Stephen is singing about a love that he is waiting for, when the chorus kicks in you get a slight rush as the tempo increases. I get very happy vibes from this record, it encourages you to always believe in love.

I didn’t think a song could get anymore uplifting and then I heard ‘I Make my own Sunshine’. This is a great feel good song, with the opening lyrics ‘Everything is wonderful, everything is great and I’m as free as a bird outside my window pane’ the song gets more elevating as it goes on. The clapping and the instruments used throughout are precisely what the song needs to go alongside the positive lyrics that encourage you to smile and be happy, no matter what comes your way.

Things slow down again with a song about a ‘Gypsy Girl’, the gentle, sweet opening music eases us into a song about a love that was always on the go. Stephen sings ‘Love is like a string of pearls, while I was waiting for the strand to break’, which to me, hints at the fact that he was always ready and waiting for her to leave again. The slight crackle in the background throughout, gives the impression that you are listening on an old vinyl record player which helps transport you back to their love story.

‘Somebody New’ gets you right back into the country feel with the music and what seems like a lot of use of banjos. This record describes one of those situations where you try and act over the top happy and fun after a break up just to cover up that you’re actually unhappy ‘I’ve been fakin’ this smile all day, keepin’ up with this masquerade’. The jolly tune seems to also act as a disguise for what the lyrics are truly meaning.

Back with the slower tempo ‘Only Heaven’ is up next. This is in and out a love song with the opening lines confirming this… ‘You’re more than a miracle, an answer to a prayer’. With the return of the electric guitar and heavy drums, this takes you back to Steven Tyler’s days with Aerosmith as the music increases with the chorus, as do Steven’s vocals as he sings loud and proud just like some of his older tunes.

Sticking with the electric guitar, the tempo picks up with ‘The Good, The Bad, The Ugly & Me’. This is a good time song where Steven sings about how he will never sugar coat anything and basically explains that ‘it does what it says on the tin’ when it comes to him, with lyrics like… ‘I ain’t the kind of guy just wanna walk you to your door’, judging by these lyrics you can tell that it is a cheeky song and really emphasises his personality, if you’ve ever seen him interviewed, or judging on American idol, you will know that he is extremely flirty and cheeky. I believe this record is one written very honestly about him in a fun-loving way.

The next song is ‘RED, WHITE & YOU’, this follows in the footsteps of many other current country music, it’s mainly about love and America which is shown in the lyrics… ‘All I need is red white and You’. It’s a very patriotic song with a great tune and Steven mentions all the things that America is known for, which includes the 4th of July, summer nights and ‘girls making dreams come true’. This to me sounds like a fun song that should be playing on the radios all summer.

‘Sweet Louisiana’ follows which is an easy going record, although Steven speaks of a girl who is so sweet, yet seems like she is just a tease explained with lyrics like… ‘Baby, won’t you please, sting me with a tease or two’ the mood of song seems quite breezy and relaxing, with country sounds from beginning to end.

Next is ‘What Am I Doing Right’ a song that to me, slightly resembles ‘Amazed’ by the country group Lonestar. Not only are the lyrics of a similar subject, the lead up into the chorus very much resembles the chorus of the Lonestar record. It’s another love song about how he does not believe he deserves this amazing girl he has… ‘Tell me what it is I’m doin’ right ‘Cause I don’t wanna mess this up tonight’. I love how it shows off Steven’s vocals as the music does not over take his voice, so the lyrics resonate with you a lot more.

‘Janie’s Got a Gun’ was originally recorded by Steven Tyler’s band Aerosmith. The remastered version has been given a darker and rustic sound to give it more of a country feeling. I prefer the new version as I believe the slower music, along with the duskier tone help to show what the song is really about, so that lyrics such as ‘They say when Janie was arrested, they found him underneath a train’ reflect the music equally.

Last on the album is another cover of a song, one that is not his own. ‘Piece of My Heart’ was originally recorded by Erma Franklin in 1967. I am a huge fan of Steven’s take on the record and with the help of the backing vocals from The Loving Mary Band it still manages to keep the timeless sound that once appeared on the very first version. The electric guitar and slightly rockier vocals give the song a little more edge and provide more encouragement to sing along to the ‘Come on, come on, come on, come on and Take it!’ which if you’re anything like me is already hard not to do. This is a great song to round off a very respectable debut country album. 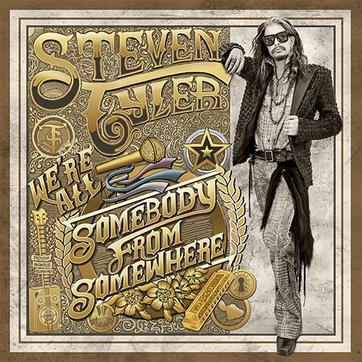 Although I started off slightly sceptical about Steven Tyler’s debut into country music, I must say I was pleasantly surprised. After being so used to listening to his rock music, I wasn’t sure how he would compare to classic country tunes, however we get to see a darker side with songs like ‘Hold On (I Won’t Let Go)’ and ‘My Own Worst Enemy’ where Steven’s huskier tones complimented the tacks perfectly. We also got the chirpier side to country music with songs with songs that expressed Steven Tyler’s personality like ‘Love is Your name’ and ‘I Make my Own Sunshine’ which also expressed hints of folk music as well. Not to mention the bluesy feel that appeared in many of the songs. It was nice to hear hints of rock music is some of the songs, as well as re-mastered versions to fit his new place in country music. This is an album that that is great for all moods and I hope he continues on his quest into country music.