Thomas Rhett is a country star that isn’t afraid to break down some walls between genres. With his debut release It Goes Like This in 2013 we had the funky Make Me Wanna so with the 2015 follow up Tangled Up I’d expected something that the country traditionalists would lose their stetsons over.

The album kicks off with Anthem. It sets the tone for the album, there’s a nice acoustic guitar riff with a beat over the top whilst Rhett sings about an “all night anthem, ain’t nobody going to bed”. It’s a fun party tune to get things going. It’s kind of typical of a lot of modern country which combines more country songs with a pop/hip hop twist.

The lead single from the album was Crash and Burn. This reminds me of Make Me Wanna in the sense that it’s got a bit of soul and funk to it. It also sounds like the kind of song that Bruno Mars would produce – clearly an influence for Rhett who recently released a cover of When I Was Your Man. The song is catchy, upbeat and fun.

opens up South Side. The song is again a more pop or r’n’b number. It’s a good tune but people

who are looking for some traditional country should stay clear.

The second single from the album is up next in Die A Happy Man. This one takes a step away

lovely slide work. It’s got ‘future wedding song’ written all over it. Lyrically it’s a great track about

asking for nothing more than love.

Vacation follows this up and does very little for me. Rhett turns from heartfelt crooner to

borderline rapper. It’s basically a song about drinking and partying on holiday. It’s not great… it’s

not terrible… but it’s not great.

Like It’s The Last Time takes a turn back to a more contemporary country road. It’s a decent song

with a big chorus. Decent stuff.

Next up is T-Shirt, which is a decent tune about a girl, wearing his t-shirt. We’ve all been there. Although if I wrote a song about my girlfriend wearing my t-shirt it’d be a lot less ‘you look amazing’ and a lot more ‘get that off, wear your own f*cking clothes’…

Single Girl is a song with a big chorus and show’s off some great vocals from Rhett. I’ll be honest, lyrically it plays into the hands of those ‘bro country’ haters but it’s decent enough.

My hands down favourite on the album is The Day You Stop Looking Back. As far as I’m concerned this is one of the songs of the year. It’s musically fantastic and lyrically spot on. It’s funny that I’ve based a lot of this article on the presumption that most people will look at Tangled Up from an ‘is it really country?’ point of view. Well, this is most definitely as country as it gets when it comes to lyrics. Great song.

Tangled Up greets us with a Daft Punk-esque intro. It’s definitely the polar opposite of the previous song on the record and makes things feel a little confused. At this point I’m not really sure what this album is meant to be. It’s basically Bruno Mars again…

Jordin Sparks lends vocals on the big ballad Playing With Fire. It’s a great song with two brilliant vocals on it. The choice of Jordin Sparks to sing on the song perhaps says a lot about Rhett’s direction for his music.

The penultimate song on the album is I Feel Good featuring LunchMoney Lewis… apparently. It’s a decent song but again just flips things back to that funky disco sound. I don’t really get it at this point.

The album ends strongly with Learned It From The Radio, which is a fantastic homage to small town life, and the lessons that we learn from the music we listen to. It’s noticeable on the more ‘country’ tunes on the record that Rhett suddenly gets the twang back in his voice. It’s a great song though and hopefully a single. 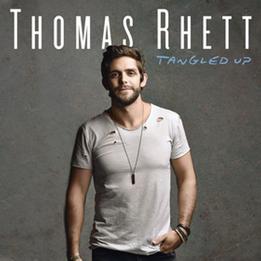 9. The Day You Stop Looking Back

13. Learned It From The Radio

This album really is the definition of a mixed bag for me. It’s not that I have a problem with the songs which aren’t as stylistically ‘country’, in fact it’s quite the opposite, I love some of those songs but the album as a whole just feels lacking in direction. I’m not sure Thomas Rhett really knows what type of album he wanted to produce. Rhett clearly has a lot of influences from different genres and that is a good thing but when producing an album where all of those genres are represented so obviously in no particular order makes the whole thing feel very disjointed. There are some great songs on Tangled Up including Die A Happy Man, The Day You Stop Looking Back and Learned It From The Radio but they just aren’t surrounded by anything that compliments them. It’s a decent effort with some great stand out tracks but just doesn’t work for me as an album.

Die A Happy Man, The Day You Stop Looking Back, Learned It From The Radio