Tim McGraw is an artist who has released a steady stream of music over the last few years. 2013 saw Two Lanes of Freedom which was followed up by 2014’s Sundown Heaven Town and now, in 2015, we have Damn Country Music. With some artists it can take years between albums but McGraw seems to be enjoying knocking them out as much as we enjoy listening to them. It was with great anticipation that I listened to Damn Country Music to see whether the quantity had been combined with quality.

The album opens up with the almost Celtic sounding Here Tonight. It’s a feel good song and great album opener. It also features Tim’s daughter Gracie McGraw. With parents like Tim and Faith Hill she clearly looks set to follow on the family business with a great performance here.

Losin’ You starts off with an electronic sounding intro. It’s a modern sounding tune with references to Hank Williams and the rodeo and a big chorus. A great example of how Tim McGraw has brought his sound into the 21st century whilst maintaining his country sensibilities.

How I’ll Always Be opens with a great slide guitar. It’s a reflective song about accepting who you are. It also has another Hank Williams reference – Tim was clearly listening to a lot of Hank at this time. It’s a real foot tapper with a fantastic guitar solo.

The title track Damn Country Music slows things down a little bit. It’s a tribute to the music that we all love and has given McGraw a career. With its pedal steel guitar and thought provoking lyrics it’s country through and through. This song has a writing credit from the fantastic Jessi Alexander which is enough for me.

Love Runs is fast becoming one of my favourite songs on the album. It’s an upbeat number with a huge sing-along chorus. This is Tim McGraw at his best for me and hopefully will be a single.

What You’re Lookin’ For lowers the tempo again slightly. It’s a heartfelt ballad about a break up and hoping that the other person finds what they’re looking for. I’m sure many a person will shed a tear over this song and a tub of ice cream at some point…

Sittin’ On Top Of The World is a mid tempo number that doesn’t do a huge amount for me. It feels a little run of the mill really and doesn’t offer too much.

Next up is Don’t Make Me Feel At Home. This is a classic country ballad about being lonely and heartbroken. It’s wailing pedal steel give it a real classic country vibe.

Want You Back is another big ballad about… wanting someone back. It’s classic country heartbreak and almost follows the same theme as the previous song.

Big & Rich get on board for the next song which is the upbeat and fun California. The duo add some great harmonies to the tune which is perfect for playing loud on a sunny day. John Rich co-wrote this one.

Humble and Kind is up next. This is another favourite of mine from the album and could almost be a mantra for how to live your life. It’s no secret that McGraw is a family man and this heartfelt number could speak to anyone. It’s one to play the kids… I don’t have any so I’ll just listen to it myself and try and learn something!

Everybody’s Lookin’ takes a slight genre shift into a more funky territory. In all honesty this isn’t a side of Tim McGraw that I enjoy, it doesn’t feel as natural to him and feels like it’s just there to hit a certain audience.

Things go back to natural McGraw territory with the piano driven Kiss A Girl. It’s a nice enough tune.

The album is finished off with Country and Western which acts as a tribute to the performers of country music. It’s a great tune with some brilliant references to country of years gone by including a chorus which quotes ‘The good Lord willin’ and the creek goin’ rise’ and Willie and Waylon. It’s the perfect end to an album which feels like it’s taken some steps back to Tim McGraw’s more classic country roots. 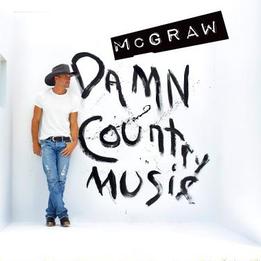 When Damn Country Music was announced my first thought was ‘wow, another Tim McGraw album!’ He seemed to be knocking them out on an annual basis and that can always have a detrimental effect. The good news from this album is that it really is a very strong effort. It seems like the album is more like the Tim McGraw of the early noughties . It’s almost a refreshing change to have an album released which doesn’t rely on crossing genres too much and just provides us with some straight up country. The songs have the usual meaningful content – especially in the case of Humble and Kind – that we expect from Tim McGraw. It’s not groundbreaking by any means but it’s a solid country record.