Vince Gill is a well established name on the country music scene. When I saw his latest offering on ITunes , I had to have a listen. I was not disappointed.

The album opens with Reasons For The Tears I Cry which is a country song with a great rocking backbeat. I really like this song. The subject of which is just after a break up, Vince has reasons for the tears he is crying.

The title track is the second track on the album. It takes the mood right down to a warm winter’s evening mood. The song consists of Vince listing all the bad habits he has parted with, except his lover, who is his last bad habit.

Me and My Girl is a bouncy little number that is a documentary in the day in the life of his relationship with his girl. It was a very positive song and highlights the joys of being in a relationship.

Like My Daddy Did is a really touching song. It tells the story of a guy meeting a girl who is insecure, and wants to be treated the way she was by father. The guy spends the song promising he will treat her right.

Make You Feel Real Good is a honky tonk blues song with a wailing harmonica in the background. The song is simply an advertisement from a guy to a girl about his boyfriend credentials.

I Can Do This is a slow power ballad type song, that is about a relationship that has broken down. One party has moved on and the other is finding it hard to take.

My Favourite Movie is a slow number that likens being in a relationship to a favourite movie, because after all movies are based on real life.

One More Mistake I Made begins the collaboration section of the album. This particular song is sung with Chris Botti. It details the common country situation of regretting a breakup.

Recent Grammy award winners Little Big Town feature on Take Me Down, it is another song with a strong backbeat. The song is about how love can overpower one half of a relationship.

Cam rounds of the collaborations when she and Vince sing I’ll be Waiting For. It is another slow burner and the subject matter is self evident from the title. I thought Vince and Cam’s voice were a great match and they sang a lovely duet together.

When It’s Love restores the album to the same state as the opening track. With the backbeat returning with force. The song discusses what happens when you love someone.

In my opinion Vince saved the best track till last. The late great George Jones, was probably a huge influence on Vince, which shows in Sad One Comin’ On (A Song For George Jones). The song is solely written by Vince, however listening to it, you would be forgiven for thinking it is a cover of a George Jones number. It is a great tribute to a country music legend. 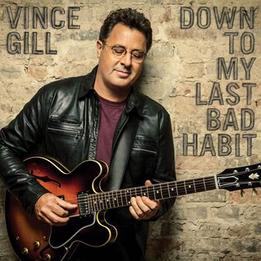 Having got into country to follow music in real time, I tend to focus my attentions more on up and coming artists, rather than well established ones. However, this album shows that the old guard have still got it. I really enjoyed the album and the way it was laid out. I also liked the fact that Vince recognises current acts such as Little Big Town and wants to work with them. There was a well rounded mix of songs and subject matters present, well worth a listen.

Reasons for the Tears I Cry, Sad One Comin’ On (A Song for George Jones)