Willie Nelson wrote the country standards that many country artists still perform to this day and his ‘Highwayman’ album with the highwaymen band (Cash, Jennings, Kristofferson) is a cult classic. Willie Nelson’s voice has always had a talkative quality to it which I’ve always liked. Nelson has recorded 142 albums, that’s including collaborations and compilations (love ‘certified hits’, pure class), and 11 grammy’s in addition to a selection of other awards. Willie Nelson is Country music Royalty, but lets not forget about Merle Haggard, someone who has hit the number one spot on music charts 38 times! This collaboration is not the first they have produced together, but the sixth, which reached number 1 on the billboard country albums chart.

To sum it up there’s a great video shown below describing the album. There are some other shorter video’s about this album on the WillieNelsonVEVO youtube channel that are worth checking out too.

The writers for the songs vary from track to track, some of which were written by Nelson and Haggard but Don’t Think Twice It’s Alright is by Bob Dylan and the others are by various country music artists.

Django and Jimmie sets the tone for the album. The uplifting feel goes hand in hand with a calm vibe which dissipates through the rest of the tracks. It’s All Going To Pot picks up the tempo which leads on to the smooth feeling of Unfair Weather Friend. This smooth feeling returns in the later tracks Live This Long, Where Dreams Come To Die, Somewhere Between and The Only Man Wilder Than Me. The quirky Missing Ol’ Johnny Cash appears with an arrangement that apparently was thought of on the spot in studio, and this quirky dance is repeated again in Driving The Herd. Alice In Hulaland sounds exactly how you would think, with the steel guitar and dry guitars giving that Hawaiian feel with a touch of harmonica to add a bit of the deep south to it. The care free sort of flavour is prominent in Don’t Think Twice It’s Alright which is mirrored once more in Swinging Doors. Contrasting to previous tracks, the piano is the main accompaniment to ‘family Bible’ where as the next track, It’s Only Money showcases the guitars and banjos. 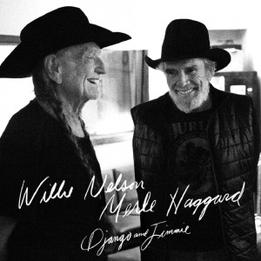 As a country music fan, to say I don’t like Willie Nelson is basically blasphemy. His earlier albums such as Good Times (check out the track ‘Ashamed’ from that album, it’s got a cool crooner vibe to it which I like) are basically 10/10 for me. His voice from earlier albums is much smoother and of a higher quality than this album, but saying that his voice isn’t up to the same standard is a bit harsh seeing as he is now 82! He’s pretty much nailing it for that age, and the exact same thing could be said for Merle Haggard, who is also crushing it at the age of 78!

It’s difficult to be objective, especially as I prefer the old classic country sound to the new pop sound of todays country. It’s a great album but the problem is that the gravitas from Nelson’s and Merle’s earlier music is very strong. The whole album has a fun loving feel which really comes across in the video above, something that is evident from the fact that the whole album was recorded in just 3 days! They clearly had the attitude of, “screw it, lets just have fun” and they’re real pros to be able to pull it off.

It’s an inspiring album to listen to, especially if you know Nelson’s and Haggard’s earlier stuff, as it goes to show that it’s never too late to try something new and make music. A cliché I know, but something that I think is synonymous with the album.