American Young are a duo made up of Jon Stone and Kristy Osmunson, both of whom are songwriters and have written for other people (including Blake Shelton, Lee Brice, Kenny Chesney). Like many other songwriters they recently decided to try out being a recording artist themselves. They were a Pop up act at C2C this year, I only know this as a friend of mine saw them, was really impressed with them & told me about them afterwards. They also appeared recently at the Nashville Meets London Festival in Canary Wharf.

Be Here is the 1st track and it starts quite oddly with just 1 note being played on the piano (I assume) several times, this gives it quite a haunting start. It turns into a beautiful melody with words lamenting a time when a relationship was new and young and exciting. Now they want to take it back to the way it was and just spend time with each other without any of today’s distractions. We are off to a good start, I am liking this so far.

Track 2 – American Dream immediately reminds me of The Shires! It starts by sounding very similar to Ben & Crissie & I think on a Playlist you would double check to see who it was. With this track they want to leave the rat race behind them and go and live out in the back of beyond (in America) where there is peace, quiet and tranquillity. There is a definite yearning in this track and I am sure it is something that most of us aspire to!

We all know the path to true love is not a straight and easy one and Love Is War tells us that there are times it needs to be worked at and fought for, if you want it. I love the sentiment behind this track.

Point Of View is a great track and is definitely my favourite. Jon and Kristy are singing to each other, as if they are having a conversation. There is a real camaraderie between the 2 of them and it really comes across in this track when they are giggling, agreeing and disagreeing with each other. They are like a married couple disagreeing with each other, especially when Kristy says “It depends on the day whether he does or doesn’t hear a single thing I say”! This track has a really good feel about it and a great sentiment.

I listened to Party in the Dark a few times before I got what it was about, although the title and line “shadows on the ceiling, twisting twisting” were huge clues! It is a very tasteful song about hooking up with someone for the night!

Better on You is about how everything, clothes, jewellery, tattoos, seems to look good on the other person, I suspect the object being sung about is idolised, whether up front and personal or from afar, we don’t know!

The next track – Eighteen features Lee Brice, an artist they have worked with before, infact they helped to co-write Lee’s number 1 hit – A Woman Like You, so this is a winning team! Have to say, this seems like an odd track to come from an American artist. Again I listened to it several times without realising why it is odd. It is about going out & getting drunk, like you did when you were 18, trouble is, the minimum age of drinking is 21 in the States, although further research suggests it differs from state to state. It also differs between beer & wine & liquor (hard stuff for us Brits!!) They want to be young & irresponsible again, just for the one night, get very drunk, suffer for it the next day, but just don’t care. I love the sentiment of this song and as life gets in the way of you partying I am sure many of us wish we could just go back to being like that once in a while, even more so if you have more money now than you had at 18!!

We then come to the oddest song on the album. Apparently this is actually a true story of when Kristy’s mother got hit by a train and survived! Not many people can boast of that! Of course, Kristy being a songwriter, she had to write a song about it – hence God Sends a Train! It is a very haunting melody about domestic abuse by a bible wielding husband/father as the underlying theme. However, after getting hit by the train and surviving, the 1st thing her mother did was send her father packing! It is almost as if getting hit by the train was the best thing that ever happened to her!

Slow Ride is again a song about taking time out as a couple and spending time on each other, blocking out today’s interruptions. The melodies on this track are lovely, Jon & Kristy’s voices complement each other so well.

The next track, Soldiers Wife (Don’t Want You To Go) is a real tear jerker! It is obvious from the title that it is about, a soldier returning to the front, leaving his wife behind, while she doesn’t want him to go. She knows he has to, but that doesn’t help. Again this is a track that really shows off Kristy’s vocal talents!

Hometown Girl is the tale of a young girl leaving her home town for a bigger world, a bigger adventure, but scared and a big part of her not actually wanting to. She knows the home town life is not for her, but it doesn’t mean she is happy about leaving it behind.

The final track Something To You is another love song and in typical American Young style it is a little bit quirky, “So here’s my heart, go on and take it, Do your best not to break it”. A great track to end on. 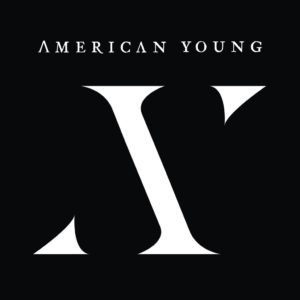 I really like this album. There are some real haunting numbers and some quirky lyrics. Jon and Kristy both have very strong vocals and they complement each other so well. I have to say, it did help that I saw American Young perform at Canary Wharf before I listened to the album, so I knew a couple of the stories behind the tracks. I really enjoyed their performance at Canary Wharf, they are a great live act, vibrant and full of energy, Kristy plays a variety of instruement, including a fiddle & her bow was really shredded by the time they left the stage! When they left the stage they said “See you next year!” – A bigger stage at C2C perhaps? I for one certainly hope so.