American Young are a band who have just arrived with their debut album, AY, but have a lot of experience 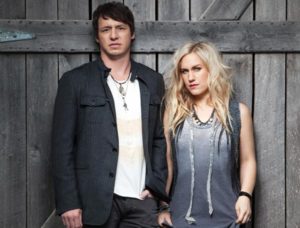 and credentials behind them. The duo of Kristy Osmunson and Jon Stone have both had relative success in the genre before deciding to get together as a duo and make some music. The band were over in the UK earlier this year for C2C and a tour with Sasha McVeigh before returning to play at the inaugural Canary Wharf Festival. We caught up with them the day after they’d played their second Manchester show of 2016…

Guys, thanks for taking the time to chat with us. Let’s start with an obvious one. Who are your major influences?

Kristy: We are influenced by so much different music. Not just country we listen to absolutely everything and I think that all becomes part of our sound.

Do you feel a sense of freedom now you’re in front of a crowd performing the songs that you’ve written as opposed to watching others do it?

Kristy: Yeah. That’s kind of what we both naturally do. We like to entertain and we like to play music for as many people as we can so the fact that we get to do this is a blessing. It’s such a privilege to be able to make as much of a living as we can playing music so we’re very lucky.

What would you describe an American Young live show as being like?

John: You’ll have to come and find out!

You’re debut album comes out on Friday. How excited are you to get an album out there to the world?

Kristy: It was incredible! We have worked for four years on this record and it’s just been a combination of a lot of peoples talents, time and effort and love, commitment, dedication and passion from such a crazy talented group of people. American Young is a combination of a lot more than just John and myself. We are so excited to see how this music is received. We are still celebrating the launch of the record!

You had Lee Brice on production duties for the record. How did that come about?

Kirsty: Lee and I signed to Curb Records about the same time a long time a go and he and I had written. John and him have written for years and years so it just naturally worked out.

Have the songs all come about since you got together or are these years in the making?

Kristy: It was both of us in different ways. There are ones that John wrote with different people, one I wrote with another person and some we wrote together. It’s been a really cool experience collaborating and working on this project… oh my gosh your country is so beautiful I can’t even handle it! We are just driving over a river it’s amazing!… Erm, sorry, there’s not really one specific way that everything comes out. We are about capturing the moment and putting down our real life experiences into the song. It’s about the whole human experience from our point of view.

You’re both very well accomplished songwriters but you chose Love Is War, a song you didn’t write, as you debut single. What was the thinking behind that?

Kristy: Like I said when we get in a room we have two different perspectives on one idea. It covers a lot of ground. It’s like having Republicans and Democrats at the same time – it covers the whole area. Love Is War was a song that some friends of ours wrote and the line ‘nobody hangs hard times on the wall’ was just so fresh and interesting and had never been said before. It said a lot about what me and John were going through in terms of the musical experience that we are at right now. We may or may not always agree but that is the relationship. That was the most honest at the time of where we were and the evolution of where we’ve come since. We also feel like Be Here is a song that’s important for this time and our culture. Everything is very temporary and disposable and we are trying to hold on to these moments by capturing them on our phone and in that we are so busy trying to filter it and make it look skinny that we miss the actual emotion of the experience.

What made you want to come over here? Obviously taking the time and money to fly over here and play shows must be a risk.

Kristy: The first time we came to Europe was the The Bachelorette which is a TV show and we were playing in Gent, Belgium and we just on a whim rented a car and drove up through Paris and Amsterdam and saw a few of the sights then a friend of ours called from the UK and asked us to come and play a charity benefit for a breast cancer foundation. We took the train over and played this little gig at a little lodge and met some really cool people. Any time we can get out of our comfort zone and away from what we are familiar with makes us grow as people and as entertainers and musicians. You are the product of the people that you’ve met and the places that you’ve been so I think as a band to be able to travel to other countries and experience other cultures makes us more understanding as human beings. Of course we are also getting to see a whole different kind of music. London on Monday night I got to go and see a punk scene that I didn’t even know existed. It’s just really cool.

Obviously if you’ve been in Liverpool you’ll have seen all The Beatles things. I suppose you will soak in a lot of that culture whilst you’re there?

Kristy: Yeah we just went to the church where Paul and John met. It’s really incredible to see. We got to go down into The Cavern. I was drinking something…

Are there any plans to keep coming back and tour more extensively?

Kristy: We would love to. The reception has been overwhelming here. We played C2C a few months a go and then we got invited back from that to play the Canary Wharf festival which was just spectacular with an incredible group of people and we got to play Manchester last time and again last night. It’s just fun to see it grow and meet all of these people who have driven from all different parts of the country to come to these shows. It’s just a really incredible crowd that you guys have out here. It’s a really exceptional listening crowd and I feel like they take music to a different level of seriousness. You can’t even really compare the reception of the two countries. Over here I feel like there’s just such a history and such a deep connection with where music comes from. Y’all kind of started the whole thing! We’re humbled to be over here.

It’s funny, a lot of American artists say the same thing. I spoke to Kip Moore recently who mentioned that less people watch it through their phones in the UK and actually take the show in… not taking anything away from the American crowds of course…

Kristy: We are working this record. We are continuing the tour to promote the album and are going back over to the States and get ready to gear up for country radio then hopefully get a single out and tour as much as we can.

Kristy: We would love it! We’d love to be the new house band for the Canary Wharf festival and C2C festival!