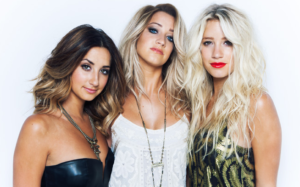 them to my attention. Made up of three sisters (Who’s first names all begin with C – clever, ey?) the band hail from Texas and packed their bags for Music City to try their hand on The X Factor. Since then they’ve teamed up with Lee Brice to help them produce their debut EP’s and the future seems bright for the trio. We were lucky enough to get in for a chat with them before they get to big for us…

Tell us a little bit about the sound of Sister C…

Being from Texas, it’s important to us to keep our traditional roots alive but at the same time we like to add a bit of “freshness,” if you will! You can definitely hear the old-school country in our songs but it has this modern-day twist that can entertain both the traditional and present-day country listeners!

What made you want to write country music over any other genre?

I think being raised around the music that we listened to growing up (Haggard, Parton, Nelson, Jones, Strait, Etc.) we didn’t really have a choice! Our hearts were already sold to Country music by the time we realized we had a writing gift! I guess you can say it just runs through our blood and is only natural to us.

When did you start writing songs?

We started exploring the idea of writing in early 2012 when we were living in Texas. We were all still in college when the show X-Factor came to town and we tried-out for the show. After that experience was over, we decided that we wanted to take the next step in our career and moved to Nashville in 2013. Once we got here, we realized we needed a lot more originals under our belt than we already had so we hit the ground running and began developing our song catalog.

Is there 1 of the 3 who write the majority?

We all have the same amount of passion for writing, but we each bring something different to the table. Celbi plays the guitar and is staple in keeping our sound through the melodies she comes up with. Carli helps us keep our songs lighthearted and witty with her quirky lyrics and Cirby is known for reaching down deep and getting those strong, well thought out lyrics that hit the audience’s hearts, which are very nice to have in our more sad ballads.

You worked on the EP with Lee Brice and Jon Stone. How did you get to know those guys?

Funny story actually; We met with Lee and Jon in the back of Loser’s in Midtown. They knew we were looking for a producer and even though they were absolutely swamped and in the middle of recording Lee’s new album they still met up with us. So the three of us played a few songs for Lee and Jon in the back of a bar, Ha! They hated to admit it due to their cramped schedule but, thankfully, couldn’t resist taking on the job as our Producers.

Jon and his band American Young are currently experiencing a lot of success here in the UK. Does traveling to Europe appeal to you?

Absolutely! We have a nice following in the UK, and we are dying to get over there and play for our fans. Hopefully sooner than later!

What normally inspires you to write a song? What is your writing process?

Well I think the obvious answer is heartbreak. We, along with every other human being in this world, have experienced it and can all relate to having a broken heart. Those seem to be the easiest songs to write. But sometimes, as funny as this sounds, you’re too happy to dive into a sad song. So it really just depends on how you are feeling that day. You can go into a write thinking you’re going to be writing a sad break-up song and leave with an up-beat tune about drinking with your girlfriends! You just never know. That’s the beauty in writing.

Do you feel like you have an advantage with being sisters, as there’s instant chemistry?

100%. That doesn’t mean it makes it any easier than the other thousands of artists out there trying to make it. However, it is nice to have someone alongside you to go down and up with.

Who are some of your main musical inspirations?

We have been inspired by the country legends all the way to the 90s Pop Stars; Dolly Parton, George Jones, Merle Haggard, Hank Williams Sr. and Jr, Willie Nelson, Christina Aguilera, Faith Hill, Martina McBride, Mariah Carey, and the list goes on. We have such a wide range of musical inspirations, it’s hard to pin-point our favorite.

What’s your favorite song to perform of your own?

I think our favorite of our own would be “Chainsmoker.” It’s our opening song to our set, we start it completely a cappella and immediately get the crowd’s attention. It’s a good feeling to see the audience’s reactions when they hear our sibling harmony for the first time.

Do you have a favourite cover you like to do?

Oh this one’s easy! Monkey Back by Beth Hart. We LOVE to rock, so Monkey Back is the perfect song to show our range and personality on stage. We intentionally perform it as a closer in our set leaving the crowd wanting more.

Which was the most emotional to write?

The most emotional song we have written would be “Once Upon A Time.” It was written about a true tragedy that happened to a family in our hometown. We haven’t fully produced it yet, but released an acoustic version on one of our Blue Room Session episodes.

Are we likely to see a Sister C album in the near future?

Yes you are! In fact, we just released a new EP on August 19th! You should go check it out. 😉

What is next for you now that both EP’s have been released, .Do you have plans to come to the UK (London) any time soon?

We are constantly keeping ourselves busy, whether it be writing new songs or in the studio recording. Our next step is getting signed and going on tour. As of right now, there is nothing on the books for heading to the UK, but it’s definitely on our list of to-dos! 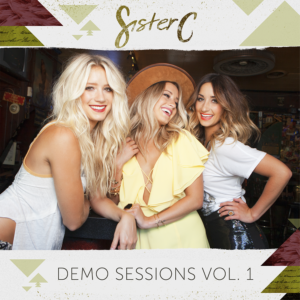