Sarah Darling is a performer who has had an amazing career already at a relatively young age. Having taken part in two reality TV shows, performed over eighty times at the Opry and supported some of the biggest acts 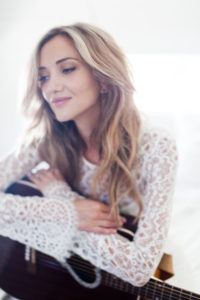 in country Sarah headed to C2C in London earlier this year. Off the back of that she decided to head back for a longer tour. We caught up with her in Nashville before heading over…

Sarah, for those who aren’t familiar with your music tell us a little about your sound?

Absolutely. I’m super excited to come to the UK and I’m on the first flight out tomorrow morning so I’ll officially be in the UK tomorrow evening. I have a brand new album called Dream Country, which is very ethereal and dreamy. I write a lot of songs about escaping and about stars and being whisked away to this dream world. It’s really a beautiful body of work and I’m excited to share it with the people in the UK.

Where do you draw your biggest inspirations from?

When I was a kid I drew a lot of inspiration from The Eagles and Fleetwood Mac then I also listened to Patsy Kline and Johnny Cash too so I’m sort of all over the board as far as major influences. I grew up loving just great music. I think my style is sort of singer-songwriter meets country music meets sort of this Norah Jones sound.

You started your career on the show The Entertainer in the US. You didn’t win the show however were advised to look towards Nashville. How much of a blessing was that?

I’m really thankful I did not win that show! It was one of those moments of your life where if one thing changed then the whole thing would be different. It was such a great experience being able to go on a national television show and be selected to be a part of it. I lived out in Las Vegas for a few months. I was in my early twenties so I really went straight from Iowa where I grew up in a small town! It was quite a culture shock! I just learned so much in the shortest period of time. I’m thankful for that because I knew what I wanted. Wayne Newton, who was the host of the show, he said “you need to be an artist!” so I did exactly that. I moved to Nashville and the rest is history.

You also took part in the TV show Rising Star. What was that experience like and what made you want to try with reality TV again?

That was more of a recent show with other vocalists in Hollywood. That was a completely different world. Brad Paisley was a judge which was one of the reasons that I wanted to do the show. I’m the type of person that is always up for new adventure so I auditioned and thought “ok, let’s go see where this takes me” and I made the top ten. I didn’t win the show but there again it was one of those great experiences and without it then I may not have been driven to make this record.

Brad Paisley picked you up from Rising Star and asked you to perform with him at the Opry. How unbelievable a moment was that?

That was one of my top five favourite moments in my life! Singing Whiskey Lullaby with Brad Paisley at the Grand Ole Opry!

Have you been back to the Opry to perform many times since?

I have. I debuted in 2011 and I’ve now played eighty two times which blows my mind! I feel really grateful as there are so many greats that come through there so I soak it all up when I’m there watching these amazing acts that have been there playing for years and years.

Is it true what people say about the magic of playing that venue?

It’s so different! I’ll you a funny story. I played there last week and I hadn’t played in maybe four or five months. I was playing once a month. I got the very first butterflies and nerves going back out and I loved it! There’s just this aura about the stage and the people who have played there. Just being in the audience – it’s such a great place. The Opry have done such a great job of keeping their name alive and keeping that brand sacred.

You’ve also supported a lot of big acts over the years. Who have been your most memorable acts to support?

I would definitely say it was Carrie Underwood. The reason why is that I grew up in this very small town in Iowa and one of the things that we pride ourselves on is that we have a really big state fair and that’s sort of where I got my start as a kid playing on the stages around the fair. They have this big grandstand where the huge acts would come through and I got to open up for Carrie Underwood there last year in front of my home crowd! That was a dream come true!

You’ve recently started making moves into the UK market. What made you want to come over here?

I have some amazing ties with England. I’m actually married to a Brit. We met in London and I’ve been there so many times. I love the people and it represents where this amazing part of my life began. I have a song on my album called Anchor which is actually written about Cornwall in England. For me releasing music in England is something that I’ve always wanted to do and I just felt a strong connection after I played C2C in March. I felt so much love and I want to come back!

You have a UK tour lined up which I understand is going to be done in the Nashville ‘in the round’ style. What made you want to take that approach?

It’s really fun for the people at the shows. What we are doing is taking turns. I’ll sing one of my songs and the other girls will back me up. It’s the most engaging concert to be able to watch. Hearing the stories behind the songs that we wrote is quite unique. It’s probably quite unique to the UK as you probably don’t get to hear that very often. We just wanted to bring something very and exciting for everyone.

What are you most excited about when you look forward to the UK tour?

There are so many things I love about England. I’m definitely going to be getting some good fish and chips! It’s the best! What I love about coming over is that I learn something new every time. I think the most exciting thing for me is that I’m going places that I’ve never been before. I been to the Cotswalds and different places close to London. Now we are covering so many places that I’ve never been so that’s exciting.

Your new single You Take Me All The Way is being released over here. Tell us a bit about that song?

It’s the last track on my album and it has this most amazing feel. When I recorded it immediately when we listened back it just sounded amazing. A little secret about it is that when we did track it I sang with the band it was this sort of one attempt with me singing and the band playing it has that vibe when you listen and makes you escape to this old vibey club. It’s kind of a playful song and everyone loves the feel of it. It’s really a feel song.

The full album Dream Country comes out next year. What can you tell us about the record?

I actually wrote seven out of the nine tracks along with others. I have some favourites. I think Where Cowboys Ride is one of my favourites and a song called Haley’s Comet is going to blow people away. It’s such an amazing story of my life and my experience in the music business.

Do you think it makes for a much more personal album to listen to?

Absolutely! I think when you are so attached to the music and these are the stories of your life and the things that you love it makes more of a connection happen when you’re playing live. I’m a big believer when you’re making art that you connect. It’s so important because you only get that one chance to connect with somebody and show them that part of you. It’s way more believable when it is so personal.

So the album comes out early next year…

We are doing the preparations now and it comes out early next year. I’ll be back! Don’t worry about that.

What are the plans for the next 12 months?

Over the next several months there’ll obviously be the album release but this is unchartered territory for me. It’s the first album that I’ve released independently for a very long time. I was signed for the last several albums. For me this is exciting and I’ve been filming quite a lot of music videos from the album which will be popping out throughout the year. They’re just beautiful I’m actually even filming on in Paris. Anything that I’ve dreamed about doing I’m doing on this album!