After being promoted by Radio 2 and a successful debut album, fans were eagerly awaiting the second album of trail blazing British country duo Ward Thomas. I think fans will not be disappointed.

The album opens with the unmistakable voices of Catherine and Lizzy doing an a capella introduction to Carry You Home. The song then dives into a thumping drum beat and the tight harmonies that the girls are famous for begins. The theme of the song is about being there for someone, be it a friend or loved one, and promising you will carry them home. It is clear to see from the opening track that their sound has developed and matured, as they have, since their debut album, but they have done so remaining true to their unique selling point, their harmonies. This a great opening track.

The tempo of Almost Easy is a polar opposite to Carry You Home. The theme of the song is equally reversed. The song details feelings of a relationship breakdown and all the plans that were made that now won’t happen, and how dealing with it all is almost easy. With the song being of a slower tempo it gives the listener a chance to be reunited or to really discover for the first time Ward Thomas’ harmonies that are so polished.

Material is a very mature song. It discusses that there is more to a relationship than just the material things. Considering the girls are only 22 years old, I was very impressed by this song. The tempo is a moderate one which I think suits the lyrics well.

The title track Cartwheels is, for me, the stand out track of the album. It documents trying to get someone’s attention who is a love interest. It is a song I think a lot of people especially younger listeners will relate too. The melody is very enjoyable to listen to and the orchestral backing track really adds to the overall sound.

I could almost do a review of Guilty Flowers by itself. It is a song that fascinates me. It is about a negative subject in that flowers given in guilt really aren’t well received, yet the tune of the song is very upbeat and positive. I think this song will go down very well with a live audience as it is a song that can be easily clapped along to. It probably is my favourite song on the album.

Lose Me is a very Ward Thomas song. By now you begin to get a feel of the sound of the album and this song slots nicely into that sound. This is a really “sock it to the ex” type song demonstrating that the girl is over it. If you are going through that situation, this song is for you. The melody is as positive as the lyrics too.

I really like Good On You for its stripped down approach. The song consists of the girls’ voices, a piano and a guitar. If you have never heard Ward Thomas before I recommend you listen to this song first as it really shows what their voices are all about. The subject matter of the song is wishing an ex well in a new relationship, by saying love looks good on you. The melody is a suitable tempo for the song.

I was quite surprised by this When It’s Not Me. Having had the pleasure of meeting the girls on several occasions they are so sweet and bubbly, I wouldn’t have expected a song that rightly says it is easy to criticise when you don’t know the full story to be something they would sing about. Maybe there is a story behind the song, which is why they wrote it. It is nice that the girls are expressing themselves in this way and showing that they aren’t afraid to sock it to the man so to speak.

Boomerang is another one of my favourites on the album. It documents a well known situation of not being able to move on from someone who you know is bad news. The tempo of the song is very upbeat, like Guilty Flowers I think this one will go down well live.

With a title such as Dirt and Gold you would be forgiven for thinking this song might be sending out mixed messages. However, the song is a very positive happy song both in melody and subject matter. The song talks about how some people are just naturally positive, in that everyone sees dirt but through their positivity they see gold.

Where The Sky Isis a clever take on a well known theme. The song suggests that one’s world maybe falling apart but with the support of a loved one or friend everything will be ok. The girls illustrate this by saying the sky is where it should be. The melody is of a suitable tempo for the song.

Proof is yet another one of my favourites. It is about being in a relationship with the right person by the fact that the relationship is going well is proof that you should be in that relationship. The melody of the song is once again a happy one.

The album closes with Safe which is has a real country waltz melody from yesteryear. The song is simply about being yourself in a relationship and it is safe to be so. This is also a stripped down song which gives the girls one last chance to show off those amazing harmonies. It is a great song to end on. 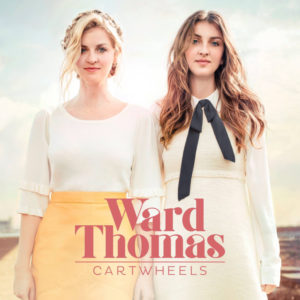 I probably should have confessed at the start that I am a massive fan of Ward Thomas, so much so I requested to do this review. The album is so much more mature than their first in every way. Having read articles about them they said that they are a lot more comfortable now in the music business than they were when they released their first album and it shows. The album has that feel about it of being made by established artists. The subject matters are more mature and presented in a completely different way to their first album. That said, they have stayed true to their original sound at the same time. This album has made history by being the first country album by British act to make number one on the album charts. I think it is an accolade that is well deserved both for the album and the girls themselves.

All of them!! But if I had to pick three I would say Guilty Flowers, Proof and Cartwheels