My last review started with train troubles and unfortunately, so does this one!! My friend & I got to the train station 50 minutes ahead of schedule as we had planned for traffic driving to the station & there wasn’t any. We were both very happy about this, meant we could get to London earlier and sneak an extra beer in before the show started. Instead, an hour and 20 minutes later we were still stood on the platform! We ended up getting to Waterloo station at 6.00 when the show started at 7.10.

This leads me on to another point. I had telephoned the venue in the morning as I had not received our tickets. The chap I spoke to was very helpful, said not a problem, I could pick them up when I got there. This made me wonder if they had even been sent out in the 1st place, especially as I wasn’t charged P&P! I wasn’t overly worried as I had booked directly with the venue. Whilst I had the chap on the phone though I asked him to confirm show times as the web site said doors open at 7.30. He said in fact doors open at 6.00 & the show started at 7.30. I posted this on Facebook, only for a friend to come back & say that Ben Glover, who was supporting, had told her he was on at 7.10! Another friend then sent a copy of a message that he had been sent, also confirming a 7.10 start!

We had arranged to meet friends in a pub beforehand for a drink & something to eat, we got there so late though we could only have a starter. Wolfed that down & practically ran to the venue, but Ben Glover was already on when we got there.

I have to say the venue is lovely. It is a theatre rather than a gig venue, but for an artist like Brandy this was fine.

Unfortunately I really cannot say much about Ben as I missed all but the last 2 of his songs, I do apologise to him for this! Ben is Irish, but now lives in Nashville. He hasn’t lost very much if any of his Irish accent. He has a new CD coming out soon, The Emigrant. In this CD he merges his Irish background with his Americana new life. The title track is actually based on his own experience of trying to gain a Green Card for America and the thoughts running through his mind as he did so. 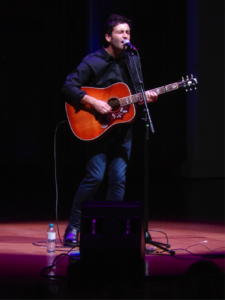 After a short break it was time for the main act, Brandy. She walked onto the stage from a door at the back with another guy, just the 2 of them with their guitars. You could feel the levels of expectation increase in the hall. I Ain’t Been Drinking was the 1st track and was met by huge applause. After this track Brandy introduced us to the guy on stage with her, Miles Aubrey. Stripes was next, followed by Big Day In A Small Town.

We were told the story of the best 2 minutes of Brandy’s life, when she performed at the Grammy’s in 2015 with Dwight Yoakam. She sang the song she had sung then, Hold My Hand.

She said she seems to have a thing about revenge songs & probably the best one of all was the next track, Hope You Have A Daughter, a song about a man who broke her heart, but in order to get revenge she hope he has a daughter who finds a man who treats her the way he treated Brandy, so he can see how much it hurts!

After You Can Come Over, Brandy said “Next up we have a happy little love song.” Miles looked a little confused & said “Do we?” Brandy laughed & said “Yes – Love Can Go To Hell!”

January 5th to Easter this year, Brandy was on a radio tour promoting her album, Miles was with her so they got to play together a lot and it shows. They work together really well and are totally in sync. The next track was the track they played the most on the tour and curiously is the only track of Brandy’s to enter the top 40. She has written tracks for other people which have been huge successes, with Mama’s Broken Heart probably being the most famous. However from her own albums, only Girl Next Door has entered the top 40 & even then, it only got to number 39. My friends & I were all amazed at this, we all thought Stripes would have got in as well, but apparently not! After the track Brandy asked if we all knew who Marcia Brady was. We did! She said the actress who played Marsha Brady, Maureen McCormick tweeted Brandy & said if Marcia Brady ever met Maureen she would hate her too!! 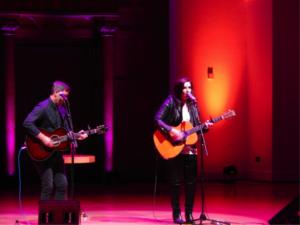 After Three Kids No Husband, we were informed as to why everything was so early. There was a 10.00 pm curfew at the venue and Brandy said she had meant it when she tweeted that after the show she wanted to meet as many of us as wanted to meet her. She said there was a really heavy fine if she broke the curfew, hence the early start. 10.00 is a very early curfew, especially for a gig!

Brandy told us she has written songs for several artists before deciding to record her own music herself. She said the next song was her very 1st song to get to number 1 – Better Dig Two, recorded by The Band Perry. The Band Perry sing this with their usual feisty aplomb, however, you would never know that it wasn’t Brandy who recorded it, singing it on the stage at Cadoghan Hall in the middle of her own songs, it fitted right in with the presentation and the sassy lyrics!

Apparently Crazy by Patsy Cline is Brandy’s favourite song, but her 2nd favourite is The Chair by George Strait and she sung this next. It is not a track I know, so I cannot compare it to the original, but it sounded pretty darn good to me!

We were then back to Brandy’s songs. She said she originally wrote the next song very loosely on a girl she went to High School with. Originally girls were coming up to her & saying “You wrote that about my sister”, then it was girls she had never met saying the same thing, then girls from not just out of town, but all over the States all saying she had written it about their sister. “Guess it struck a chord huh?” The song in question was Get High & you can see a lot of women relating to it, but then you can say that for an awful lot of Brandy’s songs! 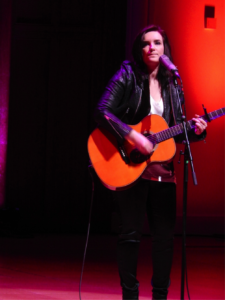 Brandy asked if we had noticed a lot of her songs are about alcohol, she said she wants to do an album purely about alcohol, this got a pretty loud cheer, so I think her audience is receptive to that idea. The next track is one that she hasn’t recorded yet, Tend To Get Drunk proving her point about booze!

The next track she said had been requested by someone who had seen her earlier in the week and had requested it, Take a Little Pill. Just as she started she dropped her pick, Miles immediately handed her his & got one out of his back pocket. Brandy said “Sorry about that, we will start that one again.”

After Hungover she said “This is normally the part where Miles carries on playing, I walk off to rapturous applause & stand out the back waiting to come back on again, however I am wearing heels & I really do not want to break our curfew so I am not doing that tonight!” This got a huge roar of approval.

Brandy then spoke about the story behind the album Big Day in a Small Town. Brandy said she grew up in a small town and it was really important to her to write about it, even more so after her father died. She said his memorial service really brought it home to her when so many people wanted to come it was held in a gymnasium in order to accommodate everyone. She said actually that wasn’t unusual. Since You’ve Gone to Heaven followed. I don’t think I was the only one who shed a tear hearing it after that story!

Pray to Jesus was the last song. 9.25, earliest I have ever known a concert finish!

The whole concert was fabulous, but I was disappointed that she didn’t sing Broke and Mama’s Broken Heart. I later found out that it was my friend who knows Ben Glover who had requested Take a Little Pill & this replaced Mama’s Broken Heart. However, seeing Brandy in a venue like this was so much better than at the O2. Although I loved her at O2, the smaller more intimate setting suits her and her music much better. Her story telling was wonderful and you really felt like you got to know her as a person.

This is also one of the joys of Country 2 Country. Brandy was an artist I had never heard of, only started listening to her when she was announced for 2015. I immediately loved her & tonight she re-affirmed that love further.

She was also true to her word, there was a huge queue of people wanting to see her & she saw them all, smiled, chatted and signed everything people asked her to sign, including a brand new £5 note and a pair of pants a girl was wearing – they were orange & grey stripped! She hadn’t clicked when she put them on, just later when she went to the loo!! In addition she saw some people twice – that will be me & 1 of my friends then! While we were in the queue the 1st time, the boys had bought more beer as the bar was still open. By the time we finished our beer the queue had almost gone so we both ran up, bought a CD each & asked her to sign that too!! She did run over her curfew, but only by about 15 minutes so I really hope she was not fined.

I also have to say about the venue. Although it is in a great location (just off Sloane Square) was a beautiful setting and a lovely theatre, you do have to wonder at some of the staff they employ. As I said at the beginning I was told the wrong information about the start time. A couple of us were told off in the interval for standing in the aisle talking to each other, we were standing to 1 side so we were not blocking anyone. Most perturbing however was that many people took to Facebook the next day to say 1 member of staff was insisting no photos and was not only threatening to confiscate phones, she was walking up & down rows doing it as well! Nowhere did it state no photography and how very rude to the people she pushed passed in order to do this. I would happily go to this venue again, but I would strongly complain about this woman.