Southern rock and Nashville vibes are about to strike yet again, with The Cadillac Three’s 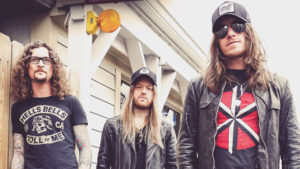 highly anticipated European tour starting in just one month. Visiting eight cities around the UK and Ireland, The Cadillac Three will be hoping see many faces singing along to their new album, Bury Me in My Boots.

The latest album, released in early August, full of guitar-heavy tunes that were all written by the band members, is nothing short of a quality rock-country project. The long-awaited and well-received record came to light four and a half years since their debut album, and has given us many outstanding tunes such as, Graffiti, The South & Drunk Like You.

The Cadillacs are especially popular here in the UK, with all of their previous headlining shows being a sell out. Not only they are frequent visitors, they also appreciate the local crowd and the huge buzz the UK fans keep making from the other side of the ocean.

With a few good tickets still left, you can catch Jaren, Kelby and Neil in Manchester, London, Cambridge, Glasgow, Birmingham, Bristol, Belfast or Dublin. If you are a little bit more adventurous and would enjoy a short trip abroad, The Cadillac Three are also playing a few shows in Germany, Spain and Netherlands. I’ll definitely see you there.