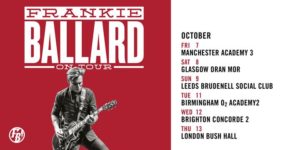 map. In the last 12 months it’s seen the likes of Roseanne Cash, Margo Price, The Cadillac Three (until damage to the roof led to a venue change) and more grace it’s stage as well as UK acts The Shires and Jess & The Bandits. As a native of Leeds this is brilliant for me. The less trips I have to make across the Pennines to Manchester or daaaarn saaaaarf to London the better it is for my bank account. More than anything it’s just exciting to see acts who I follow on social media go from huge events in the US to my little hometown. This week saw Frankie Ballard pass through the doors and I went down to catch his show.

I never know what to expect from these shows in Leeds in terms of the crowd. I remember seeing Sasha McVeigh and Sonia Leigh here and it hadn’t managed to get many through the door however Margo Price had it packed to the rafters (It seems crazy that in my hometown there are that many country fans – how do I not run into them more often?) This gig was fairly well attended especially considering the fact that Ward Thomas were also in town playing at The Wardrobe for a sell out show.

I headed down to this show alone having found myself friendless on a Sunday evening (I do have friends honestly… they were just busy… or so they say). I managed to get a good spot just behind the sound board and next to another solo viewer in the form of Pauper King’s Tim McKay. Based just down the road in York Tim can often be seen at shows in Leeds or Manchester which is really lovely to see from a member of the UK country community.

The show kicked off with the opening track from Frankie’s new album El Rio in the form of El Camino. As that unmistakable riff kicked in the crowd went with it and we were off to a flier. This was quickly followed up by Young & Crazy from Frankie’s debut album Sunshine & Whiskey.

Frankie brought along his full five piece band for the tour and I have to say they were spot on. I think one thing that you can always guarantee when you get an American band over here is the standard of the musicians and this was no different. There was some really brilliant guitar work throughout the show which was split between Frankie and his guitarist. Frankie Ballard is something of a rarity in country music in that he really is an old fashioned guitar slinger. Watching him shred through the solo on Good as Gold was as good as any touring guitarist out there today. Other than Brad Paisley and Keith Urban I can’t think of many other country stars with the same chops.

The set itself was very heavy on tracks from El Rio which was absolutely fine by me. We saw LA Woman, Wasting Time, It All Started With a Beer, Good as Gold, You’ll Accomp’ny Me and the latest single Cigarette. I have to say that album is one of my favourites this year and really showcases Frankie’s variety in his music and how far he’s come since his debut. The slightly rockier edge to the music really helped keep the show bouncing along and the band looked the be having every bit the good time.
The show was certainly high energy with Ballard interacting with the crowd and even stopping mid way through to get a photo with everyone. He’s clearly a man who is enjoying his time over in Europe. I know from speaking to acts in the past that it’s a big risk both financially and on their own reputation to head over to Europe. The fact that Ballard has not only come over here to play but has done a full tour with a full band shows how passionate he is about cracking our market. Not to mention the fact that he was over here for C2C in March and followed that with a short tour. The guy is jumping into the UK pool with both feet.

We had a little taste of his influences with an Elvis Presley medley in the middle of the set. Frankie led into this by saying that “you’re either a Beatles or Elvis person” so he was a little worried about doing this in the UK but then thought “why can’t you have both?!” and played through some Elvis numbers with his gravelly vocals really complimenting it.

The set was finished with Frankie’s most successful single to date in Sunshine & Whiskey. A few hung around for an encore afterwards but the lights came up and we were clearly done. I genuinely don’t mind this. Sometimes, after an hour and a half of music, waiting around for an encore just gets to be a pain. Especially when you have work in the morning and want to get home!

It was a show that I really enjoyed despite the fact that it probably wont be the bands favourite on the tour. With a three quarter full venue and a slightly subdued Sunday night crowd the band will probably have wilder nights on this UK tour. That’s not to say that they didn’t give it 110%.
The one thing that I loved was that there was a decent showing for a Sunday night in my home town with a home-grown country act playing down the road – that has to be a win and a great sign for the country scene. Keep it going Brudenell Social Club!