Thanks to the power of social media and two of the most gifted songwriters of their generation, in Shane McAnally and Josh Osborne, I noticed a lot of attention being paid to a band called ‘Midland’ on Friday. I’d never heard of them before but, considering the caliber of those plugging them, figured they may be worth a listen. Man, was I glad I did.

Midland is a new country music trio that hails from the town of Dripping Springs, Texas. Having already known each other for quite some time the three found common ground in music and decided to give the business a try. Now, having supported the likes of Dwight Yoakam, the band has released their self-titled debut EP.

Kicking things off is a song that was recently plugged by none other than Bruno Mars on Twitter. Drinkin’ Problem is 100% retro country. Singer Mark Wystrach’s silky vocals glide over the wail of slide guitar and a laid-back tune. Lyrically this song is amazing. It’s witty lyrics really do make it a cut above the rest. “People say I’ve got a drinking problem but that ain’t no reason to stop, People saying that I’ve hit rock bottom just cos I’m living on the rocks… People say I’ve got a drinking problem but I’ve got no problem drinking at all”. It’s a great song that really gets stuck in your head and almost acts as a reply to all of those ‘I drink too much’ songs by saying ‘so what?’.

Next up is Check Cashin’ Country which is a little more upbeat with it’s mandolin intro. It reminds me a lot of that classic 70’s/80’s country sound and the likes of Alabama or, for those more contemporary listeners, some early Zac Brown Band. One thing that I’ve already noticed by now is how good the harmonies in the band are. Guitarist Jess Carson and bassist Cameron Duddy add some great Eagles-esque vocals.

One of my favourite songs on the EP is up next in Burn Out. The lyrics to this one really create fantastic imagery of a night in a seedy and smoky bar. “Just watching rivers run down the side of my bottle, almost like it’s crying my tears” creates great imagery, as does the chorus of “watching cigarettes burn out ‘til the neon gets turned out”. Again the sound of the song is very laid back kind of California country mixed with those truth telling lyrics of Texan country music. The vocals from Mark Wystrach are again absolutely superb and just ooze soul and the heartbreak that he’s singing about.

Track four is This Old Heart, which is a classic country heartbreak song. I always talk about songs that come along at times in our life where they just feel relatable and this one for me, maybe not so much the heartbreak but the feeling of needing a break from people causing pain (ouch… that got personal quick!). “This old hearts been kicked around, this old hearts had all it can take, it needs a little less wreckin’ and a lot more affection” is the really classic country. This is another song that sounds like it could have been lifted from the 70’s.

Rounding off the album is the brilliant Electric Rodeo. Kicking off with a piano line and sweeping strings before the acoustic guitar and vocals kick in this song builds into another huge song. To say this band hail from big sky country Texas these are big sky songs. Lyrically it’s quite similar to Burn Out in setting a scene and using brilliant imagery. 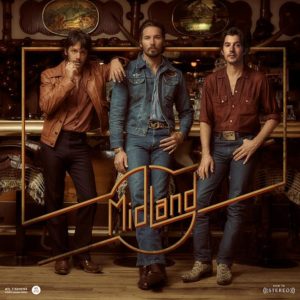 This EP really is a breath of fresh air for country music… in a sense. There are bands out there who are providing this sort of quality ‘classic’ country music but none really that have caught the interest of a label such as Big Machine – who have now signed Midland. It may be a sign that country music is turning a new corner with this type of sound making waves or maybe it’s a one off but I’m thrilled to download an EP like this. I’m not one of those who picks sides in the modern vs. traditional country debate as I believe there is space for all music but this EP really is a promising introduction to a band who have talent in abundance and are bringing back some old school country. The silky vocals, great musicianship and fantastic lyrics set the stall out for a band that could be around for a while.

This song doesn’t actually appear on the EP but it’s the only official video the band have on YouTube!

One thought on “Midland EP Reviewed”