On November 8th, I was lucky enough to attend the John Paul White gig at Bush Hall in London, having been a 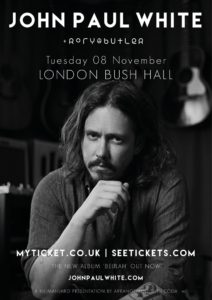 fan of his former band/duo The Civil Wars, I was excited to see which direction in which he was going with his solo music.

I recruited my sister to join me at the gig, we arrived at the venue early, so as the doors were not yet open, we went into the adjoining bar/restaurant which offered a discount for people who were attending the gig at Bush Hall, which was a great touch. They happened to make great ‘old fashioned’ cocktails, so our wait went quickly as we enjoyed our drinks.

When we entered the venue later, it was small with very dim red lights and a few low hanging chandeliers which created an atmospheric feel, judging by what I had briefly heard of John Paul Whites music, this scene was going to perfectly accompany his set.

The opening act was Rory Butler, a very mellow and relaxed artist whose songs seemed heartfelt and in the same style as White, so it was great to get a taste of what was in store for the evening.

John Paul White later entered the stage at the time we were told, he received a warm welcome from the audience and it became abundantly clear that his previous work had brought him a dedicated and excited following. He opened with a short ‘hello’ and some light-hearted humour, followed by an A Capella dedication to fans singing the words ‘I will remember you’. His dominant, yet smooth voice instantly silenced the audience as we watched in awe. The second he finished, the audience showed their appreciation with a prolonged applause.

The first official song he sang from his new album ‘Beulah’ was ‘Black Leaf’, the slow melody and sad lyrics left a haunting feeling that left the room mesmerised.

The next few songs to follow including ‘The Once and Future Queen’ and ‘Hope I Die’ were of a similar feel, the lyrics were dark and gloomy and the sound was gritty and raw. It seems that Whites days of being part of The Civil Wars were still prominent in his music as a lot of his songs had a similar vibe, which gave us the indication that John Paul White was likely to have been responsible for a lot of the song writing for the duo, it was good to see him sticking to the sound he is good at.

One song played, called ‘The Martyr’ has a very Ed Sheeran sound, which was surprising to hear, although it worked well. It was a more commercial one that I believe would do well if it was to be released as a single.

Another tune from the album called ‘Hate the Way You Love Me’ had some very heartfelt words about love, it was one of the only songs where I heard some country sounds sneak in, I’d have to say the melody and lyrics sold this song to me and it instantly became one of my favourites of the night.

Due to it being such an intimate gig, John Paul White could give a small speech about how happy he was to be making music and touring again, it seems he thought he was done with music, due to being ‘burnt out’, however being a song writer and musician he continued to have a ‘maddening loop’ going around in his head where he eventually had to start putting it all down in writing again, ready to share with his fans.
White explained that he was brought up on country music, after which he asked the audience if there were any country music fans in the audience, I naturally screamed whilst standing there in my 2016 C2C music festival t shirt! He then followed with a mesmerising rendition of ‘Everything that Glitters is not Gold’, originally performed by Dan Seals. Whites version once again instantly silenced the audience and was later greeted with a huge round of applause.

Towards the end of the gig, John Paul White introduced a song called ‘Simple Song’ using a personal story about his grandfather, growing up he worshipped the ground that he walked on, but didn’t realise he was struggling with many inner demons as he was too young. When his grandfather passed, he couldn’t understand why his grandma didn’t cry about his passing, White penned her response to him in this honest and raw tune ‘Simple Song’, this was easily another favourite of mine.

At the end White said his ‘thank you’s’ and ‘goodbyes’ and exited the stage, however the crowd were not finished as I heard one of the most determined chants for an encore I think I have ever heard, considering it was such a small place. It wasn’t long until White returned to the stage to appease his audience and finish off his set with a slightly more upbeat sound, it was clear that the audience were left satisfied, including me!

It is obvious that John Paul White has some great fans and I am certainly now a fan myself. His songs will leave you feeling haunted but you’ll want to stay for more as his sound is so mesmerising. It helps that he is rather funny and extremely genuine and humble. I wouldn’t say his style is particularly country there are a few hints of it in some songs and his song writing skills are from the heart and personal experiences. I would highly recommend his latest album ‘Beulah’ and if you ever get the chance to see him live, don’t hesitate!