You always know that an album is worth checking out when half of Nashville is tweeting about it. This was the case for the latest record from Brent Cobb in Shine On Rainy Day. Brent Cobb certainly comes from good stock as a country artist – his cousin Dave Cobb is a highly respected producer who earlier this year released the Southern Family album which featured artists from Miranda Lambert to Zac Brown as well as Brent. Having penned songs for the likes of Luke Bryan, Little Big Town and more Cobb is now getting some recognition of his own.

The album starts with the rootsy Solving Problems. As soon as Brent’s voice kicks in you feel like you could be listening to a more countrified 1960’s Bob Dylan. The tune chugs along with very simple instrumentation and Cobb singing over the top. It’s a very ‘sitting on the back porch putting the world to rights’ type of song about hanging out with a friend and talking about everything and everything as you do with a beer and some time to kill.

Next up is South of Atlanta which is a slow burner of a song. This is a song where Cobb’s superb way of words is really apparent in the lyrics. It’s about travelling around the Southern states and the things that you see. I particularly love the line “there’s a town in south Georgia, so humble and small, if you sneeze driving through you wont see it at all”.

The World is another song that really relies on the heart and soul that Brent has in his voice. Much like the other songs before it there is very simple instrumentation behind it but the real focus is on the vocals. There’s a real feel of a live performance to the song too. It’s so simple but very beautiful.

The next track is Diggin’ Holes. It’s a little more upbeat but is still just as simple as the tunes before it. The clever lyrics are reminiscent of some of the older country songwriters, for example, “I outta be working in a coal mine, Lord knows I’m good at diggin’ holes”. This is one of my favourite songs on the record and is really reminiscent of the old (should I say this phrase?) outlaw country.
Country Bound is another tune on the album that I really love. For me this is almost like a kind of stripped back Alabama song. It’s all about trying to fit in in the big city but really just pining to head back out to the country “where the people all say hi and the stars fill the sky”. It’s got a great countrified guitar solo at the end that I really love.

Travelling Poor Boy is another reasonably upbeat number. It’s at this point in the album where I’m starting to feel there’s a lot of similarity in the songs. It’s not easy with a simple singer-songwriter album to keep things sounding fresh and different though so maybe that’s a little harsh. It’s still a great song but I feel like this is an album that is difficult to sit and listen to in one sitting.

The next track is a song that I first heard on Andrew Combs record All These Dreams. On that album it was called Rainy Day Song but here Brent Cobb has recorded it as Shine On Rainy Day. The two co-wrote it together and unusually both put it on their albums. I say unusually but it’s not that unusual considering the fact that it’s a great song that’s brilliantly written and poetic. One line that really sticks with me is “A friend once told me, he said ‘boy you sound so lonely, all these cheating, leaving, done-me-wrongs, have you ever heard of a happy song?’ Offended I set down my glass, smiled and let the moment pass, tabs on me if you think I’m lying, laughing ain’t a pleasure ‘til you know about crying”. Beautiful stuff.

Let The Rain Come Down is a little more heavy in it’s sound that the previous tracks (that isn’t saying much really!). It’s a really good thumping song where Cobb’s vocals really convey the emotion of the lyrics about being hurt and done wrong. “You put a curse on me and one on the river and now my crops wont grow no more, I got a hollow heart, a pocket full of nothing, my soul wont rest, my eyes wont pour” is sung with a real fire behind it. This is the kick up the arse that this album needed.

The penultimate song on the album is Down in the Gulley. This song slows things down a little bit but is still a lot more upbeat than the earlier tracks on the album. It’s autobiographical sounding and talks about someone’s grandfather who makes moonshine and how he helped him make it as a child. Whether or not Cobb ever did this I don’t know but it’s a really good song.

The album is rounded off with Black Crow. It’s a decent blues country number with a really mean slide guitar featured in it. As always Cobb’s great voice really lends to the pain of the track. 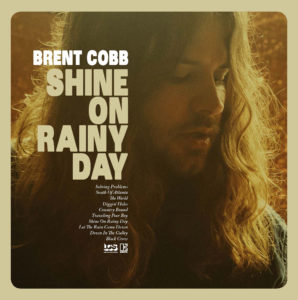 Overall
This album is one that came with high expectations for me after reading some of the biggest names in country recommending it and I can clearly see why. The brilliant and clever lyrics along with Cobb’s wonderful voice make for a really great album. A lot of people may listen to this and think “wow, this is like nothing else about at the moment” but that couldn’t be further from the truth as there is a real stable of great country songwriters like Cobb, Andrew Combs and Sean McConnell doing some great stuff. As with all albums like this I found it hard to listen to in one go as it can be quite slow and lack variety but that’s the nature of the beast for singer-songwriters at times. Only when it gets to Let the Rain Come Down do we see things pick up. All in all though this album is well worth having a listen to – if you’re hoping to stick it on and have a couple of beers and a party I’d be careful though!

Six Shooter Rating
7 out of 10

One thought on “Brent Cobb – Shine on Rainy Day Reviewed”