John Paul White was formerly known as 1 half of the Grammy award winning duo The Civil Wars, in 2014 the 2 parted ways and White has now gone solo again, after first releasing a solo album in 2008 before his success with Joy Williams. After personally being a fan of The Civil Wars, I was excited to hear which direction White was taking with his latest album ‘Beulah’

The album kicks off with ‘Black Leaf’, a folky and solemn tune with lyrics about a breakup. The whole style of the song is very haunting and leaves you feeling sad for him. It is obvious that these lyrics are straight from the heart as they have a very honest, yet simple sound.

With a soft rock sound, next is ‘What’s So’, this is a song you could imagine being featured on a show such as ‘Sons of Anarchy’ due to the sombre style and echo in the vocals. The lyrics push forth the gloomy feel as he sings about not getting too big for your boots in a great way. The increased sound of the guitar and drums accompany the subject of the song perfectly.

Next up is ‘The Once and Future is Queen’, a heartfelt song about an old love moving on to someone new as he was ultimately not good enough, the continual subtle guitar in the background can become quite repetitive, however it is saved when the chorus kicks in and brings us more sounds and a different tone in his voice.

‘I Want to Make You Cry’ follows, the title itself is enough to make you realise the sort of tone this song will have, another slow, gloomy song about wanting someone to feel more strongly. The tune gives off a similar sound to a carousel ride, which makes it seem that much more daunting and creepy, which perfectly corresponds with the lyrics being sung.

Next is ‘Fight for You’, another rockier and faster song on the album. It comes at the right time after listening to the more heart-breaking and slower ballads; the lyrics imply fighting for someone rather than them leaving, so it is a nice twist on the rest of the album that we have heard so far. The more aggressive sounds of the guitar help reinforce the lyrics and the idea of getting up and fighting for someone.

Following is ‘Hope I Die’ which is about the aftermath of a break up, that feeling of not wanting anyone else and not coping so well with the situation. The funky tune gives it a slightly misleading sound as it does not sound quite as sad as the lyrics actually are. The music is a great way to entice the listener as the title may not sound too appealing at first. A great example of never judge a book by its cover as the song overall is raw and a great listen.

‘I’ve been over This Before’ is next and it features The Secret Sisters, this song has an older sound and the sisters are a great addition to give off a 1940s type vibe. I feel like it is very different to hear sounds like this creep into modern music and it’s great to hear the combination of the 2. Not to mention the context of the song perfectly fits the type of music playing and reminds you of a song you may have heard during war times.

‘The Martyr’ is next with a more commercial sound; I feel as though the opening music that is played as a steady beat throughout resembles Ed Sheeran quite a bit. The subject comes across rather self-deprecating, however as it reaches the chorus it is much more positive and motivational.

‘Hate the Way You Love Me’ is one of my favourites, a great all-consuming love song where White sings about all the flaws he has, yet his women will always love him no matter what. This comes across as a sentimental and emotional letter to his other half and I for one find myself melting into this song as I imagine many others will. The hint of country sounds appear in this song which makes it that much better.
Back to another sadder song called ‘I’ll get even’, a great ballad with simple music that gets more dramatic as the song goes on, a song that is about not being good enough, a common theme with many of Whites songs. This is nice relaxing tune to listen to, despite the dis heartening lyrics. 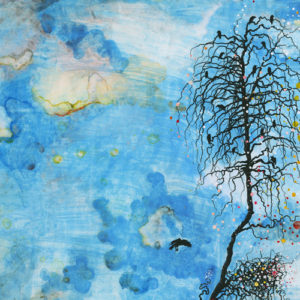 I would say this is an excellent album that appears very dark but is full of raw and honest emotion that is mainly based around love or the loss of love. There are the grittier sounds like ‘What’s so’ and ‘Fight For you’ that express the manly and rockier side to White, then you have the more sentimental and heart felt tunes such as ‘Black Leaf ‘and ‘The Martyr’ which express the softer side. It is clear that John Paul White is an amazing musician with wonderful writing skills, although I do not believe the album is fully country, there are definitely hints, I would class it as more folk music. There are some rather dark tunes on the album but musically and lyrically there are some addicting songs featured on ‘Beulah’.

The Once and Future Queen, I’ve been Over This Before, Hate the Way You Love Me