If you are up for some good old social media drama, chances are you have heard of Ronnie Dunn’s adventures in the past few years. Fame comes and goes but everyone handles it differently. Well, Ronnie is definitely not the quiet one. The first single, Ain’t No Trucks In Texas, failed to get the kind of response Dunn would hope for, therefore the new album, Tattooed Heart remains a mystery – can it be a total flop again? Produced by Rascal Flatts’ Jay DeMarcus and released by Big Machine label, one would hope it isn’t!

Being a member of Brooks and Dunn is not always easy. Despite being one of the most influential country duos, the solo career of Ronnie Dunn has not been going great. His first self-titled record did get a number 1 spot. However, he was soon dropped from Arista Nashville label and his career took a hard hit. The second album, released by Dunn’s own label, did not chart and sent Ronnie pretty far down the popularity ladder. With expectations being higher than ever, Tattooed Heart is one to look out for.

The first single, Ain’t No Trucks In Texas was released way back in 2015, and it only managed to chart at number 42 on the Billboard Country Airplay. Surprisingly low position for a song that is very much a Ronnie song. Accompanied by a loud guitar which gives it a good rock foundation, the song talks about a bitter man in denial after a break up. It is full of clichés and lyrical twists that probably did not seem very original to many, yet they fit to the song.

“If you were a whiskey, girl, I’ll be a damn drunk,” clearly the clichés don’t fully stop after single no. 1, they just hop on the next one. Very similar arrangement to the first single, with a good twist of Kix Brooks appearing in the middle of this tune, Damn Drunk. If you were looking for this reunion, you got it! Very good vocals, however, it can make you wonder why was this particular song chosen as the next single. Is it only because of Brooks’ appearance? With the arrangement being similar to the first single which already did not perform well, wouldn’t it be better to choose a song that has a different ring to it?

Ronnie Dunn has been a bit of a loud mouth, complaining about the industry not supporting old country artist and allowing the genre to take so much influence from pop music. The only way to back up these claims is to release a song that is country through and through. I Worship The Woman You Walked On is exactly that. This song has a very flattering piano background that elevates the lyrics during the chorus. This song but also I Wanna Love Like That Again suit Dunn’s voice incredibly well. You can hear so many emotions in his vocals when a song is slower. A talent that not many have yet Dunn does not always play it to his strengths as these songs haven’t been given much attention recently.

There are numerous tracks that unfortunately speak completely against Dunn’s preaching of support for older traditional country. Songs like Young Buck, Still Feels Like Mexico and I Put That There were clearly soaked in pop music before they were put on the album. A track like I Put That There is an extremely enjoyable listen, however, a man like Ronnie Dunn who is an advocate of ‘old country music’ should not then hypocritically sing it when it’s obviously not his style. The song must be very well fitting to an arena show but it is something that perhaps Dierks Bentley could sing but definitely not Dunn.

And the most hypocritical of all the pop songs on this album is definitely Tattooed Heart – an Ariana Grande cover song. It is not the case at all that Ronnie did a bad job on this song. On the contrary, this version suits his voice very well. However, who wants to have Ariana Grande on their mind when they are listening to Ronnie Dunn? And why would you criticise radios for favouring younger pop country artists and then release Tattooed Heart and even make it the title of the album? That surely contradicts everything you have said.

Only Broken Heart In San Atone and the only good fiddle you hear on the album in She Don’t Honky Tonk No More, are the last two tracks on the album and they close the project very nicely, and thankfully, in Ronnie’s style. Ronnie is a good old dog from the industry that can tell you one or two things about a heartbreak. Both of the songs musically reflect what kind of style Dunn should probably have kept during the entire album, a style that comes off very natural to him. The album definitely finishes on a higher level.

1. Ain’t No Trucks In Texas 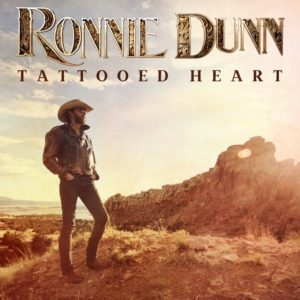 2. Damn Drunk
3. I Worship The Woman You Walked On
4. That’s Why They Make Jack Daniels
5. I Put That There
6. Young Buck
7. I Wanna Love Like That Again
8. Still Feels Like Mexico
9. Tattooed Heart
10. This Old Heart
11. Only Broken Heart In San Atone
12. She Don’t Honky Tonk No More

Tattooed Heart is an album full of highs and lows. It is extremely difficult to write something negative about a true legend like Ronnie. However, it is more difficult to see a man of his calibre to almost play an act he is not. It’s hard to understand why both Dunn and the label would succumb to the pressure of staying ‘current’ and trying to appeal to today’s diversified country genre if that is not who he is. The album itself has a lot of potential and will give you a number of songs that are Ronnie through and through. Even some songs that are out of character for Dunn were produced with a lot of respect to the genre, they just don’t represent the opinions Dunn was vocal about in the past.

I Worship The Woman You Walked On, Only Broken Heart In San Atone, She Don’t Honky Tonk No More