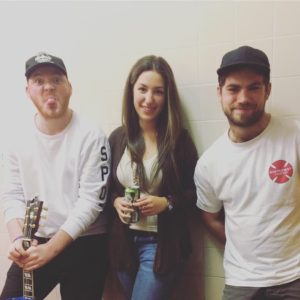 times. It has got plenty of dents but when one of the guys started playing, the sound was brand new.

The guitar belongs to Holloway Road, a country duo made out of Robert Gulston and Jack Cooper. I sat down with them on the night they were the opening act for Robert Ellis in the Islington Academy 2. “We always bring spare guitars. You know, just in case somebody breaks a string,” said Jack as he was walking around the backstage.

Holloway Road were recently awarded Duo of the Year by the British Country Music Association, and have made a few appearances at the Country 2 Country festival in the O2 Arena. They have been making a name for themselves on the UK country scene, especially after releasing their EP, Roots, earlier this year.

“I can’t drink today, we are driving back home straight after the show,” said Robert Gulston as he handed me a can of beer, and it was perhaps a good way to start work for me. It is a given that every one who hands you a beer right after you meet them is a very laid back person and it was clear from the beginning that this interview is going to be fun.

Southend is a very unlikely home to both of the Holloway Road guys as Essex is not a particularly big area on country music.

“As kids we grew up playing loads of different sorts of music – rock music, punk music, dance,” said Jack Cooper. “I was brought up on a lot of Motown stuff and everything really. There was always music playing in the house when I was little.”

In today’s business, being an up and coming musician is harder then ever. CDs are disappearing in front of our eyes and are almost fully replaced by online streaming services. Meeting at school more than 10 years ago, the Holloway Road guys have seen the industry change rapidly.

“it’s tough. The biggest problem that younger artists are going to have is they’re not selling any records, no-one is actually buying it,” said Robert. “There are so many different streaming platforms now and they all compete. It puts into the consumer’s head it’s okay to own someone’s intellectual property for nothing but the person on the other end of the line, that’s working their ass off, gets nothing.”

The trainers and baseball cap wearing duo have tackled the problem of falling sales across the industry by being on the road constantly. Meeting them at the C2C Launch Party, to me, it was refreshing and surprising how much they are moving on stage, despite the fact that they both play guitars.

“The stage presence is very natural, it’s very natural until a point when you think, ‘I need to change chord’. Sometimes that does happen, you kind of get caught up in performing and you forget you’re performing,” laughed Rob, who never puts his guitar down when on stage.

Their last single, Where We Are Tonight, released in September, is soon to be accompanied by some brand new songs. “There are plans to release more, we’re making them at the moment. Well, we’re making the songs not the plans! (laughter) I can’t give you a timeframe. It is going to happen though. It will be early next year, I’m sure,” he continued.

According to Holloway Road, there is a boom in country music in the UK. With the likes of The Cadillac Three and Thomas Rhett finishing their UK tours just as Chris Young and Brad Paisley are getting ready to step on the O2 arena stage in March, country is more present in mainstream music then ever before.

“There’s always that crossover, that pop crossover going on, especially with band like The Shires and Ward Thomas. We put a lot of pop crossovers with the music we grew up listening to, so I think it’s now starting to appeal more to the younger generation and I think that’s where the boom is coming from really,” explained Jack. “More young people playing country makes it appeal to young people that want to listen.”

With only a few minutes left before the Holloway Road are due on stage, the interview might have been over but Rob handed me the spare guitar in a hope to teach me a few chords he promised to do so when we met. Jack was putting together the set list in the meantime, and later joined us for a jam session which may or may not have included some Backstreet Boys. I say it was a jam, I was only watching, and I never thought I’d see a country duo warm up to my Backstreet Boys cover request. Just another day at the office for them, and a very interesting one for me.