Last time we saw them was at the O2’s Brooklyn Bowl during the Country 2 Country festival. They blew the 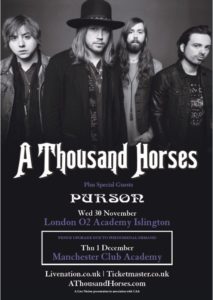 roof off, which still hasn’t been fixed. A similar performance was expected from A Thousand Horses in London, the first of their 3 headlining concerts in the UK.

A Thousand Horses should really be at the top of your ‘cool’ list, their shows are full of southern rock attitude, some outstanding back-up vocalists and tens of guitars on stage to choose from. Their first studio album, Southernality, created a large US fan base for the band, with the first single, Smoke, reaching a number one spot on the US Country Airplay.

The crowd at the O2 Academy Islington kept on growing and growing hours before the guys were due on stage. Leather jackets, plastic beer cups, even some cowboy boots – your regular gear for a country concert. That was, indeed, the case for the band as well, with the first thing that was brought on stage after the opening act was beer.

A Thousand Horses stepped onto the stage in full power, with the frontman, Michael Hobby, immediately taking the microphone from that stand and singing the beginning lines of Blaze of Something to first rows.

The band begin with fan-favourite tracks Travelin’ Man, Heaven is Close and Drunk Dial. A large part of the audience unusually kept their phones in their pockets and sang along to every word, often with a raised hand holding a cup of beer instead of ‘snapchatting’ the concert.

Some fans seemed to have enjoyed the first few songs so much they kept rocking their hair back and forth, something close to what you would expect at a metal concert. “It’s amazing to see your beautiful faces, y’all sure know how to party” said the band’s frontman, yet he probably directed those words exactly to the head bangers.

A Thousand Horses have so far released one studio album but the big setlist of 17 songs was certainly a good indicator that a new album is on the way. The band introduced a number of songs, such as Preaching To The Choir and Bridges, that have not been released yet, however, their more laid back sound seemed to be a good sing along to at least half of the audience, who have most likely been following the band more closely in the last few years.

The show soon turned a lot more intimate during Back To Me and a new song, Just For Tonight, as the band sat down on the edge of the stage to get closer to the crowd. It was the first time for the band to be left alone on the stage. A Thousand Horses have a large production of eight people which, apart from the four main band members, also includes back-up vocalists, a violinist and a drummer. During this acoustic segment, the very distinctive voice of Michael Hobby took over the entire venue, leaving the audience to step back and really listen rather than party. This short acoustic part of the show left you wishing they would have carried on playing like this for a little bit longer as it showed the pure talent of the band and made the rather big stage seem more intimate.

With some of their most famous songs, Southernality, Smoke and First Time, ending the show, A Thousand Horses left the audience on a high with so much of their show being a very energetic and up-beat performance. Their southern rock style of music is infectious which made the show feel like it lasted only a few seconds. Just as the band thanked everybody for a dream come true, they also told the fans to hang around if they like, because they were coming back to meet every single person who wanted to do so. A memorable and humbling gesture. That and the crazy loud show will definitely be welcome back in London as often as A Thousand Horses are happy to come along.