It must have been the coldest night of 2016 so far. Not that the small venue of The Borderline requires anyone 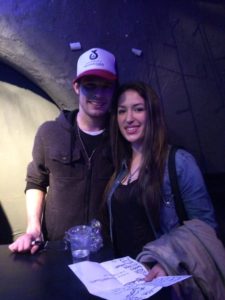 to extensively wait before the doors open, there was a queue waiting for Tucker Beathard.

Supporting Dierks Bentley on his tour last April, Tucker Beathard is becoming a very familiar face to the UK crowd. With his father, Casey, being one of the top songwriters in Nashville, there is arguably a lot of pressure on Tucker’s shoulders to make a name for himself. With the popular EP, Fight Like Hell, released in October, the crowd on that cold night in London had a lot of expectations for Beathard’s first headlining UK concert.

The tiny stage of The Borderline venue must be slightly intimidating. The venue holds about 200 people, yet all the people are within a hand reach from the performer. When Tucker got on stage, he did give the crowd a nervous but sincere smile and started playing one of his older tunes, Better Than Me. That performance lasted about three seconds before he stopped and asked the crowd whether they could even hear anything. We couldn’t.

After a short sound adjustment and a few laughs about the situation from both Tucker and the audience, he began yet again, this time more comfortably. That confidence grew especially during Ride On. This one, which to my disappointment is not on the EP, was one of the highlights of the entire show. The simplicity of just Tucker’s guitar and his very distinctive voice was possibly the most suitable arrangement. That arrangement with Ride On, but also similarly with 20-10 Tennessee, made the performance so powerful it asked the audience to listen and appreciate the art of songwriting.

With Tucker being in his very early 20s, there is a certain amount of sweetness that comes into play whenever he performs. Despite him promising the crowd that he’s always been a wild child, his heart is exactly in the right place whenever he writes. This could have been seen during the performance of I’ll Take On The World With You, a song written about the bond he has with his brothers.

If you missed this show, you did miss seeing a wonderful and raw talent in making. Perhaps next time he comes, it would not be a surprise if he had a full band and playing for a larger crowd. However, for me, it was very special that I could be a part of this intimate gig which felt like I was hanging out with my friends. And you know, we all have that one really talented friend who can sing a song or two. Well, that night, my talented friend was Tucker Beathard. And he did not have to sing cover songs because he has plenty of hits of his own, such as Rock On, to choose from. 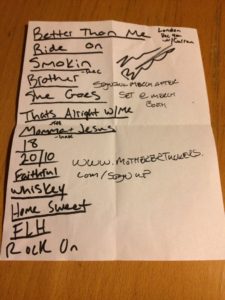