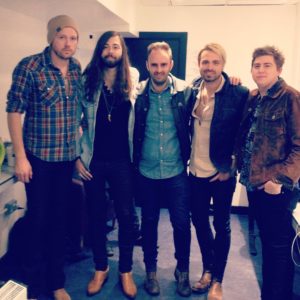 Having rocked C2C earlier this year at the after party A Thousand Horses saw their stock in the UK rise sharply. Their country, rock, blues sound was just what the doctor ordered. Quickly following that the band announced a UK tour for December to tour their album Southernality. We were lucky enough to catch up with the band backstage before their show in Manchester for a chat…

Welcome back to England guys. It’s your second time this year but this’ll be your first show outside of the capital, right?

Bill: We were just in London, yeah.

Michael: We were just in London for C2C so we got the real deal today!

The North of England is where it’s at! I don’t want to say the South is tame but… it is! Are you playing Scotland at all?

Zach: No but I’d love to go to Scotland!

Michael: Everyone else has said that!

How excited are you to be heading out on your first full UK tour?

Michael: Man it’s awesome! It’s a dream come true! We came here for C2C and played for that festival then did a little secret show but to come back and do more than that and get out of London has been killer. To see the response of the fans has been amazing. Last night (in London) was incredible!

How did you find the reaction the first time you came in March?

Bill: We found it great!

Michael: That’s why we’re back.

Is it what you expected? It must be weird for you guys coming over from the States to a completely different culture – at least musically?

Michael: It was more than we expected. We didn’t know that we were gonna fly over here and play a show and shit loads of people were gonna show up!

Zach: We’d never even been here so for us it was a pleasant surprise. We got the bug at that point and we’re already trying to plan our next trip.

Did you ever expect your music to translate over here? I mean, country, I suppose you guys are a bit more rock influenced…

Michael: Yeah a little more rock. We always wanted to and hoped that it would and it seems to be that it is…

Bill: I think so.

Michael: It’s just killer that it did. We made this record and, you know, I think we were thinking we’ll tour the States and they were like “well we are gonna go to Europe and London and play” so we were like “f*ck yeah! I hope they know us over there!”

Do you have many British influences on your music? For me, when I listen to the album, I think First Time sounds so Stonesy!

Bill: I think so. We were talking about when you were a kid and you get your guitar, we all started playing when we were like twelve years old, you start learning Zeppelin and the Rolling Stones and The Who…

Michael: Then Oasis because when we got guitars then were the biggest band in the world in 94/95.

Zach: What’s The Story (Morning Glory) was like the first cassette tape that I ever bought!

Bill: We were five years old in 95! Standing On The Shoulder of Giants came out when I got my first guitar… what year was that? 2000?

Michael: Champagne Supernova was one of the first songs that I learned on guitar.

Bill: We used to play Wonderwall in church!

Well of course you’re in Oasis’ hometown tonight. Are you going to throw a song in the setlist? I saw Darius Rucker do Champagne Supernova here once and Kip Moore did Don’t Look Back in Anger in London…

Zach: We’re definitely going to get some gin and tonic back here!

Michael: Yeah that’s either going to go down really well or…

Bill: We always find it really hard to find a cover to play!

I was going to ask do you all have different influences that you bring to the table?

Bill: I think that’s the beauty of a band when all four of us are bringing something different. We’re not totally off the map which each other but there are differences.

Michael: Yeah there’s a common thread through all of our influences it’s just certain people are stronger with different things and when it all melts together that’s what kind of makes our sound. We all love Tom Petty, we all love Oasis but it doesn’t mean that… I don’t know what I’m trying to say…

It doesn’t mean anything apparently…

Graham: You really went down a dead end there…

So the latest album Southernality is technically your second album but your first with Republic. Does it feel like a debut to you guys?

Bill: Well the first thing we did was kind of an EP so it wasn’t like our first album or statement.

Zach: That was kind of all on our own with a low budget and all that then Southernality was the one.

Michael: That was the big debut for Big Machine.

Did you expect the reaction that you got? I think Rolling Stone put it in the top ten country albums of 2015…

Michael: That was crazy. The reviews and recognition were incredible.

Bill: It was awesome, I mean, we liked it and that’s what you want to do.

Michael: Yeah just make an album that you’re proud of and hope that other people like it too.

Zach: We didn’t know what to think. We were putting this out and thinking ‘are country radio in the US going to accept us into this club basically?’

Well you guys have had a lot of hype for the live show for years. I know Rolling Stone had put you as a band to watch at Austin City Limits…

Michael: Yeah that was cool!

What is it that sets your live show apart from a lot of acts?

Michael: For us live is kind of the most important thing to be good at and we just try to bring a high energy and entertaining show. We have a big band, there’s nine of us on stage, so we carry background singers to try and fill it out and they’re incredible. People spend their hard earned money to come to the show and we want them to really get a full deal and great experience. That’s what we’re all about.

Cool. Going back to the UK tour. How aware are bands in America at the moment of how big the country scene is growing in Europe and the UK in particular?

Michael: Yeah we are starting to hear a lot more. A lot of our friends are coming over here and people are starting to talk about it. Everyone is having great experiences. You see the crowd and the pictures and videos and we’re just really starting to come to a point where if you wanna make that jump then people are just going for it. People like Kip Moore and Blackberry Smoke it’s cool to see them just keep coming back.

Well, for you guys, this show tonight has been moved to a bigger venue due to demand so that’s got to be a good sign?

Well instead of going to a smaller venue!

Michael: Oh… we moved it down!

Graham: Just an acoustic show on the street!

So the album has had some really good reviews and it’s probably a lot harder and rockier than a lot of stuff that’s come out of Nashville recently. Do you think that the country scene is turning a corner now with people like yourselves and Brothers Osborne?

Michael: I think it’s definitely becoming more accepted in giving bands like that a lane to have a career and success. I definitely think the door is opening and a lot of bands before us helped pave that way.

Bill: I think there are a lot of great young artists out there making their own kind of music and the artistry is amazing. With Maren Morris, Brothers Osborne and Thomas Rhett they’re all creating their own sounds, it’s all happening simultaneously and they’re all writing great songs. It’s definitely a great scene going on.

So have you guys got any plans for the follow up to Southernality?

Michael: Yeah we just started recording last week. We cut two songs before coming over here and when we get home we’ll continue to shuffle through that.

So there should be something in 2017?

Zach: We’re going to play a few new ones tonight too.

And do you think you’ll get back over here next year?

Michael: We’re hoping to get back next year that’s the plan. Once we get done with the album we’ll do what we’ve gotta do to come back and try to keep it going.

It’s surprising now seeing all of these bands that are coming over. Even four or five years a go we wouldn’t get people coming here. It’s really cool for us in the UK. I suppose you guys might translate a lot easier than some bands as you do have those British influences.

Zach: Yeah and it’s cool to hear how people listen to music over here; the fact that people notice those types of things and are listening to the album as a whole as a piece of art. I’m not saying that people don’t do that in the US but you can feel that people take listening to music a lot more seriously.

Sometimes it does lead those uncomfortable moments where it goes silent between songs and the band are left thinking “are they just being respectful or is this sh*t?!”

Zach: We just try and drown out silence! Somebody make some feedback!

So the plans for 2017 then is it just record the album and tour?

Michael: Finish the album, get out on the road in the States then plan another trip back here. We’re always on the road so we’ll pretty much stay that way!