After two cancelled UK tours last year an artist I was first introduced to 2013 ACM New Male winner at the very first Country to Country, Brantley Gilbert, returns with his new album, The Devil Don’t Sleep. A small town USA native of Jefferson, Georgia Gilbert may not have released an album since 2014 number one platinum selling record Just As I Am but he has been busy. He toured with Kenny Chesney in 2015 before headlining his own 2016 The Blackout Tour (I know, the less said the better about that!). After splitting from Jana Krammer in 2013 he married Georgia schoolteacher Amber Cochran in 2015 and many songs on this album are related to this main event. In the build up to the release Gilbert said how there is a lot of good in this album and not so much of the bad and the ugly as so many good things have happened in the past three years.

This album is his reminder to himself to keep moving forward and keep his nose in the right direction.
The album opens with a catchy number Rockin’ Chairs, which could well be penned as a future single. There’s a good message in it of making memories and living for today as time moves so quickly and you can look back on them when you are in your rocking chair “these are the days, these are the nights, we let the good times out.”

The early tracks on the album continue in pretty standard Gilbert fashion and fans of his previous albums will straight away be able to pick out The Ones That Like Me, he will be there for you if you are for him and the haters need to get to know the real man and the first single from the record The Weekend, forgetting the 9-5 and letting your hair down and making sure you kick back even harder than you work.

The first song you can notice a change in Gilbert’s material is You Could Be That Girl. Having known Cochran for many years before their marriage this is when you know the girl is the one for you.

Gilbert carries on with the romantic tone for Smokin Gun before Bro Code offers a different approach (enter How I Met Your Mother/ Barney Stinson jokes here) giving advice to a friend whose partner is trying to cheat on said friend.

Traditional Brantley songs return with It’s About to Get Dirty, girls; bonfires; drinking! Before offering a warning song in another potential single, Tried to Tell Ya – he’s trouble, crazy and can’t be changed. Very similar to Just as I am track If You Want A Bad Boy, just a bit politer!!

In My Head, Way Back and Baby Be Crazy are the songs which emphasise the importance of making memories, love being a crazy thing and not forgetting your roots.

Outlaw in Me is one of my favourite tracks on the record as another song to his wife reminding her he can’t be changed and should be loved for the outlaw he is, tattoos and all.

Bullet In A Bonfire and title track The Devil Don’t Sleep are two very contrasting songs. It seems as the before and after track – one where he is ready to drop the gloves and fight and the other advising you that the devil doesn’t sleep so you’d better not let him in.

The album is concluded with two softer ballads. We’re Gonna Ride Again is a raise a glass tribute song to a departed friend (who is burning doughnuts in the clouds) but will never be far away and they will ride again one day. The final track Three Feet of Water is an introduction to the new man Brantley Gilbert has become as the sun is shining now and his darker days are behind him. 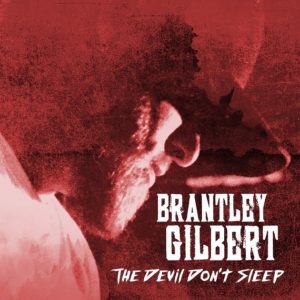 This album is definitely an introduction to the new sober, disciplined Brantley Gilbert with barely a mention of a gun. There’s still tracks to keep original fans happy and a slight move away from Bro Country may well gain him a few new fans, so I would say give this a listen if you’ve previously turned away from his earlier albums; he’s a changed man and so is his music. The album also comes as a Deluxe Edition with 26 tracks, featuring some previous live album live tracks. Having announced a 2017 North American tour there is hints yet to continuing his cancelled European Tour.

Rockin’ Chair, The Weekend, Outlaw in Me