I became a fan of Lauren Alaina when watching her on the 10th season of American Idol where she was the runner up to fellow country star Scotty McCreery. I absolutely loved seeing country music dominating the show and with Lauren I found her to be extremely relatable, not to mention an amazing singer. She released her first album shortly after in 2011. Fans of Alaina waited 5 years for new music from the star and finally in 2016 she released her self titled EP which was just a little taster to show just how much she had grown over those years. I for one was super excited to hear the full album titled ‘Road Less Travelled’ which was released in January of this year and I can assure you that it did not disappoint.

Starting off the long-awaited album is `Doin Fine` which to me is the perfect opening to set the tone for the album. The bouncy, yet country beginning of the song catches your attention immediately, shortly followed by Alaina’s powerhouse voice. Although the subject of the song is based around a parent’s breakup, the lyrics remain uplifting and give you that boost needed if you’re having a bad day. This song reminds us that although bad things can happen, you should power through and keep going.

Next up is ‘My Kind of People’, in this feel-good tune Alaina sings about the people she wants to surround herself with. As long as people can be themselves and let their true colours show, she is happy to be around them. The theme of this song and the music itself reminds me a lot of ‘Company You Keep’ by Maren Morris, which also highlights the same qualities she wants in friends around her.

‘Three’ follows which is the first ballad on the album. The subject of this seems to be a common theme with country stars, Alaina sings about everything she misses out on in her personal life in order to peruse her musical career. She continues to explain the reasons why she has chosen this journey which makes this a pretty emotional tune. Not to mention her incredible vocals throughout which only get better as the song goes on.

Following is Alaina’s smash hit ‘Road Less Travelled’. As this tune was released in 2016 on her EP and as a single, I already knew every word to this, as I am sure many other girls and guys do too. This is an anthem for anyone who wants to succeed by being true to themselves. We get a little insight into some of the things Alaina has been through since finishing on American Idol. It was clear that being in the spotlight at the age of 16 would bring negative and mean comments from the public and it seems that Lauren has used all of the negativity and created some amazing songs to share with the world and turn it all into positivity for others. The pop and country cross over on this record is shown through the catchy tune and relatable lyrics, it is an uplifting song for anyone to enjoy.

Next up is the funky ‘Queen of Hearts’, the fun play on words is just one of the great things about this track. Alaina is singing about being there and ready for a relationship but it seems the guy is playing games rather than noticing what is right there in front of him. The sassy tone throughout is perfect for the subject of the tune, it shows a different and fun side to Alaina which if anyone has followed her for a while, you would know that Lauren has an extremely bubbly and quirky personality.

Now we have ‘Think Outside the Boy’ where Alaina reminds young girls not to get caught up by high school crushes and to always follow their dreams first. It is apparent throughout that Lauren is a girl’s girl which makes this album that much more relatable for her fans. This is another tune to remind the younger generation to be all that they can.

‘Painting Pillows’ is a slow ballad that was also featured on the EP previously this is another play on words where Alaina sings about heartbreak by describing the makeup running down onto her pillow and likening it to art, which is where, I imagine, the title comes from. Alaina reminds us once again that she too deals with heartbreak and it is not always easy to be 100% positive. Her vocals absolutely dominate this tune reminding us just how great she is.

Getting back to her sassy side, ‘Next Boyfriend’ follows where we hear the star singing about recognising a boy from somewhere, which we soon come to realise that she is describing someone that she hopes to soon become her next boyfriend. This is another fun tune which was released as her first single on the EP. Alaina also released a music video to accompany this tune which featured her real-life boyfriend Alex Hopkins, which I believe added that extra personal touch.

Keeping with the upbeat and fun theme we have ‘Crashin’ the Boys’ Club’ where we hear Lauren sing about needing to forget about gossiping, shopping and all those girly things in favour of joining the guys for beer and football just to get away from all the drama for one night. I’m sure many girls get the same feeling sometimes where they just want to let loose and not have to deal with whining and crying of a girls night. This is one to sing along with if you want to have a good time.

Following is ‘Same Day Different Bottle’, which upon hearing seems to be one of, if not, the most personal song that appears on the album. It has been said that her father was an alcoholic and the theme of this is about Alaina watching him struggle with the addiction and how hard it was for her to see and not be able to help. Although he is now sober, from what I have heard, we get a very honest and emotional insight on what she has been through with her family. This is easily one of the most heart wrenching tracks on the album.

Next up is the more upbeat tune ‘Holding The Other’, which brings us back to a more positive place. The opening beat grabs your attention straight away before Lauren begins to sing about how she able to fight any wars or issues with one hand, as long as that special someone is holding the other. This is a great song for your partner and Lauren is clear about how much trust and appreciation she has in this tune. It’s a very catchy tune that I am sure you will have playing repeatedly in your mind, hours after listening.

Finishing off this album is another very personal song called ‘Pretty’. Alaina recently revealed that she struggled with an eating disorder throughout her teen years and I believe this song tells the heart-breaking time she went through as she sings about never feeling good enough, or pretty enough. Although the story behind it is extremely raw and emotional, Alaina goes on to sing that it does not matter about what is on the outside, it is the inside that counts as ‘Pretty is what pretty does’. This will be one of those songs that will help hundreds of people throughout if they have ever been in the same position. Although the message is extremely important, Alaina’s vocals are incredible and the fact that they replicate a marching sound as she sings about picking yourself up and continuing to keep marching on make this record one of the best. 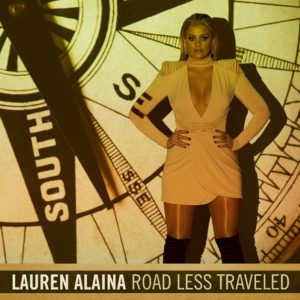 This album is one I have been eagerly awaiting for years now and I am so pleased that it is everything I thought it would be. You get a great variety of fun and an insight into Lauren’s bubbly personality with songs like ‘Crashin’ the Boys Club’ and ‘Next Boyfriend’, but you also see the very honest and raw tunes like ‘Three’ and ‘Pretty’ to really draw in all kinds of fans. It is clear that she has grown up over the past few years and the fact that she was able to write on the songs for this album make is so much more relatable and personal for her fans, old and new. This is an album to motivate and encourage people to never give up and always be who they want to be without worrying about anyone else, which is a perfect message to send out to the new generation of fans. I think this is just the start for Miss Alaina and the success she has already received for it is only the beginning of what is to come for the star. I highly recommend ‘Road Less Travelled’ to any music fan, whether they like country or not.