Aaron Watson is no new kid on the block in country music. The Texan has released more albums than you could count on both of your hands and has a large and devoted fan base. It wasn’t, however, until his most recent album in 2015’s The Underdog that Watson suddenly found himself in the public eye in a big way. Not only did The Underdog hit the number one spot on the Billboard Country Chart but it also made Watson the first ever independent artist to do so. Nashville’s big wigs were quaking in their boots! Watson returns this month with possibly the most difficult album of his career in the follow up to The Underdog – Vaquero.

The album kicks off with Texas Lullaby which is an ode to Watson’s home state. Watson is a proud Texan and it’s always a theme that plays an important role in his music. The song is a dreamy and folky number that has your foot tapping from the get-go. It’s a fitting way for Watson to start his first record since he reached great heights with The Underdog as it shows that he will never forget where he came from.

Watson picks up the pace for the second track on the album Take You Home Tonight. With it’s upbeat acoustic guitar intro and dancing fiddle lines this track starts as it means to go on. The huge chorus is about as feel-good as it gets. I absolutely love Watson’s smooth vocals that seem to just glide through the verses and lift the whole song up on the chorus. If you’re ever feeling a little low then I’d suggest putting this song on for a shot of happiness in your life. It’s also got a fantastic fiddle/guitar solo section followed by a handclapped chorus which will just get any crowd going. Awesome.

These Old Boots Have Roots is up next and carries on the vibe from Take You Home Tonight. Again, Watson’s vocals are absolutely spot on and the track is musically superb. Already on this album you can feel how finely crafted these songs are and how they’re made by a band that have been playing together for a long time. The chorus of “So I’ll march to the beat of my heart pounding like a drum” is a big fist pumper. Any one who has seen Watson live will know how good his fiddle player Damien Green is and the solo on this song just goes to prove that.

Next up is Be My Girl which slows things down slightly. This country love song is drenched in romance and, knowing Watson, is most likely dedicated to his wife. In a recent interview about the album Watson spoke about how a lot of modern country is just “boys singing about sex” so this counts as his response from a “man who sings about loving his wife”.

They Don’t Make Em Like They Used To is an ode to the way things used to be and simpler times. It’s a song that looks at both the old days (‘granny’s in the kitchen, smell of fried chicken frying) and also the people that we had back then (they don’t make em like they used to, they don’t make them like you any more). It’s a slightly politically charged song coming from what must be a tired and worried America but also casts a fond eye on the people who aren’t here any more but left a legacy thanks to the wonderful things they did.

The title track Vaquero kicks off with a mariachi Mexican intro. It’s obvious that there are a lot of influences from south of the border (or soon to be ‘south of the wall’) that come from living in Texas. The song is about sitting down with an old Vaquero, or Mexican cowboy, and listening to his wisdom. It’s another song about looking back and learning from those who came before us.

Next up is the lead single from the album – the rocking and rollicking Outta Style. This is a song that could, if Watson wanted, smash up mainstream radio. It’s every inch the modern country rock song coming straight out of Texas. Listening to this song you just can’t help but want to dance – ironically my girlfriend and I did a quick two-step to it in our Manchester hotel room right before going to interview Watson. It’s a song that Watson openly dedicates to his wife and is lyrically about how their love will never disappear. It’s a brilliant tune with its driving electric guitars and dancing fiddle lines with the big sing-a-long chorus. Great stuff.

After Outta Style we are hit with the twanging guitar riff of Wild Horses Run. This is a brooding and sexy song which is another adoring look at his woman. The chorus is catchy with a great hook – at this point it’s really clear that Watson can right a country song just as catchy, if not more, than a lot of things coming from Nashville.

Mariano’s Dream acts as a brief musical interlude before we head into Clear Isabel which is one of my favourite songs on the album. It’s a song about a father who is desperately trying to get his daughter over the Mexican border into Texas. It couldn’t have come at a more fitting time with The Donald and his talk of building a wall. It’s fantastic to hear such a song from a Texan and hear what his thoughts on these matters are. Watson recently said in an interview that if he were a Mexican he would do all he could to get his child into Texas and out of the dangerous border towns. Watson sings “South Texas looks like heaven when you’re down here in this living Hell” over a pulsating and almost rushed and panicked tempo. It’s a really superbly well-rounded song with a brilliant story in the lyrics and fantastic musicianship. This could be one of the songs of the year!

We slow things down a little next for the beautiful Big Love In A Small Town. This is a song that could be many a persons wedding song for the next hundred years. Watson croons in his smooth vocals about looking back fondly at the town you came from and the memories that you’ve shared there. “I’m still here and you’re still here beside me running around” tells of the love being shared in the same small town but my favourite line without a doubt comes from the chorus where Watson sings “we’ll keep on going strong, tune out the world when it goes wrong, don’t know that everybody dreams about what we’ve found, a big love in a small town” reminds you of the strength that you can feel together when you find the right person.

One Two Step At A Time takes things into an undeniably country place. It’s so country that you’re almost transported into a dusty Texas dancehall with the band playing to old couples in their Stetsons. It’s the type of country that we don’t see much of any more but will always have a place in every country fans heart.

The next song is another of my favourites on the album in Amen Amigo. This song is as big as the Texas sky and can’t help but bring a smile to your face. Lyrically it’s another song about the joys of sharing a border with Mexico and heading over the border on a weekend for a good time. The chorus loudly proclaims “Can I get an Amen Amigo? Hey why don’t we go, check out the world somewhere South of the Rio.” This song is going to be an absolute belter live and have every crowd singing along with it’s chorus. I hate to keep comparing with mainstream Nashville country but this tune is something that I’d love to hear on mainstream radio and there can be no doubt that, should the suits allow it (which they won’t!) it would light up the stadium during CMA Fest!

Another wonderfully written song comes next in The Arrow. This is a song with a lot of personal meaning for me as the arrow is an emblem that I’ve taken on as my own following years of trouble with mental health – I often write about it but it’s one that feels like it could have been written at a particular time just for me. The song finds Watson in a reflective mood, possibly inspired by the fact that he is such a wonderful family man, as he sings “so promise me, before you go, follow your arrow, you will pray to never stray from straight and narrow, be steadfast and steady, always be ready, aim for the stars in the sky, pull it back and let it fly”. It’s a fantastic message for anyone especially the line “let it fly with kindness and love” for when the world is giving you a hard time and feels full of hate and anger.

Rolling Stone could be an almost autobiographical song for Watsons as he sings about his marriage “You’re my rock and I’m your rolling stone”. It’s a last upbeat and rocking number before we close the album out.
The song chosen to close out the album is a truly beautiful song written by a father about his daughter.

Diamonds & Daughters sums up what a fantastic and doting father Watson truly is. Every line of this song feels like it’s written with tears in his eyes and love pouring out of his heart. It’s the type of personal song that makes Watson the great songwriter that he is and the reason that he can get a number one album as an independent artist. The outro to the song is very fitting too. When we interviewed Watson last month he spoke about how he has spent most of the last couple of years listening to The Beatles ‘White Album’ and this song ends with the most Beatles sounding section. 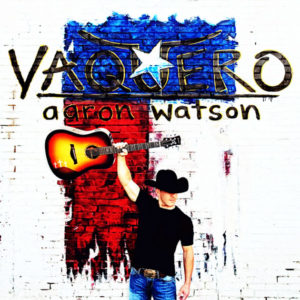 For Aaron Watson following up The Underdog was always going to be a tough task. It was almost an impossible task to try and better the album that made him the first ever-independent artist to get a number one album in the Billboard country chart – well Watson took that challenge and smashed it out of the park! Vaquero is an album that has a little bit of everything to it and every single song works. There isn’t a track on here that I’d choose to skip. It’s got catchy songs, personal and deep songs, culturally relevant songs and more. The great thing about Aaron Watson is that he genuinely doesn’t care where this record lands in the charts; he just wants to make music that his fans love and enjoy. Well with this record he has done exactly that. His fans will love absolutely every one of the sixteen tracks on here but on top of that it’d be a travesty if it didn’t get to number one. Even if it doesn’t, as Watson himself says, who cares? We’ve got a fantastic album to enjoy here and it’ll stand the test of time!

Buy your copy of the album here BUY VAQUERO NOW!

Check out our recent interview with Aaron Watson here