Alison Krauss is a very well established musician, having entered the world of music at a very young age. It is said she started recording for the first time at the age of 14. The country star has gone on to release many, many albums, mostly with her band Alison Krauss and Union Station, as well as win over 20 Grammy awards. As I was not 100% familiar with Alison Krauss’ music, after only listening to a few of her records in the past, I was excited to get stuck into her new album. Even more so when I read that it was her first solo album release of some new content in over 18 years, however the album is made up of 10 cover tracks that were selected by the artist and producer Buddy Cannon. I would imagine that it could be quite daunting to release material for the first time in over a decade, therefore choosing to cover classic songs rather than releasing completely new tunes was probably a smart idea, no matter how well-known Krauss already is. With slight knowledge of her previous work, I took a listen and here are some of my thoughts.

Starting off the album is ‘Losing You’ originally sung by Brenda Lee, instantly I got an old-school country sound which you often don’t hear too much in the new generation of country music. Although I recognised the song, I only now really heard the very melancholy and sad vibe which is perfect for the lyrics that accompany the tune about losing someone. It automatically became clear to me that Krauss has great experience in music which complimented this song massively. If this record was anything to go by, I could tell that the songs chosen for the album would all stick to the similar theme of love or lost love.

Next I was surprised with the upbeat sound of ‘It’s Goodbye and So Long to you’. You can really hear her blue grass roots come out in this song and it is clear why she may have chosen it to feature on this album. Although it is about losing love, it is much more sassy and fun, with the tune making it hard not to dance along to. It seemed like a much more jazzier version than the original which I imagine was done to bring it a little more up to date, in order to appeal to a slightly younger crowd as well as older fans.

Following is the title track ‘Windy City’, I had heard this record before and it was nice to be familiar with a classic tune. Krauss’ mellow, yet meaningful take on the track made it stand out for me. The lyrics are about the city taking away her baby for the bright lights and opportunities, which in turn leaves her lonely. Many artists write about how difficult it can be to pursue a music career and miss out on personal things, so I imagine this is one that Krauss could relate to after so many years in the industry.

‘I Never Cared For You’ is next which is originally by the great Willie Nelson. The opening music and sound sets a very dark and sad mood, with lyrics to accompany it, however the music picks up soon after, even though the lyrics remain dark, yet honest. It sounds as though Alison has added a more current country sound to the song to make it slightly more commercial, which I know needs to be done as time moves on but for me there is a haunting sound to the original that simply cannot be beat.

Sticking with the gloomy and emotional theme, ‘River in the Rain’ follows, which is an emotional ballad. This song highlights Krauss’ angelic like voice and although it was not one of my favourites, I can see why she would choose it for the album as it suited her voice perfectly.

Next up is ‘Dream of Me’ which is another song that highlights the time you lose with loved ones, when on the road performing. This song gives a little hope with the situation though and the slightly more upbeat tune is nice to hear within an album dominated by the more lonely and sad songs. It was also partly written by Buddy Cannon who had a hand in creating this album with Alison Krauss.

Next up is ‘Gentle on My Mind’, which is a sweet song about remembering or thinking about someone always in the back of your mind. This is another tune that is slightly more upbeat, even if the lyrics are not all that happy. Alison has stuck to the original sound almost completely with this song that is originally by Glen Campbell which I love. It is already a great song and Alison certainly does it justice.

Taking us back to a more emotional state ‘All Alone Am I’ follows which is sung perfectly by Krauss. This is one of those songs that show Alison Krauss in her element with the sad and lonely lyrics, with gentle music which highlight her speciality which tends to be the more emotional songs. The couple of Brenda Lee songs that Krauss covers on the album are definitely some of the stand out tracks for me.

Following is ‘Poison Love’ which is another slightly faster tune, with the lyrics remaining a little angry and hurt as she sings about a love that was not good. Alison’s effortless and easy going sound is perfect for this track as it seems like the words of a letter brought to life in a song, which is essentially what a lot of music, specifically country music is.

Rounding off the album is the classic ‘You Don’t Know Me’, originally by Eddy Arnold. A song about loving someone but being too afraid to say anything, which I’m sure would be very relatable for many generations. The opening music is an elegant sound you would have heard back in the day and relates back to the original version, so it does not lose the classic sound. 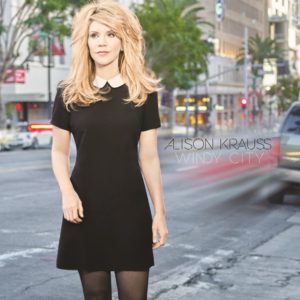 I was pleasantly surprised with this album, although it was not necessarily to my taste as it is something you need to be in the mood for, it reminded me of older generations with beautiful, gentle music that focused mainly on the singing. Alison Krauss has an old and possibly lonely soul as her main chosen theme was love or lost love, which didn’t bother me at all because it is obvious that that is where Alison is at her best. Her angelic tones did all the classic tunes absolute justice and if you ever want some time alone, with a glass of whiskey or wine to relax, this is an album to put on. Although Alison may have been away for a while, she has come back at her best with a great album and it was nice to get a female take on many songs that were originally recorded by men. I loved the ease and relaxed tones in her voice throughout and it’s clear that Alison Krauss is completely at home singing country/bluegrass music, ‘Windy City’ is definitely worth a listen.

Losing you, Gentle on my mind, You don’t know me