Zack Dyer is a Minnesota native who took the leap to Nashville in 2015 to pursue a full time career in music. The songwriter has been lucky enough to be the first act to release an EP as part of Silverado Records ‘Signature Songwriter Series’. This four track record is a great way to become acquainted with Zack and exactly what he’s all about.

Just a little background on Silverado Records – this is a label that set up in 2016 to give a voice to both new and established songwriters in Nashville. It’s a great thing to see these labels popping up with the specific goal of providing a home for artist’s to have a voice. Silverado pride themselves on being ‘a place where our artists can shine and music wins the day’.

The EP kicks off with the upbeat ‘All American’. Immediately you’re hit with Dyer’s soulful and melodic voice over the verse before the song breaks into a big, catchy chorus. It’s really a song that does exactly what it says on the tin – it’s all American! The lyrics are all about a girl and it has that pop infused upbeat feel to it that is so popular at the moment.

Next up is ‘Heartland’ which kicks off with a thudding bass drum. It’s another ode to America – kicking off with the line “there would have never been a Huck Finn and his friend Tom without the land where I come from”. It’s a really soulful song that shows off Dyer’s vocals well. These first two songs really are great and clearly well written if a little tough to relate to from anyone not from the States. I have to admit Dyer seems to know all about a catchy chorus.

‘POS’ comes next and starts us off with some overdriven guitar. It’s another big song that gives a fond look back at an old car and the fun that they had in it. Similar to the first two songs it’s all about that big chorus again.

This ‘Signature Songwriter Series 1’ EP is rounded off with ‘Wishful Drinkin’’. It’s a welcome slow and wistful number after three relatively big and rollicking songs coming before it. The line “The whiskey’s got me thinking but who am I kidding I’m wishful drinking” is a real favourite of mine. Again, it’s a well-written song that offers an emotional side to Dyer. 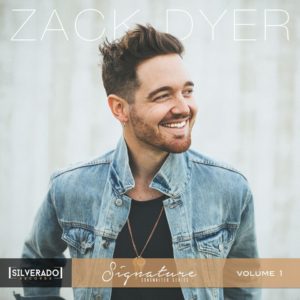 Zack Dyer is the first artist that Silverado Records have introduced to the world and he was a good choice. His sound is not far away from the current Nashville sound that is ruling country radio. Do I think he’s got enough to set him apart from the crowd? In short – yes. I always have time for songwriters and, from these four songs, Dyer is clearly very good at his craft. Sure, there’s a lot of very patriotic American material in here but that doesn’t mean it’s not good stuff. It’d be nice to see what more he has to offer in the future.