Marty Stuart is a performer who has certainly been there and seen it all. He played in Jonny Cash’s band and he was once the director of the Country Music Foundation amongst many other things – not to mention having albums going into the double figures. This year he heads over to England to play at the C2C festival in conjunction with the release of his latest record ‘Way Out West’.

The album kicks off with the instrumental ‘Desert Prayer (Part 1)’ which is an atmospheric and somewhat trippy start to the record. I do enjoy a good intro on an album and this leads nicely into another instrumental in ‘Mojave’. This song is full of the reverb soaked guitars of the old westerns and sends you straight into feeling like you’ve just walked into an old John Wayne picture.

‘Lost on the Desert’ is the first track where we hear Marty’s voice and, despite years on the road, it comes across as strong as ever. This number is classic western country with Marty’s baritone Jonny Cash-esque vocals over a two-step shuffle.

Next up is the title track ‘Way out West’. This is another song that has an extended intro and sounds almost like it’s cut live in the studio with the band just jamming over an intro. It’s a classic storytelling song with Stuart’s vocals almost spoken over the psychedelic country music. It’s a very atmospheric song that is in part created by the jangling guitars and plodding bass.

The fifth track on the album is ‘El Fantasma del Toro’ which starts with a real Latin vibe on the acoustic guitar (pretty obvious from the title really!). Again, the pedal steel weaves around this song creating a mysterious and trippy sound. By this point in the album you really do feel like you’re in the middle of a movie with the Vaquero’s appearing in town. It’s another completely instrumental song that allows Stuart’s band ‘The Fabulous Superlatives’ to really show off.

‘Old Mexico’ is up next. It’s a simple old country song about making a break for freedom in Mexico. This type of country is the old story telling stuff that takes you back to the days of Waylon and Hank in it’s simplicity.

The next track is the first one that really rocks along. ‘Time Don’t Wait’ sounds almost Beatles-like in it’s chord progression and with the wah pedal being used to full effect on the guitars. It’s got a big chorus that’ll surely make it a live favourite.

‘Quicksand’ continues the bigger sound that came in ‘Time Don’t Wait’. It’s another instrumental song with a plodding bass line and screaming guitars.

We are treated to some awesome chicken pickin’ on ‘Air Mail Special’. It’s a brilliant and frantic two minute country song that get’s your foot tapping and would have any crowd doing the dosey doe!

‘Torpedo’ is another opportunity for Marty and his band to show us exactly what they can do. There’s more great guitar playing in that kind of Bakersfield country style. Great stuff.
Marty switches into love song mode for ‘Please Don’t Say Goodbye’, which is a song that almost sounds like a 60’s Shadows song. Again, there is a strong use of the reverb on the guitar that really makes this sound.

‘Whole Lotta Highway (With A Million Miles To Go)’ is another old school country song about a truck driver driving through the night hoping to make it to a barstool. It’s a song that continues to really root this record in the South-West of America where the desert’s spread for miles.

‘Desert Prayer (Part 2)’ is an all acapella vocal song that lasts just under a minute but continues to keep that atmosphere in the album.

The penultimate song on the album is ‘Wait for the Morning’. It’s a fitting end to the record as it focuses on leaving and heading home. It’s quite a simple and laid back song that focuses mostly on the vocal harmonies of the band.

The last track is ‘Way Out West (Reprise)’ which almost acts like the end credits of the album in wrapping everything up with more of that Wild West sound. It’s the perfect way to round off this kind of record. 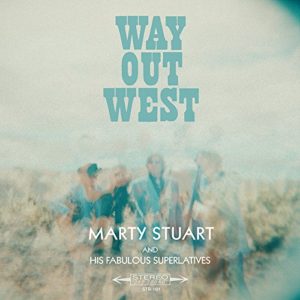 It’s not easy for an artist that has been around as long as Marty Stuart to keep producing records which grab attention. We’ve reviewed albums from a few acts like this over the years and it’s very rare that they hit the spot. This record from Marty Stuart stands out from the crowd in its originality as a concept album. Stuart spent a lot of time in the desert to gather inspiration for the record and it shows here. The instrumental tracks transport you to a place as the name of the album suggests ‘way out west’ as they capture the pure atmosphere of the place. The musicianship on the album really is brilliant and is where it really excels. If you’re looking for a record full of hooks and catchy pop-country then this isn’t the place to look but if you’re a fan of the old school country sound this is well worth checking out. Marty Stuart has definitely shown after all these years that he’s still got it.

The album is available to buy on iTunes here