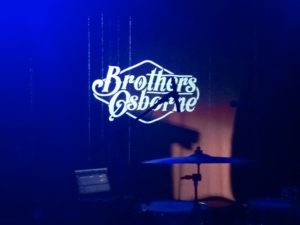 There is little doubt about it when Brothers Osborne announced that they were heading to the UK this year I was a little bit giddy. Since the release of their debut album ‘Pawn Shop’ last year it’s been on repeat on my iPod and an opportunity to catch them live wasn’t to be missed. Their first show on English soil came at C2C on Sunday evening and by all accounts they rocked it. I didn’t head to the festival this year as I simply didn’t have a spare grand lying around for tickets, trains and hotels however a quick hop down to London (even managing to drag my resiliently Northern girlfriend into our capital city) was well worth it.

Dingwalls is a decent little venue tucked amongst the canals of Camden Lock. It’s not the biggest in the world which is great to see a band who are currently touring large theatres in the States.

The Bros came on stage to rapturous applause and launched into the title track from their album ‘Pawn Shop’. TJ greeted the crowd with “good evening mother fuckers!” and we knew that he was pumped. Pawn Shop was soon followed up by one of my favourites from the album in Greener Pastures. The band were supported by a screen behind them that projected videos accompanying each song – it’s not something that you’d often see in such a small venue but definitely added to the effect.

The crowd favourites Rum and 21 Summer followed up and had everyone singing along. It seemed that even the band were surprised at how much the crowd were loving it. TJ even commented that this was the best crowd that they’ve ever played to – we seem to always do it right in the UK! 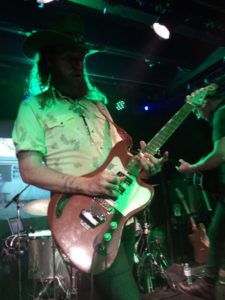 Next up they did one of the songs that’ll be on the soon to be released Deluxe edition of their album in Shoot From The Hip followed by a cover of the Willie Nelson tune Whiskey River where John was really able to show off his guitar skills in their full force. He really is a superb country and blues guitarist which is only further supported when seeing him live. This show of guitar chops perfectly led in to the next song, another from the Deluxe Edition of Pawn Shop, Let Me Love The Lonely Out Of You.

The next section of the show was something that TJ admitted they’d never done before. He talked about how he nearly left Nashville but a week before he went managed to get a gig playing double bass for a bluegrass artist (with John on guitar). They came over to Europe but didn’t hit the UK so wanted to do some bluegrass for us. This led to them all playing around one mic and covers of Johnny Cash’s Folsom Prison Blues and John Denver’s Country Roads. This was a great part of the evening and really got the crowd stomping their feet. 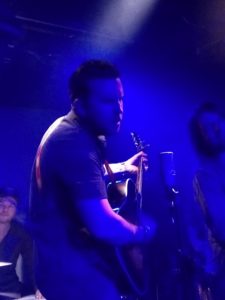 The set was closed out with the always awesome Stay A Little Longer, which was their first number one single in the States and features an awesome solo from John, then It Ain’t My Fault where TJ showed that he’s no slouch on the electric guitar either.

After the obligatory five minutes and clapping, whistling and foot stomping the band came back on. TJ asked what people wanted to hear and someone called for American Crazy. TJ struggled to believe that a crowd in England would want that song but they blasted through it any way and got a huge ovation.

Next was the best moment of the night. As the band wrapped up American Crazy TJ was passed a note by the bands manager announcing that they’d just won the ACM award for best duo! The shock and happiness on the guys faces was amazing and you could genuinely feel that they didn’t know what to do with themselves. TJ commented “we’re definitely not going anywhere now!”

The band proceeded to blast through versions of Heart Shaped Locket and Down Home which had the place shaking before asking the crowd what they wanted again and meeting their demands with their cover of Dixie Chicks ‘Goodbye Earl’. This is so so rare to see bands ask for suggestions and actually play them but these guys seemed to love the interaction with the crowd. John just seemed to be ecstatic to be there and TJ was oozing with charisma. 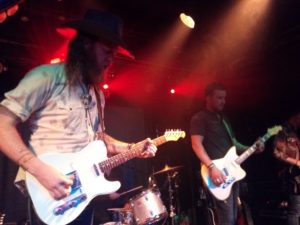 The set was finished with Loving Me Back where John’s wife and the UK’s own Lucie Silvas came on to fill in for Lee Ann Womack’s vocal. Even in this little cameo she showed how great her voice is!

All in all this was an absolutely superb show and finally gave us all a taste of what an awesome live band Brothers Osborne are. They didn’t seem to get as much social media coverage as some at C2C, perhaps because they have a harder and rockier edge, but they are certainly one of the best live bands out there in the country scene right now. 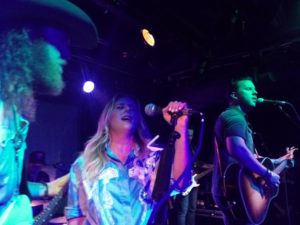 We can’t wait to have them back on these shores soon and, judging from the reaction they got, they’ll be planning a trip ASAP.

Photos courtesy of our own Ian Varley.