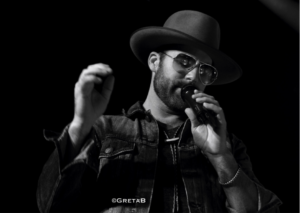 Branded as the ‘Impact Artist of the Weekend’, Drake White got everybody talking, dancing and singing along at Country To Country. From his effortless performance at the CMA Songwriters’ Series, all the way to singing with Zac Brown Band. I sat down with the man before his After Show gig on Saturday and talked about the influence of his grandfather, Grammy’s, cool hats and ‘booty shaking’ music.

Q: I’ve got to ask about the Songwriters’ Series last Thursday that kicked off Country To Country. I am gutted I missed it but you were the talk of the evening. How do you enjoy these kind of events?

Drake: They’re the best because intimacy is something that lacks in the world today. Being quiet is not something you witness a lot in the States, so to be up there with those people was very humbling. I consider Mac McAnally as one of my heroes, he’s just a great soul and great dude, and to be up there with Maren (Morris) and those songwriters, and to see the crowd singing the words back is emotional, it’s amazing.

Q: I’d like to go back to your album because I loved it and I’m not just saying so. It really is one of my favourite records. The genre was a little bit of everything. Was it always your intention to make your first album that different?

Drake: Well, I think it is about influences, you go and you live your life. My dad was a huge music fan. I love soul music. I grew up in a church singing gospel music, listening to gospel music. My sister was three years older than me so we’d listen to rap, and pop, and hip hop, and you know, all this music that my dad would call ‘booty shaking music’. I wanted more, I was always looking. As far as making the record, music is so easily accessible now. It’s that (finger click) easy to listen to anything. It’s only natural that my album would come out like that – little bit of bluegrass, little bit of soul, little bit of pop, little bit of rock and roll.

Q: Your music is all about storytelling. It is such an important feature of yours. You never have three lines repeating for three minutes. Is that kind of writing something you always want to go for?

Drake: The storyline of the song is everything to me. The ideas come from stories either that I’ve heard, lived through or experienced. I think there’s a stream of consciousness that goes with that. You try to live in it, be in it and write in it. I try to write real, write how I see it and how I feel it. I try to write pictures sometimes. But, storytelling is the reason I think country music is becoming so loved over here. It’s not about country, it’s not about rock, it’s not about soul or pop or anything. I’m so glad and humbled to be a part of country music. I’m from Alabama, I’m going to be called country. You just commented on my accent, like I’m a country guy. But, I also have all these different influences.

Q: In the US, there are so many young people who are really into country music, the ones that go to all of those summer festivals. Here in the UK, the demographics is very different. Does that change your show in any way?

Drake: It does change by approach a little bit because you’ve got to know who you’re playing to. It’s about making memories, about making those moments inside that show that make people go ‘holy sh*t, I can relate to that and I can carry that with me.’ That’s what life is about and that’s what we’re trying to create. We’re trying to get people out of their grind. Maybe they have a sick relative, or maybe they’re upside down in their bank account, maybe they just had a car wreck. We want people to forget all that, let’s go out, and go off the deep end with each other for an hour and a half.

Q: How was the entire Grammy’s experience? Tell me everything!

Drake: I love clothes! My mum used to tell me that the better you look, the better you feel. If you feel like you look good, you’re going to look good, you’re going to feel good. I love the Bruno Mars’ stuff, the Beyoncé stuff was really weird, it was out there but I loved it. You could feel there is a comradery there. To be just a part of that community is a dream come true, it’s another humbling thing that I have no idea why God chose me to be in this position so I’ll never take it for granted. I’ve worked so hard to get here, everybody does… the Grammy’s were crazy.

Q: You mentioned the entire style. Do you try to make your style represent your music? Or do you just put on a hat because you look cool?

Drake: Yeah, well, I’ve always been obsessed with hats. I love the kind of depth of things, of making music or hat making, or making rocking chairs or swings. I like going a little bit deeper and finding the craftsmen that did it. Hats were one of those things that were in the 40s – I also obsess about history. My grandfather wore a hat and he was a mountain of a man in my eyes, he was a beautiful soul. He was a preacher and just a good dude, great story teller. So I always thought he was cool, he was the coolest guy in my eyes. So I stole one of his hats one day, put it on and played with it on stage and it became my thing. Do I think about it? Not as much as maybe you would think I do. It’s really just blue jeans, cool shirt, couple of bracelets, a hat and some shades and that’s it.

Q: How well do you know the UK music scene? Is there anybody that you like or is there someone you want to see in concert maybe? Wait, do you go to concerts? Is that something you like to do?

Drake: Yes! I will seek a theatre show, I will seek out a concert, I love going out here and watching the street musicians. So yes I do. I heard of The Shires a while ago, and then I’ve heard of Ed Sheeran 10 years ago. Not 10 years ago but way back before Ed Sheeran. So I’m always digging and searching. I grew up with Pink Floyd, Van Morrison, and of course The Stones. With streaming music and the internet, it’s easier to do now, you can literally type in ‘European folk music’, or ‘United Kingdom folk music’, or ‘London folk music’ and it’ll pop up with a number of people. So that’s the beauty of the technological world that we live in today. I love it. I go to shows and I’m constantly watching.