Having just hit the UK for their first ever shows at C2C then Dingwalls Brothers Osborne are releasing a ‘deluxe version’ of their album Pawn Shop. People often complain that they’re mugged off by these new versions that come out forcing them to buy another copy but with iTunes these days if you have the original it’s just as easy to buy the extra tracks.

I’ve been hooked on ‘Pawn Shop’ for over a year now since it first came out so figured we’d not just review the new tracks but the whole damn thing so we can introduce it to those who haven’t heard it yet.

The album kicks off with Dirt Rich which is a kind of country/bluegrass/bluesy tune about having no money but being absolutely fine with that. It’s full of slide guitar and TJ’s deep vocals.

This is followed up by one of the latest singles from the album ’21 Summer’. This song has got classic written all over it. Lyrically it tells the story of learning life lessons from your first love and how it ‘made a man’ of you. The music is wonderfully melancholic with jangling acoustic guitars and a melodic guitar riff. It’s full of hooks and a big chorus that’ll have crowds singing along.

Last year the band hit number one in the Billboard country chart for the first time with track tree. ‘Stay A Little Longer’ was co-penned by Shane McAnally and is everything that a country song should be. It has fantastic lyrics which, much like ’21 Summer’, evokes fond memories. The most prominent part of this song though is the three and a half minute guitar solo from John Osborne. Country seems to be sliding away a little much from celebrating great musicianship on records at the moment but this one drags it back.

The title track is up next and ‘Pawn Shop’ heads back to ‘Dirt Rich’ territory with its slide guitar and rootsy sound. It’s a great example of the musicianship in the band and what the guys can do.

The bands first ever single ‘Rum’ follows up as track six of the record. It’s great summery singalong tune about, not so surprisingly, drinking. The intro to the song has the band talking in the studio which is another factor that sets it apart from other overly polished country records. This will be a great Summer drinking soundtrack for a lot of people!

Lee Ann Womack makes a guest appearance on the fabulously old school country love song ‘Loving Me Back’. Her high vocals over TJ’s baritone voice blend perfectly and John adds to this with his hot guitar licks. It’s the type of country that people have been asking for for years now.

‘American Crazy’ is another up tempo song and acts as an ode to the bands home nation and how, despite their differences, all Americans share a lot in common. It’s perhaps a more fitting song that ever at the moment. As TJ said before they started it at their London show “America is crazy!”

Another of my favourite tunes is up next in the ode to forgetting your troubles, moving on and smoking weed – ‘Greener Pastures’. It’s a kind of jaunty and upbeat song that kind of represents the idea of smoking something to take away any worries. The lyrics are brilliant and witty and the music is spot on as always.

‘Down Home’ kicks off with a brilliant kind of garage blues/country guitar riff played on a nicely overdriven guitar with a slide. It adds another rocky song to the album and is definitely the place where TJ’s vocals and John’s guitar chops can shine.

The penultimate track on the original version of the album is ‘Heart Shaped Locket’. It’s another brilliant tune with all that we’ve come to expect from a Brothers Osborne song by this point.

The album is rounded off by the bands current single in the States ‘It Ain’t My Fault’. This is another of those rollicking rock songs which has superb lyrics. The chorus of “I got my hands up, I need an alibi, find me a witness, who can testify, you make a mistake, you got the wrong guy, I’m only guilty of a damn good time no it ain’t my fault” is a particular favourite.

The first of the new songs on this ‘Deluxe Edition’ is ‘Let Me Love The Lonely Out Of You’. This is a brilliant slow blues-country song where John’s guitar playing is almost Hendrix-like. TJ’s husky vocals are the perfect accompaniment to this song.

‘Shoot From The Hip’ kicks off with a brilliant reverb soaked intro which sounds like it could almost be from a western movie especially with someone whistling over it. It then launches into a guitar riff. It’s very much a western style country song which tells the story of a town full of outlaws and how the law is often best sorted with a gun – “sometimes the only peacemaker is a hairpin trigger and a fingertip”.

The final song on the ‘Deluxe Edition’ is ‘Arms of Fire’. Admittedly this is one of my least favourite songs on the record. This doesn’t mean that it’s bad it just means that they’ve set such a high standard with the other tracks! Either way is a decent rocker and brings the album to a close nicely. 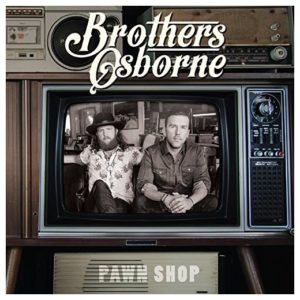 This record really is one of my favourites in recent years. It’s got a bit of everything – there’s Country, blues, garage rock and more! In this way it’s perfectly titled as ‘Pawn Shop’. The band show off how they can hit these many styles but also do it well. The musicianship is spot on and John really is one of the best guitarists out there whilst TJ’s ‘rough around the edges’ vocals are the perfect antidote to rapping Country stars. This deluxe edition brings three new songs to the table and they only serve to enhance the record and are well worth investing in.

21 Summer, Stay A Little Longer, Greener Pastures, It Ain’t My Fault, Let Me Love The Lonely Out of You

You can buy the reissued version of Pawn Shop complete with the three new tracks, revised artwork and a poster here