In September 2016 Zac Brown released a new track for a mysterious side project. The track, Sunday Finest, 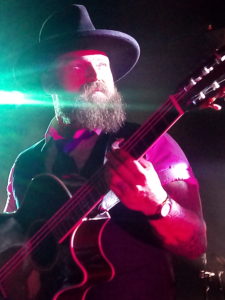 had no major press release and came with no news of other band members or potential plans. After performing with ZBB over the country to country weekend in Dublin, Glasgow and London Zac, Niko Moon and Ben Simonetti headed to an intimate setting at the iconic Scala venue in London for their first ever headlining show of the new act, Sir Rosevelt. With an album, due later this year, which also features co-writing credits for Jason Mraz, only three songs have been released via social media to date and nobody knew what to expect from the night. The sold-out crowd of just 1000 (without a cowboy hat in sight) was ready for anything.

With all three having recently worked on ZBB’s Jekyll + Hyde album and co-writing My Old Man, the lead single for ZBB upcoming album Welcome Home I think many were secretly hoping Sir Rosevelt would be similar music or they wouldn’t have enough material to fill the night and resort to the more familiar tracks. Considering it only cost £20 a ticket I went along with a very open mind.
The only thing similar about this was the sound of Brown’s voice. 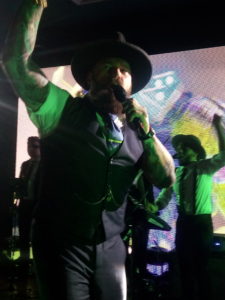 The night opened with a previously released track, For My Own. Dressed in suits, Sir Rosevelt promised they would be putting on a show and they weren’t kidding. Being backed by percussion, trumpets, saxophone, drums, a big screen and dancers for each track this was about as far away from a country concert as you could get. The southern dance, electro, pop (I think) group played all the tracks that are set to be on their future album; leaving the question of who is Robert Baker? (there is a clip of this track on YouTube) as apparently everywhere we go all the people know Robert Baker!! It was slightly strange being in a crowd were the vast majority didn’t know any songs and a handful knew some of the three previously released tracks. Brown made his presence felt on the stage for the evening (with a bit of dad dancing along the way) but wasn’t always front and centre with both Moon and Simonetti taking over lead vocals on several tracks. They also treated the crowd to an upbeat dance cover of Indie Rock artists Rag’n’Bone Man’s Human. Brown didn’t talk much on stage and in a show lasting an hour offered little in the way of when we would hear more from Sir Rosevelt or what the plans for the band were. As the night was coming to a close they played another previously released track, Nothing’s Gonna To Stop Us, which I’ve got to be honest I’m still not sure what was going on with the dance moves. For the encore the first single, Sunday Finest, finished off one of the more interesting concerts I’ve been to in recent years.
You genuinely didn’t know where to look there was so much going on! If anyone was tired after a weekend of C2C this would have woken them up.

This side project is clearly something Brown is passionate about as he can show his diversity and not upset the ZBB fan base. There are still many unanswered questions people have about the band I’m sure but it’s safe to say it won’t be the last we hear of them.

Fans have headed to the bands Facebook page today to post their positive comments about the night with everyone enjoying loving a fun entertaining show. Going in with an open mind was the best option for this evening and it didn’t disappoint. This may be one of the few reviews you read on this site that has nothing to do with country music but if or when Sir Rosevelt return to the UK I’ll certainly be going again.

Brown promised they were gonna bring the energy on stage and they certainly did that.