I’m one of those music fans that just love meaningful lyrics. I’m always trying to find out who wrote my favourite songs and the beauty of country music is that there is a huge community of incredibly talented songwriters out there. Every now and then one of those songwriters will break free from behind the pen and get behind the microphone, for example Kacey Musgraves, Old Dominion, Brandy Clark or many others. Steve Moakler was, along with Travis Meadows, one of the writers behind one of my favourite songs and one that was made famous by Dierks Bentley – ‘Riser’.

Although he has released albums in the past and certainly had some success as an artist Steve Moakler has just released an album which could help him see his way into the country radio big time. ‘Steel Town’ was released on March 17th this year.

It starts, quite similarly to Drake White’s ‘Spark’, with a spoken word intro from an old recording. It’s a fitting start to an album that serves as a tribute to the town and people that raised him in Pittsburgh, Pennsylvania. The song starts off with Steve and his acoustic where he sings about life in the town and it really kicks in as Steve sings about how “you learn how to bend and not to break” in a ‘Steel Town’. It’s a real personal slice of Moakler’s life where he really let’s the listener into what his upbringing was like.

Next up is ‘Suitcase’ which is already a favourite of mine from the album. I love Moakler’s vocals here as they smoothly blend with the big guitars in the chorus. He doesn’t really have the typical ‘country’ sound to his voice, which I find nice – it’s almost got a hint of Californian rock to it. The song is lyrically about how he’d be fine with nothing but the woman in his life and how he’d take that over riches any day. I love the line “everybody wants to chase the rainbow and find a pot of gold, hoping there’s a suitcase full of money but all I want is you honey”.

‘Jealous Girl’ is a song that I’m sure many men across the world can relate to and, truth be told, if the roles were switched women could too. It’s about how a woman can just completely rock your world and start making you act in strange ways. “It ain’t justified but I can’t help feeling jealous girl, I’m wishing you were mine are you someone else’s jealous girl?” is all about feeling jealous even when you have no right to but desperately want to be. It’s an upbeat rocker with a big chorus that’ll stick in your head for days.

Moakler brings the tempo down a little for ‘Summer Without Her’, which is a nostalgic look back at better days when the right girl was there to spend the summer with him. These kinds of songs really show off the talent that Moakler has for song writing and finding just the right lyrics to fit with a certain mood “the sun ain’t as gold as the memories I hold so I’ve been thinking about her” casts a sad look at the past and missing someone.

The upbeat and jaunty ‘Love Drunk’ comes next and it’s the perfect pick-me-up from the deeper themes of ‘Summer Without Her’. It’s a smooth, summery tune with playful lyrics about how a woman makes him feel drunk “you got me dizzy all up in my head”. Moakler’s smooth vocals go perfectly over this tune and work nicely. It’s definitely one to get people dancing at shows.

‘Hearts Don’t Break That Way’ is a somewhat slower and soulful song that slots nicely in as an album track. It’s got a nice meaning about how hearts break and can’t be put back together.

The latest single from the album is up next in ‘Wheels’. This is a really great song and it’s easy to see why it has attracted some attention from country radio. It’s rolling acoustic guitar fits perfectly with the theme of the song being about how life just rolls along and get faster by the day. It’s a beautifully reflective song and really shows off Moakler’s lyric writing at its best. It reminds me a lot of Moakler’s version of ‘Riser’ with the fingerpicked guitar and thought provoking lyrics.

The rollicking ‘Siddle’s Saloon’ hits us next and really feels like it’s here to get the party started. This is a song that Moakler describes as being about the bar that his grandfather built in his basement that Moakler describes as “when someone says the word ‘family’. That’s where I see family”. It’s a really fun song looking back at the good times that they’ve had there over the years by evoking the conversations of the past such as “it survived Vietnam and Bush one and two”. This song will be killer live!

‘School’ comes next and it’s a stylish tune about watching a woman who does things her own way and leaves everyone in awe – the kind of stuff that they don’t teach you in school.

The penultimate track on the album is ‘Just Long Enough’. This is another favourite of mine on the album with fantastic lyrics and a real nostalgic feeling to it. There’s just a poetry to Moakler’s lyrics that draws you in to feeling everything that he feels. This song about lost love with hit many people hard. I particularly love the line “it was just long enough to mess me up if I let my heart go there”.

The album is finished off with ‘Gold’. It’s a song with a big chorus that’s quite similar to ‘Suitcase’ in that it focuses on not being drawn in by the material things in life but recognising the value of love “gold it’s the feeling of a hand you hold, the colour of a beer ice cold, coming off the sun, shining on us and the next thing you know her arms are wrapped around you”. 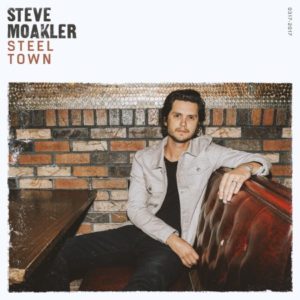 I’ll say it now – I really love this album. As I’ve said many times before I’m a huge fan of songwriter albums because they are just so relatable and are full of songs that make you feel. There’s nothing quite like a songwriter looking back on their life and putting it into song. On this album you can feel how personal every song is to Moakler. This homage to his home town of Pittsburgh has a little bit of everything to it – it’s got big rockers like ‘Siddle’s Saloon’, it’s got tender moments like ‘Wheels’ and more. Even though he’s released albums before I’d be very surprised if this isn’t the one that catapults him into the big time and it’s well deserved!