Coming from Guildford, being a country band is really a novelty. Actually, Backwoods Creek might be the only 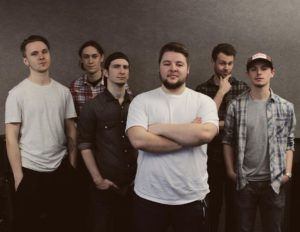 one. I met these six guys – Jamie Wood (lead vocals and guitar), Yannick Van Riet (guitar and backing vocals), Dean Parker (guitar and backing vocals), Jacob Stirrat (fiddle), Jack Densley (bass), and Kamil Bartnik (drums), on at a ‘country night’ event in Camden a few weeks ago. They surprised me with their energy and passion for performing. With a new EP coming out in the summer, and fun shows at the Country To Country festival, this year is looking promising for this up-and-coming band.

Greta: You guys started the band in 2014 and released an EP in 2015, so can you tell me a little bit about how the band came together?

Yannick: Well, we all met in college, we all went to ACM – Academy of Contemporary Music in Guildford, and we kind of get to know each other. Slowly, me and Jamie started jamming with each other.

Jamie: I think me and Yannick met and we were playing hard rock, and I started getting into country music. Then I forced Yannick to listen to it and eventually he did and now he likes it!

Yannick: I love it!

Greta: So how exactly did you get into country music anyway?

Jamie: I think someone lent me a Brad Paisley CD, I think “Time Well Wasted”, it’s one of my favourite CDs to this day and since then, I was hooked and it kept happening.

Greta: For people that don’t know you, can you tell me a little bit about the music you play?

Yannick: Yeah, we tried to mix a bit of the traditional with the modern together.

Jamie: We tried to keep that country element to it.

Jack: Try. Try is the word.

Yannick: We are very much influenced by bands like Zac Brown Band, who do a lot of different styles as well within their country court really. We love that kind of stuff and love that diversity and try and incorporate that.

Jamie: Try and keep it as fresh as we can.

Greta: I know I asked you this a little before. Who is the artist you were most excited about at C2C?

Jamie: Well as I said before he’s the one that got me into country so it’s that roots kind of thing and he’s just an incredible musician – guitar, songwriting…

Yannick: For me it’s Brad Paisley as well, purely on the fact that he is in the top 3 favourite country artists and I’ve not seen him live yet. Apart from that, Brothers Osborne and Maren Morris.

Greta: Have you been to the festival before or is this your first time?

Jamie: Yeah, we supported… well, we were the backing band for a lady named Alice Wallace last year so we got to play the Town Stage and Brooklyn Bowl. Personally for the festival I’ve been to every one since it started. *looks to Yannick* I think you’ve been to the last two?

Jamie: and then these guys…

Greta: So, how do you think the festival is doing, is it improving?

Yannick: I think it’s improving, if not consistently good.

Jamie: When they added that third day it really made a big difference. That third day really makes it a festival, not just a weekend. So I think that made the difference for me.

Yannick: There’s something about three days, you know, all the big festivals have three days.

Kamil: No camping though.

Jamie: Yeah if only hotels were cheaper it’d be better. Just tents inside the O2… a tent in a tent.

Jack: Why not? That’s a great idea!

Greta: So what do you think attracts the US artists or even the people, to come over here for the weekend?

Yannick: The big US acts.

Kamil: I think, in general, live music is coming back, people kind of want to see a live band rather than go to a club. People would rather pay a little bit more to see a band which is nice.

Jack: It’s gone back in time!

Greta: You mentioned that you have a new EP coming out so can you tell us a little bit about the new music?

Jack: That’s what we do and because it’s easy.

Kamil: You’ve got me in the band going *drum playing* ‘is this loud enough?’ …yeah, yeah.

Yannick: I guess it’s natural for us. Before we listened to country, we were into rock. Even from rock, to hard rock, to metal. It only feels a bit natural to bring that element in for us. But there’s still enough twang for the country fans to like it.

Jamie: We’ve done a pop-ier tune, a more traditional country tune but remained our sound which I think is… On our first EP we had, kind of four songs, almost a different style of country, kind of finding it. Now we have an idea of what our sound is so we’re trying to incorporate that into it.

Kamil: And above all else, it’s mainly about having fun. Every song regardless of whether it is a slow song, or getting drunk or a big rock song, we’re always having fun.

Yannick: I suppose we try to capture what we do live as well, in the studio. We’re really energetic when we play live, we go full throttle on it.

Greta: Yeah, you guys do, you definitely move a lot on stage.

Jack: Well we try! There wasn’t a lot of space today…

Kamil: I’d move a lot more if I wasn’t sat down. (laughs)

Greta: (To Jack) You photobombed so many pictures of mine.

Greta: Yeah. So I was taking pictures of random things…

Jack: What and I just kept putting my head in the way?

Kamil: He has a habit of doing that.

Greta: Do you know what? You might have a few good ones…

Greta: So, last question, do you have any other gigs scheduled? If people miss you at C2C, where can they catch you?

Yannick: The next big one is Buckle and Boots in Manchester on 23th of June I think we’re playing

Jamie: Yeah and we’re playing about all the time as well so best thing to do is check Facebook, check our website, BackwoodsCreek.co.uk

Greta: When is the EP coming out?

Jamie: EP will probably be early summer this year. We haven’t got a definitely date yet until we finish recording it but keep an eye out, it won’t be too long now.