Reading about Angaleena Presley’s new record ‘Wrangled’ before release was quite an intimidating thing. From back as far as her Pistol Annies days Angaleena, for lack of a better word, hasn’t taken any shit! This is an album born out of the frustration of the Nashville Music Row fat cats and the crushing rise of so-called ‘Bro Country’ that destroyed everything else in it’s path – especially those inroads that once existed for up-and-coming female artists. Of the Annies only Miranda slipped through the door before the tank top wearing beer swilling ‘boys of bro’ came rapping their way in front of it like an avalanche. There’s now a glimmer of light with Maren Morris one of the names making it through and Angaleena has a lot to say!

The record kicks off as it means to go on with ‘Dreams Don’t Come True’, which has the raw and loose sound of a live recording. It starts with Angaleena singing alone then the band comes in. It’s a song that sounds almost defeated in its lyrics as Angaleena sings “dreams don’t come true, they’ll make a mess out of you”. It’s a refreshingly realistic look at life inside the Nashville machine. The song is co-written with Angaleena, Ashley Monroe and Miranda Lambert.

Things continue in the same vein with ‘High School’. I can’t help but think Angaleena has the sound of a country Gwen Stefani on this song. Again, it’s a quite mid-tempo song where the vocals are filled with hurt and disappointment.

We hit on some classic two-step country with ‘Only Blood’. It’s a very simple song with a wonderful plodding upright bass driving it along. Angaleena’s song writing story telling talents are apparent in this song which is co-written with the man of the moment Chris Stapleton and features vocals from Morgane Stapleton. It’s wonderful in its simplicity and you could imagine this being performed in a smoky Music Row bar.

‘Country’ starts off sounding almost punk rock in its tempo and racing guitars. The song is a million miles an hour and effectively names every single country music cliché that you can think of. One can only imagine that this is an intentional jibe at the industry. Yelawolf pops up with a rap which just about lays down the law courtesy of Angaleena as he says “Thank God for Sturgill Simpson ‘cause Music Row can fuckin’ save it” and talks about ‘country posers’ and how the odd real artist will never make it. This is music made by a seriously pissed off artist!

The title track ‘Wrangled’ sends us in the opposite direction to the previous song with a beautiful, soft acoustic guitar intro and Angaleena showing off what she can really do with her vocals. It’s a call to arms for women in country music as she sings “Bible says women are to know their place… might as well be hog tied and strangled, I’m tired of waking up feeling like I’ve been wrangled”.

Those badass and cutting lyrics continue with ‘Bless My Heart’. This thumping country number is all about the lyrics as Angaleena threatens “if you bless my heart, I’ll slap your face” and sings “you knock a girl down, so you can feel tall”.

‘Outlaw’ is a song where Angaleena sings of giving up and not wanting to keep trying to be herself any more. She sings about how she doesn’t want to be an outlaw or a renegade and just wants to be a ‘straight shooter on the hit parade’. This is an album of really changing emotions and you can almost feel that ride that Angaleena has been on trying to make it.

The rocky intro to ‘Mama I Tried’ leads into a great upbeat number about how Angaleena has tried to do what’s expected of her as a woman such as “painting up my face like a rodeo clown” but never wanted to do it. Musically it’s definitely one of my favourites on the album with the electric guitars and jumping bass really giving it a badass rock edge.

Angaleena has a co-write with the late and very great Guy Clark on ‘Cheer Up Little Darling’. The song starts with a fantastic Latin guitar whilst an audio of Guy speaking the lyrics plays in a fitting tribute to the man. This song is a real favourite of mine on the album. It has that beautiful western guitar playing along with Angaleena’s sweet voice. It’s a shame that, with all the cutting songs on the album, we don’t hear more of this.

‘Groundswell’ continues in the more traditional vein with a quiet opening verse leading into the big chorus. It’s a melancholy song that has a superb pedal steel solo – it’s one of my favourite instruments and always goes down well. Lyrically it’s about being on the road playing show after show and just hoping for the best with every ‘penny in the well’.

The penultimate song on the album is ‘Good Girl Down’. It was co-written with the legendary Wanda Jackson. After so many songs where Angaleena seems to go through a range of emotions from anger to giving up this song about how it’s a mans world but she won’t be kept down is refreshing. It sounds a lot like the type of thing that Pistol Annies would record.

The album is finished off with ‘Motel Bible’ that kicks off with a quite frankly awesome guitar riff. It’s a hand clapping, foot stomping belter of a song and ends things brilliantly. This is the type of song that you’d love to hear more of not just on this record but across the genre. It ends the record with Angaleena saying “suck on that” which about sums up the message. 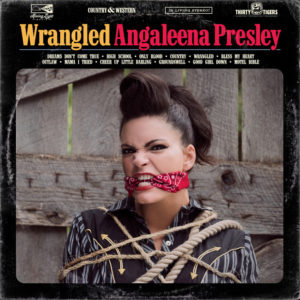 On the whole I’m not really sure how I feel about this record. The one thing that can be said for it is that it’s packed with passion and feeling. Presley had a hand in writing every song on here and also co-produced so it’s clear that it meant a lot to her. There are some truly brilliant songs on here like ‘Bless My Heart’ and ‘Cheer Up Little Darling’ but the first four or five songs almost feel a little too emotional for me – which probably sounds strange but, like I say, I don’t really know how I feel about the record. There’s enough brilliance on there to show that Presley has a Hell of a lot of talent but maybe the aftermath of her superb debut album and the lack of doors opened from it in the brutal world of Music Row left a bitter taste that just needed spitting out! This is an album that will upset some people but, in my opinion, deserves a lot of respect!