There was once a time where an artist like Sam Outlaw would come along and we’d say how rare it is to have a more traditional artist enter the scene – these days we have an embarrassment of riches with the likes of Chris Stapleton, Sturgill Simpson, Cody Jinks and Jason Isbell flying the ‘classic country’ flag. Outlaw (yes, that’s a real family name) is another name that we are hearing more and more of. The follow up to the self-styled SoCal country artist Outlaw’s debut ‘Angeleno’ comes in the form of ‘Tenderheart’.

The album kicks off with the slow burning and beautiful ‘Everyone’s Looking For Home’. It’s a brooding and melancholic song that has you swaying along with its 6/8 rhythm. After about two minutes the twang of a guitar cuts through with the sweeping of mariachi strings. This is a truly beautiful song that lyrically nods a head to Outlaw’s coming-of-age themes on this record.

‘Bottomless Mimosas’ was one of the lead singles from the album and eases us in with some of that laid back SoCal country sound. That beautiful Telecaster twang along with the shuffling drums transports you to the West coast. Outlaw’s soft and gentle vocals just glide over it.

Track three is ‘Bougainvillea, I think’ (I think – having gone back to iTunes to check the spelling a dozen times!). This is Outlaw showing off his storytelling skills at their best. It’s a song that relies solely on the beautiful music with Outlaw’s lyrics painting a picture of a Mexican immigrant whom Outlaw knows and talks life with.

The title track ‘Tenderheart’ is one that could easily get Outlaw the recognition that he deserves in the mainstream. It’s opening and chord progression sounds reminiscent of Tom Petty & The Heartbreakers ‘Freefallin’’. It’s fantastic love song that, much like the opener, builds to a big crescendo. What I really like about this song is how it’s not a forced ‘big chorus’ and it just naturally builds to this. It’s a really great song and I hope to hear it make some waves.

Next up we have ‘Trouble’ which is really stone cold classic country. It’s driving acoustic guitars and twanging electrics set the base for a great country song about a girl who is nothing but trouble. By this point I have to say I’m incredibly impressed by the musicianship on the album – Outlaw has clear got some brilliant musicians on board and this foot stomper really shows that off.

On ‘Angeleno’ Outlaw had the song ‘Jesus Take The Wheel (And Drive Me To A Bar)’ and on this one we have another sight of his sense of humour with ‘She’s Playing Hard To Get (Rid Of)’. It’s a great heartbreaker of a song with pedal steel whining away in the background and Outlaw singing the song of a man down on his luck. This song could have been released by Waylon or Willie and would have been huge back in the 70’s. Hopefully Outlaw will get the exposure for it.

‘Two Broken Hearts’ is slightly more upbeat song about breaking up at the end of a relationship that was just no good and finding someone else in the same place. It’s a positive spin on the usual break-up song and shows light at the end of the tunnel “two broken hearts went missing nobody saw ‘em go, they found each other crying and slipped out that back door”.

‘Diamond Ring’ is a slower song where Outlaw just oozes the pain from his voice in a country heartbreaker. It has some great, almost Beatles-esque this time, guitar work through.

Another song that is an early favourite of mine on the record is ‘Say It To Me’. It’s a big number with a big sing-along chorus and an awesome pedal steel solo at the end. It’s another upbeat number which is something that ‘Angelino’ didn’t have much of and really helps this album come into it’s own.

‘All My Life’ let’s Outlaw show off his country singing chops. It’s a song that’ll get you wanting to dance. Lyrically it’s a fun look at how we’re all expected to settle down with the right person “I got all my life just to find a wife and you’ve got yours to find a man, but if you don’t mind I’d rather spend my time growing old together ‘til we reach the end”. Again, this tune is musically superb.

‘Dry In The Sun’ is a song about just letting life talks it course and not trying to force it. The metaphor in the title just sums up why I love Outlaw’s writing. It’s a carefree song that comes from a man who has been on a journey to get to where he is and is now accepting of life and it’s challenges.

The penultimate song on the album ‘Now She Tells Me’ brings back some of those influences from South of the border which were perhaps more prominent on ‘Angelino’ especially the guitar which has a very Latin flavour to it.

The album is rounded off with ‘Look At You Now’. This song sounds very raw and like it’s been recorded live. For an artist who spent years just playing with an acoustic guitar and his voice it’s nice to hear Outlaw strip it back to round off an album that has such fantastic production and musicianship. It’s the perfect end to the album especially when that pedal steel kicks in at the end for one last solo. 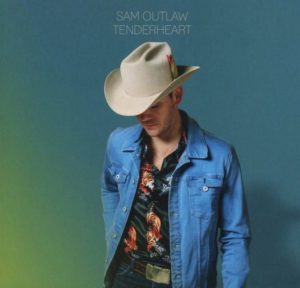 Sam Outlaw was incredibly fortunate in getting Ry Cooder and his son Joachim on board for his debut album ‘Angeleno’. On this follow up neither of the Cooder’s are involved yet musically it is way ahead of its predecessor. The guitar work on the record in particular is just fantastic and used tastefully and effectively along with the pedal steel. As a songwriter Outlaw must be up there with the best around at the moment and it must only be a matter of time before this is recognised. He doesn’t seem to care one bit about the manly posturing country that’s dominating the mainstream right now and instead opts to tell stories, share wisdom and open up his heart with his songs. Whilst the likes of Chris Stapleton may dominate the return of this sort of traditional country it’s vital that artists like Sam Outlaw continue to do what they’re doing to back it up. This is an album well worth a listen and shows that Outlaw can stand shoulder to shoulder with the aforementioned Stapleton, Isbell et al in keeping traditional country alive.

Everyone’s Looking for Home, Tenderheart, Trouble, Say It To Me