After Little Big Town’s last album, the Pharell Williams produced ‘Wanderlust’, that took their music in a different direction I was looking forward to them returning to their country roots with their new album ‘The Breaker’ and I have to say it is very enjoyable.

The album begins with ‘Happy People’. As the title suggests this is a happy, medium tempo song that essentially lists the positive morals and attitudes of happy people. For example, it states that happy people don’t cheat, hate or lie. The song also encourages us to be happy doing the things we like to do. It is a very positive opening track.

‘Night on Our Side’ opens with a lovely acapella vocal from the group really showing off that distinctive and award winning sound that they have. The song then goes into a country pop song that discusses that situation when you live life to the full at night and you feel anything is possible. It is a song that is neck deep in the Little Big Town sound and style.

The mood and tempo of the album changes slightly with ‘Lost in California’. The song describes being in California on a starry night with your partner and how you just want get lost in the moment. It is a very good love song and will strike a chord with any couple in that situation.

‘Free’ is probably my favourite song from the album. The song details all the different memories one can make in a lifetime and reminds us that those memories are free. When listening to the song you will probably find a memory that relates to you in some way. I think a standout lyric of the song is “We work so hard to have it all, when all the things we want are free” this song is a reminder of what really matters in life and that we shouldn’t take it for granted.

‘Drivin’ Around’ follows on nicely from ‘Free’. It suggests that driving around with your best friends with no particular destination in mind can allow you to make some of the best memories. The song features the vocals of the group heavily with very little musical accompaniment. It gives the listener a chance to hear those famous vocal harmonies at their best.

Continuing with the memories theme ‘We Went to the Beach’ almost reviews itself. The song discusses the annual trip as children some of the group members had. The song gives you the feeling of driving down the seaside road and the excitement that goes with it.

‘Better Man’, the lead single from the album, written by former country star turned superstar Taylor Swift is sung mainly by Karen and Kimberly. It details how someone wishes that their ex-partner could become a better man and make the right decisions in order to make it work. The song really shows off the vocal talents of the girls. This is a stand out track from the album and is a real heartbreaker with lines like “sometimes in the middle of the night I can feel you again but I just miss you and wish you were a better man, I know why we had to say goodbye like the back of my hand”.

‘Rollin” has a rocky feel to it which is slightly outside of Little Big Town’s normal sound but it works really well. The song is essentially a song that encourages you to keep going in life and keep rolling.

‘Don’t Die Young, Don’t Get Old’ is a song that reminds me of a saying that my grandmother said to me. The song message is obviously don’t die young but don’t allow yourself to get old either in terms of your personality and mentality. The song has a really good message.

I like ‘Beat up Bible’ because it is a song with religious references. The song details the story of a bible that has been through as much hardship as its owner. The song is very slow and has an almost unplugged feel to it. This really gives the lyrics the exposure and help get across the message of the song.

Once again ‘When Someone Stops Loving You’ is a song that could almost review itself. The song details the fact that when someone stops loving you life goes on. The song talks about all the things you still have to do but now you must do them alone. Although this song is a sad song it will probably help any listener who is currently experiencing a breakup.

The album ends on the title track, ‘The Breaker’, which is something I have never come across before. The song is very original in it’s subject matter in that it is written from the point of view of the person who broke someone’s heart. It is nicely linked with the preceding song and is perhaps not the song the album should end on considering the majority of the songs on the album are positive but it is a good song nonetheless. Interestingly the song is written by TJ Osborne of Brothers Osborne. 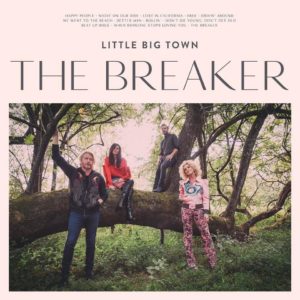 I really enjoyed this album. On the whole it had a positive message running through it and the songs are well written with meaningful sentiment. As usual the vocal talents of the group shine through above all else on the record. After hearing this album I am really looking forward to seeing them in October in London.