Love and War is Brad’s 11th Studio album. It is an album of 16 tracks, although the last track is a reprieve of the 1st track, wish someone would explain to me why artists do this, do they think we have forgotten the track, or do they think it is so good it needs a 2nd bite of the biscuit?

There are several collaborations on the album, including a rather surprising one – Mick Jagger, and also Timbaland, normally a rapper rather than a Country music collaborator! So at 1st glance, this looks as if it could be a rather interesting album!!

Well, let’s take a look shall we!!

Brad starts with a common theme in his music, his love for the South (America) and all it entails. ‘Heaven South’ is an uptempo number listing all the things that are great about the south, sweet ice tea, tractors, alcohol, curiously subwoofers also get a mention! The song is written by the familiar team of Brad, Brent Anderson and Chris DuBois. These guys write together a lot and feature several times on the album!

‘One Beer Can’ is one of my favourite tracks on the album! It is a typical fun track from Brad, however when it starts, you think it is going to be a horror story! Parents are away, so teenage lad throws a party that gets out of hand, with way more people turning up than expected. You think it is going to be a tale of woe & destruction, instead the lad with some of his buddies clears the whole place up, just in time for his parents to arrive home, only for dad to spot a single beer can that missed the clear up mission. It is almost as if the can was waiting & just rolled out on purpose when dad got home! The rest of the song is the lad watching the summer go past as he is grounded!

With ‘Go To Bed Early’, we have a love song, Brad is talking to his woman, she is all dressed up & ready to go out and they are deciding what to do that night, a party, a band downtown, but all Brad wants to do is take her to bed & spend all night there with her. There is the classic sentiment of that dress is fabulous, but it will look better on the floor!

For track 5 we have our 1st collaboration, ‘Drive of Shame’ is a duet with Mick Jagger. It starts with a quick conversation with Brad & Mick, but as soon as the guitar riff starts, if you were in any doubt who was on this track it would be dispelled, it sounds typical Mick Jagger, in fact my partner thought I was playing Honky Tonk Woman! It is a great blend of Brad & Mick, with neither of them compromising their own sound! Again a theme is tweaked and rather than doing the walk of shame, they are doing the drive of shame after the lady they spent the night with tells them in no uncertain terms to leave early the next morning. Actually Miranda mentions the drive of shame too in one of her songs, perhaps it is a thing in America?

Unrequited love is the subject of ‘Contact High’. Brad walks into a bar & sees a girl he is obviously crazy about, everything about the girl is driving him nuts, her smell, her dress. Her mere presence sparks his every sense. The sentiment is lovely, but I think the song lacklustre & for me there is too much guitar work going on in the back ground!

The title track of the album – ‘Love and War’ is the 2nd duet, this one is with John Fogerty. I will put my hand up here and admit I had no idea who he was & having now read up on him, I am still none the wiser apart from having learnt the very shocking fact that Status Quo’s iconic hit – Rocking All Over The World is a cover!! John Fogerty originally wrote it as part of his 2nd solo album in 1975. Status Quo covered it 2 years later & I think it is fair to say they made it their own! I digress! The track ‘Love and War’ is about young men being sent out to fight for their country, facing death and or disablement. Then when or if they do make it home they are forgotten about 10 minutes later! A track that is true not just for America! From the title you don’t actually expect a political statement, but that is what you have got!

‘Today’ was the 1st single to be released from the album. It is about memories of a good day carrying you through the bad days, it is about growing old together, but the love you share at the beginning of the relationship carrying you though bad days later on. It is a great track.

There is a very strong message in track number 9 – ‘selfie#theinternetisforever’. Brad performed this song at Country 2 Country this year. It actually goes very well with Online, for some reason though he didn’t perform the 2 together! The message in this track talks about the danger of posting random selfies on social media, without taking due care and attention, not just of what is going on around you, but also what this could mean to you later in life! The video to this track is great, Brad asked people to send their selfies in and then made it into a video, look carefully at the band!!

Watch the video for ‘Selfie#theinternetisforever’ here

The start of ‘Grey Goose Chase’ takes me back to the 1990’s & the likes of Brookes & Dunn, with a toe tapping beat & yeehah-ing going on. The song remains up tempo all the way through & has several yeehahs! It is a bit of a nonsense song though, apparently it features Timbaland, but not sure where! Not one of Brad’s finest!

Whilst I am at it, neither is the next song ‘Gold All Over The Ground’. This is another lacklustre track. Brad has his lady on a pedal stool, he worships her and wants to protect her and give her everything her little heart desires! It does feature the voice of Johnny Cash talking about June, apparently the song is based on a poem written by Johnny, but the track does nothing for me at all, then again, I have never been very keen on Johnny Cash, that could have something to do with it!

This then brings us to ‘Dying To See Her’, written by Brad and Bill Anderson. This is a song in league with Whiskey Lullaby, which Bill also co wrote on! A man’s wife dies, she was his whole reason for living and without her he is nothing and losses the will to live. He gradually slips away with no apparent reason as to why, except, he is dying to see her! A clever play on words and a beautiful song.

‘Solar Power Girl’ is a song I think most of us can relate to, especially February, March sort of time. A young girl is off to college, but she has picked one where the weather is a lot better than where she lives, but as the song goes on you realise it is more than just the weather she is escaping, it isn’t just the weather that is dismal, it is also her home life. There is a wonderful line in this song – “Her mother worked two jobs, Raised her all alone, How come superheroes always come from broken homes.”

Today’s troubled times is the subject of ‘The Devil is Alive and Well’. Everywhere you look is bad news, so the Devil must be prospering. It is a thought provoking song.

‘Meaning again’ is another love story, but this one is not lacklustre, this is a feel good song. Brad is questioning his life and his purpose, then she smiles & says I missed you & all of a sudden life is good again and worth living once more. This track goes well with Dying to See Her.

‘Heaven South (Reprise)’ is the final track, it is only a short snippet, it is basically the chorus of the 1st song, but again there is a message, look around you, don’t just focus on the bad stuff. 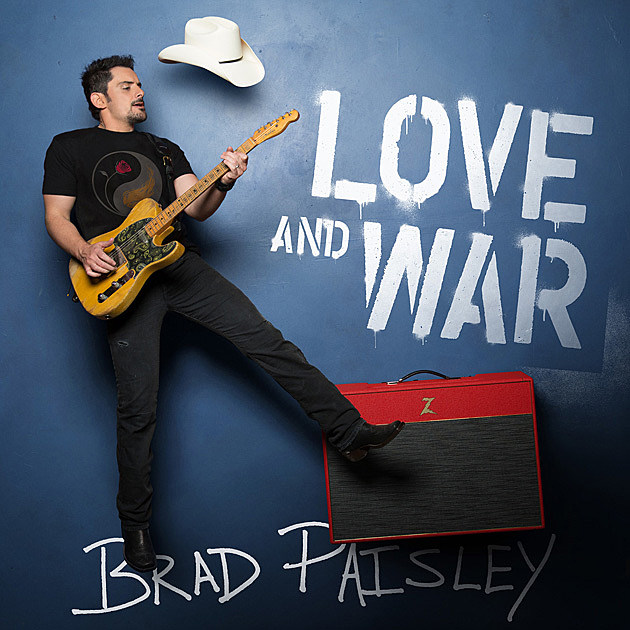 Before listening to this album, I had read a lot of comments from people saying this is Brad’s best album yet. I disagree. I found several tracks to be uninspiring and dreary. It is a lot of same old same old, songs that reminded me of other Brad songs. There are a couple of good songs and a couple of great, but on the whole the album left me wanting and I cannot see me playing it again for a very long while – if at all – although I would be happy to listen to some of the tracks on a playlist.

One Beer Can, Today, selfie#theinternetisforever, Dying To See Her