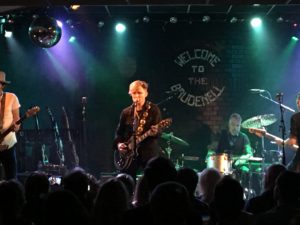 year I’d have laughed in your face. Well, thanks to C2C and the rise in popularity of country over here, Frankie has not only been back three times but this is his second time playing Brudenell Social Club in my home town of Leeds. This is massive. Leeds isn’t a country music city but, along with the likes of Mo Pitney, Andrew Combs and more, is attracting the big stars. Even at 6pm as I went into the venue for our interview with Frankie there was a large queue forming. It was actually very interesting listening to some of the chatter with comments like “you’ll really like his guitar playing” and “he’s got great tattoos!” hinting to the fact that Frankie’s fans were introducing their friends to him for the first time.

The show kicked off with a double whammy from the ‘Sunshine & Whiskey’ album. The rowdy ‘Drinky Drink’ started things off and was followed up by ‘Young & Crazy’ which got the crowd moving. Frankie and his band were clearly up for the show and came running out of the blocks.

My one criticism, especially early on, was the mix. We were stood close to the sound desk but it was very hard to pick out Frankie’s vocals over the rest of the band. It’s a shame as Frankie really is a great singer and is just as good live as he is on record.

The first song of the night from ‘El Rio’ followed in the form of ‘Little Bit of Both’ before Frankie cried out “who wants to hear some of the Man in Black!” and launching into a brilliant electric version of ‘Folsom Prison Blues’. This is always a smart move at a show like this as many of those people who were hearing Frankie for the first time could grab something that they recognise to ease them into the show.

After ‘Tell Me You Get Lonely’ Frankie introduced some songs from ‘El Rio’ and talked about how they’d headed down to the El Paso desert to record the album and how inspiring it was for him. A triple shot of the crowd sing-along favourite ‘Wasting Time’ followed by ‘It All Started With A Beer’ then ‘Cigarette’ ensued. This really showed off the variety that ‘El Rio’ has to offer the listener with the songs ranging from the more soft and mellow acoustic in ‘Beer’ and the badass guitar riff of ‘Cigarette’.

‘Helluva Life’ ‘LA Woman’ and ‘El Camino’ followed with the band absolutely blasting through the latter two in true rock and roll style. Frankie also introduced his favourite song on ‘El Rio’ in ‘Good As Gold’. This is one of my favourites too but I have to say the sound mix didn’t enable us to get the best rendition of the song – Frankie still absolutely shredded through the solo though!

Before the show I’d mentioned to Frankie how much I’d enjoyed the Elvis Presley melody that he’d done last time out in Leeds and this popped up next. It’s great to hear this live as you can really get a strong perspective on where Ballard’s influences came from.

The set was closed out by the current single and Bob Seger cover ‘You’ll Accomp’ny Me’ and Frankie’s big song ‘Sunshine & Whiskey’. At the end of this the crowd were really giving it back to the band and singing along with every word.

Without leaving the stage Frankie and the band launched into the final track from ‘El Rio’ which is the beautiful ‘You Could’ve Loved Me’. After Frankie had spoken about the bittersweet feeling of completing their latest UK tour they closed the night out with a lot of thank you’s and appreciation for the fans turning up. The crowd were sent into a rapturous applause at the end and it was made very clear that Frankie and the band are welcome back in Leeds any time!

You Could’ve Loved Me