How do you follow up your debut album when it was the biggest selling Country album of 2016, won you CMA Album of the Year, Male Vocalist of the Year, and New Artist of the Year, as well as the Grammy for Best Country Album? This is what Chris Stapleton faces with releasing his sophomore album ‘From a Room: Volume 1’. Released exactly two years after his debut ‘Traveller’ Stapleton delivers his first volume of the record, complete with nine tracks, all recorded in Nashville’s RCA Studio A. Despite having written multiple Country number ones, and a track for Pop Star Adele, it was Stapleton’s debut album which really put him on the map. At a time when many fans of the genre have been complaining that current Country isn’t Country enough, Stapleton came along with a classic Country album which had the relevance and fire to catch a modern fan. I, for one, have been desperately awaiting the release of this album. But I also had my reservations, how can you possibly follow up ‘Traveller’?

The album opens with ‘Broken Halos’ which is the lead single from the album. Unlike many of the album’s tracks, Stapleton doesn’t lead you in with a beautiful guitar piece, instead, he dives straight into the lyrics. The vocals on this song are effortlessly beautiful, but you wouldn’t expect anything else from this man. I’ll be honest, I like this song, but it feels a little safe. It doesn’t tear straight into you in the traditional Stapleton style. It’s a good song, you immediately know whose song it is, and I think it makes a good radio song as the lyrics are fairly repetitive. ‘Seen my share of broken halos, Folded wings that used to fly’.

The second song is the only one on the album not co-written by Stapleton as he covers Willie Nelson’s track ‘Last Thing I Needed, First Thing This Morning’. Stapleton has the unique ability to cover a song and still make it sound as though it’s his own. For me, songs like this are what Stapleton’s voice is made for. He sings in a way that gets into your bones and it’s as though he’s singing your emotions. It’s a heart breaking song, and this feeling is emphasised by his wife Morgane’s harmonies on the chorus. Musically, he’s added the Chris Stapleton touch with harmonicas enriching the devastating heartbreak of the song.

‘Second One to Know’ kicks the album back upbeat with a punchy, rich guitar intro. This song has a slightly different feel to the songs on ‘Traveller’ and takes Stapleton into a more rock-inspired sound. It’s a nice balance to the ballad previously. There’s beautiful and fulfilling guitar solos interjecting the vocals. ‘And if you ever change your mind, Wanna leave my love behind, Just let me be the second one to know’. But sadly, the song just fades out at the end, and it would’ve been rounded the song off nicely if it finished with the punch it started with.

Lyrically, I really love track four. It has some stand out lyrics, which on first listen I felt were really clever. ‘Up to no Good Livin” is a song about a reformed wild man who wants to prove to his love that he has changed. ‘I used to drink like a fish and run like a dog, Done a whole lotta shit not permitted by law, People called me the Picasso of painting the town’. This song has a real classic Country feel to it, with a nice Bluesy twist. He’s cleverly revamped a classic theme and sound and given it the Stapleton spin. It’s a great song.

‘Either Way’ was originally recorded by Lee Ann Womack as an album track, although written by Stapleton. The song opens softly and the singing is barely a whisper which makes the song feel more intimate and emotional. It builds up to the big, heart wrenching chorus, where it feels as though Stapleton is pouring his feelings out for all to experience. The song describes someone wanting to leave their lover, regardless of whether they want them to stay and work on it. ‘We can just go on like this, Say the word, we’ll call it quits, Baby, you can go or you can stay, But I won’t love you either way.’ This song is raw and beautiful, with a big focus on the vocals and the simple guitar enhancing the emotion throughout.

It then flows into the electric guitars of ‘I Was Wrong’. This follows on perfectly, as it’s about a man that regrets saying goodbye to his lover and telling them he still loves them. The electric guitar solos bleed regret and work beautifully with Stapleton’s raspy tones. His vocal range really shows the depth of emotion felt in this song and the song’s desperation. If you’re a big fan of Stapleton’s voice and vocal range, then this is definitely a stand out track. If you’re in the same situation, or have ever been, it’ll feel as though he’s belting out everyone of your thoughts and sharing your soul.

Track seven is ‘Without Your Love’, a song with a soft introduction and filled with stunning harmonies. Again, this is a lyrically beautiful track. It follows the heartbroken theme of the album and Stapleton declares how life is without his love. ‘Without your love, Every hour is the darkest time of day, And every moment’s a crime’. It’s not a big song, but that doesn’t stop it being memorable. You really get into the feel of the song. It has a more commercial feel to the song; I don’t feel like it will alienate anyone who doesn’t consider themselves a big Country fan.

‘Them Stems’ has driven comparisons to ‘Might As Well Get Stoned’ from ‘Traveller’. You can see why, as they have a very similar theme. It’s a good balance to the break-up songs which have come before, and it gives you an upbeat break. It has a strong blues feel to it, with a big sound and enjoyable rhythm. Listening to it, it’s not that surprising that Country was recently discovered to have more songs referring to drugs than any other genre.

The final song of the album is ‘Death Row’. Stapleton explores an inmate waiting to take his last breath. Not a subject many genres or artists would dare to explore, but he does it beautifully. On this song you can really feel Stapleton’s love of the Blues. ‘Got a calendar up on my wall, Marking days till I get the call, Till it’s time for me to go, Death Row, Death Row.’ The song is simple but effective. The tragic story of the song is felt in every movement of the song, especially as the song slows down, getting quieter and gently fading out at the end, as though mimicking the inmate’s last breaths. It’s a stunning song. 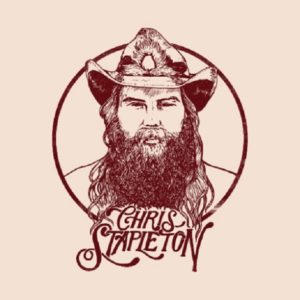 Everyone will compare this album to ‘Traveller’; it’s hard not to. But to really enjoy it I feel like you have to almost ignore ‘Traveller’ and enjoy the album on it’s own merit. Honestly, it didn’t grab me on the first listen. But giving it a second chance and a third chance was definitely needed. Chris Stapleton beautifully demonstrates his ability to look inside your soul and sing it out loud. His fantastic, soulful, and enchanting voice, alongside beautiful harmonies provided by Morgane, and a Blues and classic Country inspired musical backdrop makes for another beautiful album. Is it another ‘Traveller’? No. But it’s entirely beautiful in its own right. Stapleton is unique in his musical offering and he has that magical ability to both write and sing songs which will last a lifetime.

Up to No Good Livin’, Either Way, and Death Row.

One thought on “Chris Stapleton – From A Room Reviewed: Highly anticipated return of the modern day legend hits the mark”