Zac Brown Band, do they really need an introduction? Unless you have lived in a forest without any connection to the human kind, chances are you know who I am speaking about. Constantly fighting their bipolar reputation of being traditional country and pushing the limits of this genre, Zac Brown Band have had their days of glory, and their fair share of mixed reviews. With their newest album, Welcome Home, the band went back to the values they grew up on and, according to them, made their most personal album yet.

Back to 12 March 2017, not long until they were due on stage, Zac Brown Band in all of their glory walked into the Country To Country press room with the main topic of the conversation being the upcoming Welcome Home album. Unlike the previous albums, Welcome Home was written over the course of the year, with the band not using previously written songs, or old song rewrites. The album itself only took 6 days to record, yet listening to it, you don’t feel any rush. With the emotional first single, My Old Man, Welcome Home has many expectations to meet.

‘Roots’, the first song on the album, kicks off the project with a bit of a fiddle and a piano. A song acknowledges the band’s lifestyle on the road but makes a point about always remembering and coming back to where you come from. That could be an actual place, your family or just your values. With Zac Brown Band promising us the most personal album yet, it is only fitting it starts off with this particular song.

‘Long Haul’ continues the slightly perkier sound from Roots, but perhaps gives a small hint of soul throughout the song. With a cheerful melody, this song is not the one that would be my favourite, but it also isn’t one to skip. Songs like Long Haul are a safe option to put on a record because they are just enough rhythmic to keep you interested, and follow a theme of having faith in your relationship and making it the core of your life – something many aspire to. Writing about this understandably important topic, it could be tricky to make it stand out or to give it a personal touch.

‘2 Places At 1 Time’, one of the most authentic songs on the album, is a great example of this album taking Zac Brown Band to the sound that fits them the most – lead guitar and harmonies. Where Long Haul missed the individuality, ‘2 Places At 1’ Time picks it up. With continuing themes of home and family, this song specifically refers to Zac Brown Band’s success and experiences from all over the world, appreciating the life they have been given by their fans. But more importantly, it refers to their struggle of leaving their families behind and missing out on the home life. Perhaps a simple song on the first listen but I think it can really hit home for many.

Carrying on with the subject of a strong family bond from the previous track, ‘Family Table’ is yet another song placing the importance back to your home life. Slightly on the more upbeat side of the fence, at least in terms of this album, accompanied by a nice fiddle, Family Table is a good hum-along tune.

‘My Old Man’, the first single from the album, and one that got all of my attention prior to the release of this project. This song truly captures the identity of Zac Brown Band and the identity of this project. With the song reflecting on lessons Brown learnt from his father and how he wishes to pass them along, it is impossible not to feel the pure emotions coming through. Good one, Zac, good one.

After a bit of an emotional check from the previous song, ‘Start Over’ takes you to a whole different universe. Well, at least as far as it can go with this album. Sonically, this song has a raw guitar sound that can almost make you feel like you are on a beach or by some fire with the Zac Brown Band just jamming along to whatever they can. With a hint of a Spanish influence, Start Over feels out of place following a song like My Old Man. It definitely has its place on the album but perhaps it belongs somewhere else on the list.

The album finished off with a cover John Prine’s ‘All The Best’. Although, it is hard to give much credit to covers, this song is an absolute spot on ending. This slowed down version, with slight lyric tweaks, is a very simple yet powerful song. You can hear a bit Kacey Musgraves supporting Brown throughout the song which gives the song more emotion. All The Best is definitely not one to skip. 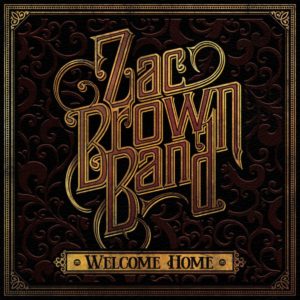 Thinking back to some of the mixed reviews and people wondering why Zac Brown Band went so left field from their usual music, it feels like we all asked for an album like Welcome Home. We wanted just Zac Brown Band. We wanted simplicity and music from the heart, not an experiment. To some people, Welcome Home may seem as a smart move for the band because it gave people what they wanted and maybe not what the band wanted to write originally. I can so see this criticism. However, I disagree. For me, Welcome Home gives the fans an honest account of what the band stands for, what they appreciate and value. Despite the very repetitive theme, you can hear that every song was written with care. And that is something to appreciate in today’s music business.

All The Best, Roots, My Old Man