Since the release of their debut album, 2015’s ‘Southernality’, A Thousand Horses have spent the majority of their time on the road. The rocking foursome, along with the rest of their live band, have become known for putting on some of the rowdiest and highest energy shows in country music. This has taken them all across the world and included a UK tour at the end of 2016 which was very well received.

For a band so busy on the road in a genre which sees acts churn out new music every other year if not more frequently it can be difficult to find the time to head to the studio. This could well be the reason behind A Thousand Horses releasing a digital EP this year as opposed to a highly anticipated new album. Michael Hobby recently told Entertainment Weekly that the project is “bridging the gap of what’s to come”. With this new release, ‘Bridges’, the band have treated us to six new songs from the studio along with live acoustic versions of seven others, which were recorded last year in London and Nashville.

The record kicks off with ‘A Blaze of Something’ a song that is the epitome of a foot stomping A Thousand Horses song. The song starts off relatively quiet but builds up into a huge stadium-filling chorus about giving it your all in life and ending up either going out in a blaze of glory or flames. Zach Brown and Bill Satcher lend their big rock-edged guitar sound to the track which is sure to be a big hit live.

With ‘Burn Like Willie’ the band give us something that’ll get the crowds up and dancing at any live show. With the rootsy slide guitar dancing around behind Michael Hobby’s vocals it’s a song drenched in R&B and Southern Rock swagger. There are quite a few lyrical nods to Willie Nelson along with the title such as “lead this horse to the Whiskey River” and “red bandana have one too many”.

Next up is the lead single from the record ‘Preachin’ to the Choir’. This is a typical Southern country rock song about drinking too much and having a good time. It’s an anthemic song which gets you singing along with it’s soaring chorus. Of all the songs on the album this one bridges the gap with ‘Southernality’ the most.

‘One Man Army’ is about as close to a ballad as A Thousand Horses get. It’s a fantastic song which manages to have both heartfelt and tender lyrics and balance them with that big rocky sound that the band exude. Lyrically the song is about showing strength and devote for the ones that you love “as sure as your heart beats you can count on me” and “when the world’s gone crazy, when you’re having a bad day, you can lay it on me”. Get the lighters out for this one live!

The title track ‘Bridges’ kicks off with an almost Red Hot Chili Peppers guitar riff. It’s a great song about looking back on life, letting go of all of the mistakes you’ve made and moving on from them. Hobby sings “looking back can’t help but laugh at all the pages I’ve turned, no worries it’s just water under the bridges that I’ve burned” which helps to create the feel of the song. It’s a song that you could listen to if you were in a bad mood or if you were angry about something you or someone else has done and just smile.

‘Weekends in a Small Town’ rounds off the new songs on the record and takes a thoughtful look back at hometown life. It’s quite cliché country in it’s subject matter and perhaps passes me by a little more than the others on the record as it’s not as lyrically relatable to me but it’s certainly not one that I’d skip. It does retain the same big arena sound that the band seems to be moving towards.

The second half of this record is devoted to live versions of the bands previously cut songs. The majority of these (save for ‘Smoke’ which was recorded at Printer’s Alley in Nashville) were recorded at Metropolis Studios in London at the end of the bands UK tour last year and put straight onto vinyl for those present. The live songs are a great way to showcase the bands talents when performing live and also help to flesh out the record. It almost links quite fittingly as if the band are saying “here are some new songs for you and here’s why we haven’t had chance to get a full album together”. 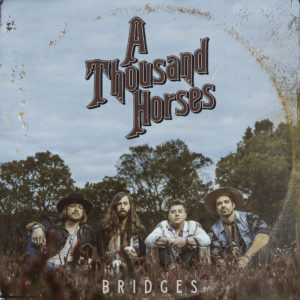 This collection of songs is a fantastic return from A Thousand Horses. The band can be forgiven for taking a little time between releasing records as, when you listen to this EP, you can hear the growth in their sound which has come from constant touring in big arenas and stadiums with the likes of Darius Rucker and Jason Aldean. The songs have big choruses and huge guitars throughout whilst Michael Hobby’s trademark snarl cuts through each track. The band haven’t lost their hard edged, for lack of a better word, Southernality with this shift in gears though as songs such as ‘Preachin’ to the Choir’ showcase that hard drinking attitude, ‘Bridges’ is full of R&B flavour and tales of moving on from ‘done-me-wrongs’ and ‘Weekends in a Small Town’ is just self-explanatory country music. The idea to add some live songs on there to flesh out the record is great and gives fans a little more material to enjoy – even if it does lead to the EP costing £10.99 on iTunes UK! Having said that the price is well worth paying for some great music. If this is the bridge that leads us into the next A Thousand Horses album then I can’t wait to get across it!