Last summer I was introduced to Locash’s The Fighter as my feel-good summer album and I think I may have found a front runner for 2017 already in the form of Canada’s James Barker Band and their debut EP, ‘Game On’. Being an ice hockey fan I regularly listen to Calgary radio station Country 105, so have known about this group for a while and their three top ten hits, ‘Lawn Chair Lazy’, ‘Just Sayin’ and ‘Chills’. The four piece from Barrie, Ontario came to the public’s attention in Canada by winning the 2015 Emerging Artist Showcase at the Boots and Hearts music festival and in 2016 signed a deal with Universal Music Canada.

The six track EP opens with their number 3 hit, ‘Lawn Chair Lazy’. The feel-good lyrics start straight away for this sunny day track preparing you for a day in the garden without a care in the world except for whose going to get up to get the next beer – beer – beer. Just to prove not all country parties need to be heavy drinking nights at the river.

‘Just Sayin’ reached number 6 in the Canadian Country Chart on release in 2016. You’ve met the girl you want to leave the club with, so what is the harm in asking them leave sooner rather than later. I’m sure James Barker may have started a new chat up line with “I’m Just Sayin”.

Their most recent release, ‘Chills’, follows on from meeting the girl to now being in the relationship, every time you see the girl you get chills as she’s all yours and look forward to the next meeting. Clearly the I’m just sayin line worked!

‘It’s Working’ is the first of the newly released tracks. Feel good vibes are still in the air as a song with similar context to Chills as the room is now lightened up from the second the girl walks in and she doesn’t even know it and just needs to keep doing what she is doing now.

Despite previously knowing the three singles ‘Throwback’ is my favourite track on the album. As a year five primary school teacher the kids in my class wouldn’t have heard of most the technology mentioned in this track. Throwback encourages the listener to forget about mobile phones, HD TV’s and Sat Nav’s and instead enjoy the simple things in life – Vinyl, Mix Tapes, tuning the FM radio. Although being in England I doubt I would have heard of James Barker if it wasn’t for some of the modern-day technology!

The six track EP concludes with ‘Living The Dream’, the tale of living the simple life and making the most of it. Whether that be drinking beer till your too drunk to drive, dancing with girls and partying at weekends till the neighbours call the cops. Not exactly my idea of living the dream at 31 with a 5-year-old daughter but I’m not going to lie I’ve been known to do many of the things James Barker suggests in my past – probably more appreciated by 21-year-old me than at 31!!! 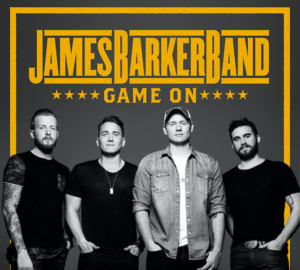 At the start of this review I suggested this could be an early contender for my Summer Feel Good Album of 2017 and I can promise you it doesn’t disappoint. Hopefully this EP will be the start of things to come for James Barker and we are sure to be hearing more from them. Fingers crossed they decide to make a trip across the pond soon as I’m sure they would draw a crowd from country music fans and the many Canadians who live in the UK who turn out to support their home nations artists. Let’s hope a full album is in the works soon.

One thought on “James Barker Band – Game On: A feel-good introduction to the Canadian county act”