In 2016 a piece of music history hit a big milestone. That piece of history was the first album recorded by Bob 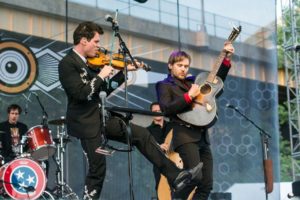 Dylan in Nashville – ‘Blonde on Blonde’. 2016 saw it’s fiftieth anniversary and, as such, a celebration of the album. Nashville string band Old Crow Medicine Show were recruited to perform the album from start to finish at the Country Music Hall of Fame in Music City. The show was a huge success and the band released it as a live album, and their first on Dylan’s home label of Columbia, earlier this year. Not content with the live record the band have now taken ’50 Years of Blonde on Blonde’ on the road. This Saturday saw the show hit the O2 Ritz in Manchester.

The Ritz is one of my favourite venues in the country with a nice big capacity but, with it’s high stage and great sound, remaining intimate. There was a great showing for this gig with OCMS clearly having a very large backing in the UK.

The band started the show coming out of a door at the back of the stage playing ‘Rainy Day Women #12 & 35’ with their instruments already strapped on. Right from the word go you could feel that Old Crow Medicine Show were going to bring their trademark energy to the show. The band moved around the stage dancing and getting the crowd involved as lead singer Ketch Secor exclaimed “Hello Manchester!”. From the get go the crowd were involved and singing along, especially to the chorus “everybody must get stoned!”

Exactly as the live album does the band moved through each song in the exact order that it appeared on Dylan’s original recording. It must be a tough thing to do to take another artists album, never mind a legend like Dylan and an album like ‘Blonde on Blonde’, and make it your own live but OCMS manage this with aplomb. Every song is greeted with the same enthusiasm from the band and crowd alike and there are no signs of a road weary band who have been playing the same setlist for months on end.

The band interacted with the crowd throughout in particular Ketch Secor who took time to tell stories of how the album was created and even shared his own personal story about seeing Dylan for the first time in New York – especially reflecting on the fact that he and childhood friend/OCMS member Critter Fuqua were sold fake LSD before the show by some Jamaican’s who “saw them coming” in a New York Park. Secor also reflected briefly on the link between the band and Dylan. I couldn’t believe it when he said how he’d never met Dylan despite finishing both Wagon Wheel and Sweet Amarillo which were begun by Dylan years ago.

One of the most interesting things, and perhaps most disappointing, on the night was the crowd’s reaction when Secor mentioned British band and friends and tour mates Mumford and Sons. There were a few boos that rang out and just a general feeling of distain. Secor was clearly quite shocked by this and almost looked around his band mates to say “is this for real?” I can’t quite put my finger on this negative feeling towards Mumford and Sons (I’m not particularly a fan myself) perhaps it’s due to their success however it seemed that OCMS were hoping to show their appreciation of one of our own to connect with the crowd.

One of the great things about watching OCMS live is the sheer talent of the musicians in the band. On the night each member must have played four or five instruments – Ketch Secor alone played fiddle, mandolin, harmonica, guitar and ukulele! Secor, Critter and Cory Younts all contributed vocals with the latter doing a brilliant job of ‘Leopard Skin Pillbox Hat’.

After the band had finished the whole of ‘Blonde on Blonde’ they came back on for an encore. Playing in the traditional bluegrass style huddled around one microphone they gave us some more Dylan hits from across his career in the form of ‘Knocking on Heavens Door’ and ‘Blowin’ in the Wind’ before going back to the full band for an rousing version of their co-written hit ‘Wagon Wheel’. This song got the biggest cheer of the night and led to a fantastic sing-a-long. The band rounded the show of with a rousing version of Dylan’s ‘Like A Rolling Stone’ before getting a thunderous applause from the crowd as they left the stage. One thing that’s for sure is that there is a lot of love for Old Crow Medicine Show in the UK and the crowd did everything possible to make sure that the band knew that. As for Mr Dylan, well, I have no doubt that he’d be proud to watch and listen to this tribute to one of his greatest works.

Hopefully we’ll see Old Crow Medicine Show return soon with new material and their first studio album on Columbia Records. I’m just hoping that they head back over the pond as soon as possible because this show was one of the best live performances that I’ve ever seen – in a market which has such differing styles as country music currently does these boys from Old Crow will seldom be matched in musicianship and enthusiasm!